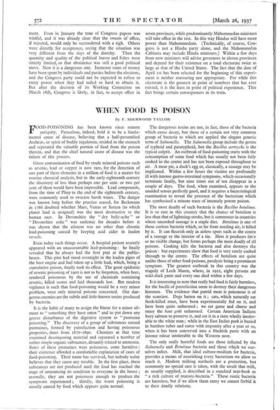 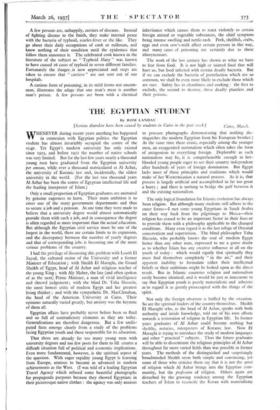 WHEN FOOD IS POISON

FOOD-POISONING has been known since remote antiquity. Paracelsus, indeed, held it to be a funda- mental cause of disease, believing that a half-personified Archeus, or spirit of bodily regulation, resided in the stomach and separated the valuable portion of food from the poison therein, and that the chief natural cause of disease was the failure of this process.

Gross contamination of food by crude mineral poisons such as arsenic, lead or copper is now rare, for the detection of one part of these elements in a million of food is a matter for routine chemical analysis, but in the early eighteenth century the discovery of less than perhaps one per cent. or two per cent. of them would have been impossible. Lead compounds, from the time of Pliny to the end of the eighteenth century, were commonly used to sweeten harsh wines. The danger was known long before the practice ceased, for Beckmann in 1786 doubted whether Mars, Venus or Saturn (to which planet lead is assigned) was the most destructive to the human race. In Devonshire the " dry belly-ache " or " Devonshire colic " was endemic for decades before it was shown that the ailment was no other than chronic lead-poisoning caused by keeping acid cider in leaden vessels.

Even today such things occur. A hospital patient recently appeared with an unaccountable lead-poisoning : he finally revealed that he always had the first pint at the public- house. This pint had stood overnight in the leaden pipes of the beer engine and had taken up a little lead, which, being a cumulative poison, finally took its effect. The great epidemic of arsenic poisoning of 19oo is not to be forgotten, when beer, rendered poisonous by the use of chemicals containing arsenic, killed scores and laid thousands low. But modern vigilance is such that food-poisoning would be a very minor problem, were only mineral poisons concerned. Our dan- gerous enemies are the subtle and little-known toxins produced by bacteria.

It is the habit of many to assign the blame for a minor ail- ment to " something they have eaten " and to put down any graver disturbance of the digestive system to " ptomaine poisoning." The discovery of a group of substances named ptomaines, formed by putrefaction and having poisonous properties, dates from 187o-189o. Chemists at that time examined decomposing material and separated a number of rather simple organic substances, distantly related to ammonia. Some of these ptomaines were poisonous, some harmless : their existence afforded a comfortable explanation of cases of food-poisoning. Their name has survived, but nobody today believes that they cause any trouble. In the first place, these substances are not produced until the food has reached the stage of announcing its condition to everyone in the house ; secondly, they are not poisonous enough to produce the symptoms experienced ; thirdly, the worst poisoning is usually caused by food which appears quite normal. The dangerous toxins are not, in fact, those of the bacteria which cause decay, but those of a certain not very common group of bacteria to which are applied the elegant generic term of Salmonella. The Salmonella group include the germs of typhoid and paratyphoid, but the Bacillus aertrycke is the typical culprit. An outbreak of food-poisoning starts with the consumption of some food which has usually not been fully cooked to the centre and has not been exposed throughout to air. A meat pie, a duck's egg or, classically, a sausage may be implicated. Within a few hours the victims are profoundly ill with intense gastro-intestinal symptoms, which occasionally terminate fatally, but nine times out of ten disappear in a couple of days. The food, when examined, appears to the unaided senses perfectly good, and it requires a bacteriological examination to reveal the presence of the bacterium which has synthesised a minute trace of intensely potent poison.

The most deadly of such bacteria is the Bacillus bolulinus. It is so rare in this country that the chance of botulism is less than that of lightning-stroke, but is commoner in countries where uncooked sausage is a staple diet. Botulinus is one of those curious bacteria which, so far from needing air, is killed by it. It can flourish only in airless spots such as the centre of a sausage or the interior of a tin. Here it produces litee or no visible change, but forms perhaps the most deadly-of all poisons. Cooking kills the bacteria and also destroys the poison : but experiments show that food is very rarely cooked through to the centre. The effects of botulism are quite unlike those of other food-poisons, paralysis being a prominent symptom. The greatest outbreak in this country was the tragedy of Loch Maree, where, in 1922, eight persons ate wild-duck paste and every one died within a few days.

It is interesting to note that really bad food is fairly harmless, for the bacilli of putrefaction seem to destroy their dangerous kinsmen. The evidence that putrid meat is poisonous is of the scantiest. Dogs batten on it ; cats, which naturally eat fresh-killed meat, have been experimentally fed on it, and have been quite unharmed ; we eat game and cheese and enjoy the /taut goat unharmed. Certain American Indians bury salmon to preserve it, and eat it in a state wholly intoler- able to the white man; while in the East Indies pork is buried in bamboo tubes and eaten with impunity after a year or so, when it has been converted into a blackish paste with an intense odour intolerable to the Western nose.

The only really harmful foods are those infected by the Salmonella and Botulinus bacteria and those vhich we our- selves infect. Milk, that ideal culture-medium for bacteria, provides a means of nourishing every bacterium we allow to reach it. Modern milking methods -are a protection, but commonly no special care is taken, with the result that milk, as usually supplied, is described in a standard text-book as " a rich culture of manure-bacteria." These rustic bacteria are harmless, but if we allow them entry we cannot forbid it to their deadly relations. A few persons are, unhappily, carriers of diseases. Instead of fighting disease to the finish, they make internal peace with the bacteria of typhoid, scarlet-fever or the like. They go about their daily occupations of cook or milkman, and know nothing of their condition until the epidemics that follow them announce it. The celebrated cook known in the literature of the subject as " Typhoid Mary " was known to have caused 26 cases of typhoid in seven different families. Fortunately the danger. is now appreciated and steps are taken to ensure that " carriers " are not sent out of our hospitals.

A curious form of poisoning, in its mild forms not uncom- mon, illustrates the adage that one man's meat is another man's poison. A few persons are born with a chemical inheritance which causes them to react violently to certain foreign animal or vegetable substances, the chief symptom being intense swelling and nettle-rash. Pork, shellfish, crabs, eggs and even cow's-milk affect certain persons in this way, and many cases of poisoning are certainly due to these idiosyncrasies.

The work of the last century has shown us what we have to fear from food. It is not high or tainted food that will hurt us, but food infected with certain deadly bacteria. But if we can exclude the bacteria of putrefaction which are so common, we shall be even more likely to exclude those which are rare. Safety lies in cleanliness and cooking : the first to exclude, the second to destroy, these deadly plantlets and their poisons.