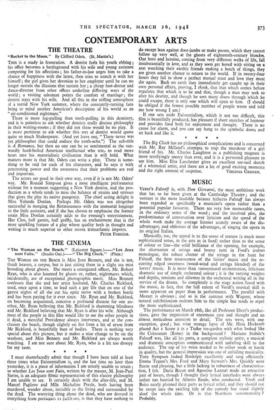 THE WOMAN ON THE BEACH is Miss Joan Bennett, and she is not, thank heaven, a corpse, but is just sitting there in a slight sea mist brooding about ghosts. She meets a coastguard officer, Mr. Robert Ryan, who is also haunted by ghosts or, rather, nightmares which, incidentally, are of exceptional photographic merit. Miss Bennett confesses that she and her artist husband, Mr. Charles Bickford, used, once upon a time, to lead such a gay life that on one of the gayest nights of all she cut his optic nerve with a broken bottle and has been paying for it ever since. Mr. Ryan and Mr. Bickford, on becoming acquainted, conceive a profound distaste for one an- other, Mr. Ryan believing that Mr. Bickford is shamming blindness and Mr. Bickford believing that Mr. Ryan is after his wife. Although most of the people in this film would like to see the other people in it dead, a merciful Providence always intervenes, and at the con- clusion the beach, though slightly on fire from a bit of arson from Mr Bickford, is beautifully bare of bodies. There is nothing very special about this picture, but it makes a nice change to be on the seashore, and Miss Bennett and Mr. Bickford are always worth watching. I am not sure about Mr. Ryan, who is a bit too droopy for my taste.

I must shamefacedly admit that though I have been told at least three times what Existentialism is, and the last time no later than yesterday, it is a piece of information I am utterly unable to retain ; so whether Les 7eux sont Faits, written by the master, M. Jean-Paul Sartre, is an adequate filmic representation of this elusive philosophy I am unable to say. It certainly deals with the after-life, and M. Marcel Pagliero and Mlle. Micheline Presle, both having been murdered, wander about, invisible to the living and surrounded by the dead. The worrying thing about the dead, who are dressed in everything from perruques to jackboots, is that they have nothing to do except lean against door-jambs or make passes, which they cannot follow up very well, at the ghosts of eighteenth-century blondes. Our hero and heroine, coming from very different walks of life, fall insubstantially in love, and as they soon get bored with sitting on a seat watching their earthly friends making a botch of things, they are given another chance to return to the world. If in twenty-four hours they fail to show a perfect mutual trust and love they must die again. Back on earth they immediately get caught up in their own personal affairs, proving, I think, that that which comes before regulates that which is to be and that, though a man may seek to alter his destiny, and though he sees many doors through which he could escape, there is only one which will open to him. (I should be obliged if the fewest possible number of people wrote and told me how wrong I am.)

If one sets aside Existentialism, which it not too difficult, this film is beautifully produced, has pleasant if short snatches of humour and provides food both for enjoyment and thought. There is no cause for alarm, and you can say hang to the symbolic doors and sit back and like it.

The Big Clock has no philosophical complications and is concerned with Mr. Ray Milland's attempts to trap the murderer of a girl friend of his. Mr. Charles Laughton as a publishing magnate is more terrifyingly sneery than ever, and it is a perverted pleasure to see him. Miss Elsa Lanchester gives an excellent toe-nail sketch of a whimsical artist, and there are a lot of good exciting moments