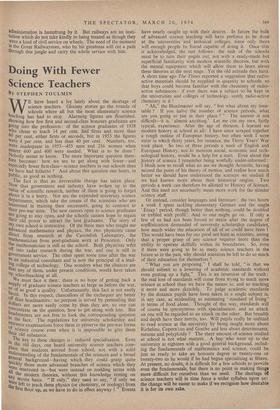 BY STEPHEN TOULMIN E have heard a lot lately about the shortage of science teachers. Gloomy stories go the rounds of schools where all but the most elementary science teaching has had to stop. Alarming figures are flourished, showing how few first and second-class honours graduates are going into the profession: of the science graduates of 1938 Who chose to teach 14 per cent. had \firsts and more than 60 per cent. either firsts or seconds, but in 1953 the figures Were 4 per cent. and less than 40 per cent. Numbers, too, Were inadequate in 1953-455 men and 216 women when nearer 600 and 400 were needed. What is to be done ? Nobody seems to know. The more important question there- fore becomes: how we are to get along with fewer—and especially fewer first-class—science teachers in our schools than We have had hitherto ? And about this question one hears, in Public, as good as nothing. The fact is that an irreversible change has taken place. Now that government and industry, have woken up to the value of scientific research, neither of them is going to forget about it in a hurry. Nor are the expanded university science departments, which take the cream of the scientists who are interested in training their successors, going to contract to their pre-war sizes. The new careers open to science graduates are going to stay open, an& the schools cannot hope to regain their old power to attract the best graduates. The story of my own school is instructive. Of the three men who taught me advanced mathematics and physics, the two physicists came direct from research at the Cavendish Laboratory, the mathematician from post-graduate work at Princeton. Only 1 " the mathematician is still at the school. Both physicists went '0_11 into radar research during the war, and one is still in government service. The other spent some time after the war ts an industrial consultant and is now the principal of a lead- _ 8 college of technology. One wonders what the chances are - that any of them, under present conditions, would have taken uP schoolteaching at all. We must face it then: there is no hope of getting back a supply of graduate science teachers as large as before the war, tOr of as good a quality. Unfortunately, this fact is not easily Laced. In this respect, chancellors of the exchequer are better dollars than headmasters: no purpose is served by pretending that uollars are more easily come by than they are, so one can headmasters on the question, how to get along with less. But ueadmasters are not free to look the corresponding question In the face. The regulations for university scholarship and entrance examinations force them to preserve the pre-war forms of science course even when it is impossible to give them their old substance. The key to these changes is: reduced specialisation. Even pt he old days, one heard university science teachers corn- aio that students arrived from school, not with a solid understanding of the fundamentals of the sciences and a broad general background—having which they could grasp quite Quickly those more advanced branches of science which they Were re interested in—but were instead on nodding terms with all the modern theories, without this knowledge resting on any secure basis. " If only," they used to say, " if only we Were left to teach them physics (or chemistry, or zoology) from the first floor up, as.we have to do in effect anyway 1 ' Events have nearly caught up with their desires. In future the bulk of advanced science teaching will have perforce to be done at the universities and techhical colleges, since only there will enough people he found capable of doing it. Once this is acknowledged, the rest follows : the task of the schools must be to turn their pupils out, not with a ready-made but superficial familiarity with modern scientific theories, but with the mental equipment which will allow them to learn about these theories at the next stage. Yet the old attitude dies hard. A short time ago The Times reported a suggestion that radio- active materials should be supplied in quantity to schools, so that boys could become familiar with the chemistry of radio- active substances : if ever there was a subject to be kept in the universities and colleges of technology, surely radio-active chemistry is it !

" Ah," the Headmaster will say, " but what about my time- table ? If you halve the number of science periods, what are you going to put in their place ? " The answer is not difficult—it is, ' almost anything. Let me cite my own, fairly typical, experience. After the age of thirteen. 1 learned no, modern history at school at all : I have since scraped together a rough outline of European history, but often 'wish I were surer in which thirty years, for instance, the Thirty Years' War took place. So two or three periods a week of English and European History, not to mention social, economic and tech- nological history, would be a help for a start. Even about the fiistory of science I remember being woefully under-informed : I blush now to recall what an ass we thought Aristotle, having missed the point of his theory of motion, and realise how much better we should have understood the sciences we studied if we had known more about their historical origins. Two periods a week can therefore be allotted to History of Science. And this need not necessarily mean more work for the slender science staff.

Or instead, consider languages and literature : the two hours a week I spent tackling elementary German and the single Essay' period, though better than nothing, could' be doubled or trebled with profit. And so one might go on. If only a few of us had not been forced to strain after the degree of sopliistication demanded of university scholarship candidates, how much wider the education of all of us could have been 1 This would have been for our good not least as scientists, seeing that a proper grasp of any science requires more than the ability to operate skilfully within its boundaries. So, even if there were going to be as many science teachers in the future as in the past, why should scientists be left to do so much of their education for themselves ?

" What you are proposing," I shall be told, " is that we should submit to a lowering of academic standards without even putting up a fight." This is an inversion of the truth: the real loss of standards will come from trying to teach more science at school than we have the means to, and so teaching it more and more sketchily. To judge academic standards by the distance pupils have been taken in a single subject is, in any case, as misleading as estimating standard of living' in terms of food alone. Thought of this way, standards will of course be synonymous with specialisation, and an attack on one will be regarded as an attack on the other. But breadth and depth have their merits, too. Will pupils really be unfitted to read science at the university by being taught more about Richelieu, Copernicus and Goethe and less about determinants, mesons and polyploidy ? The sheer amount of science studied at school is not what matters. A boy who went up to the university at eighteen with a good general background, includ- ing the fundamentals of mathematics and science, could be just as ready to take an honours degree at twenty-one or twenty-two as he would if he had begun specialising at fifteen. At present, no doubt, it is difficult for a few schools to provide even the fundamentals, but there is no point in making things more difficult for ourselves than we need. The shortage or science teachers will in time force a wider syllabus upon us: the change will be easier to make if we recognise how desirable it is for its own sake.