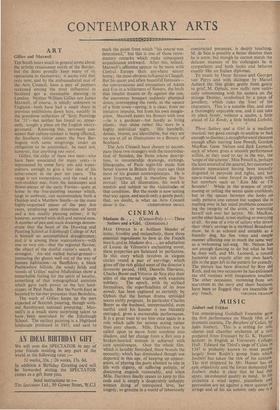 Three Sailors and a Girl is a medium musical, not

good enough to analyse or bad enough to dismiss; a straightforward pleasant enough affair starring Jane Powell, Gordon MacRae, Gene Nelson and Jack Leonard, each of whom gives a smooth performance within, as they used to say in the war, the 'scope of the scheme'. Miss Powell is, perhaps the least assured of the quartet, her customary demure appearance- having been uneasily disguised in peroxide and tights, and her opera-trained voice forced to grapple with hot numbers such as Kiss Me or I'll Scream! ' While in the process of strip- teasing or yelling she seems quite confident, but in the spaces between she looks so sadly pensive one cannot but suspect she is mulling over in her mind problems concern- ing the integrity of the artist, or worrying herself sick over her larynx. Mr. MacRae, on the other hand, is not mulling or worrying at all. As one of a trio of sailors who invest their ship's savings in a mythical Broadway show, he is as relaxed and amiable as a friendly dog, his fine voice and simple manner affecting one in much the same way as a welcoming tail-wag. Mr. Nelson ha not enough dancing to do but what he h he does well, and Mr. Leonard, a rotun humorist not exactly after my own heart, fills in the gaps left in the pattern for comedy. The picture has been directed by Roy de Ruth, and on two occasions he has enlivene the old routines with imaginative touches. The other occasions, stemming from se starvation in the navy and show business, have been so flogged they are insensible