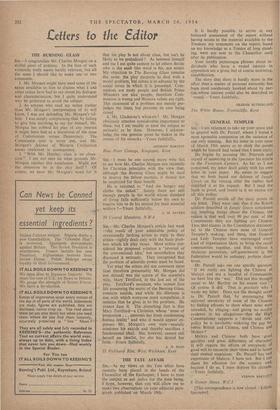 SIR,—Mr. Charles Morgan's article last week —the result of your

admirable policy of occasionally , inviting artists to reply to their critics—rightly dealt only with the basic prob- lem which his play raises. Most critics con- sidered his proposed solution a reversal of the conventional idea,' but nevertheless they discussed it seriously. They recognised that the problem of scientific power must be faced.

Yet what the critics did not comment upon (and therefore presumably Mr. Morgan did not defend) was the action of the scientist's wife, Mary Terriford, in the last act of the play. Terriford's assistant, who cannot face life possessing the secret of the Burning Glass, commits suicide, and' while his dilemma is one with which everyone must sympathise, it remains that he gives in to the problem. He cannot face it. The disturbing fact is that Mary Terriford—a Christian, whose sense of proportion . .. prevents her from condemning human frailty' and who it would appear ex- presses Mr. Morgan's own view—morally condones his suicide and thereby sacrifices a fundamental Ideal. She, however, cannot call herself an idealist, for she has denied her faith.—Yours faithfully,