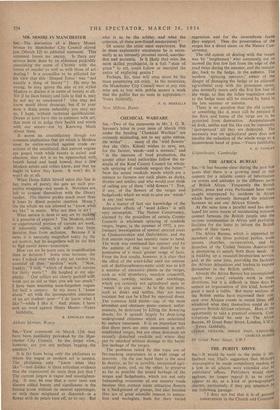 CHEMICAL WARFARE SIR,—Two of the statements in Mr. J. G.

R. Stevens's letter in your issue of March 19th under the heading ' Chemical Warfare' are seriously misleading, not to say quite untrue. He writes" . . . many of the wild flowers' that she (Mrs. Kitcat) wishes to save, are, for the farmer, weeds—and a menace," and " in the interests of food production, the sooner other local authorities follow the ex- ample of the Kent County Council (in whole- sale spraying of roadside verges) the better." Now the actual roadside weeds which are a menace to farmers are such plants as docks, thistles and nettles; and who would ever think of calling any of them wild flowers ' ? Few, if any, of the flowers of the verges and hedgebanks which we wish to save are ' weeds' in any real sense.

As a matter of fact our knowledge of the destructive effects of ' weed killers' is still very incomplete. The Nature Conservancy, alarmed by the procedure of certain County Councils in wholesale spraying of roadside verges, began, in the summer of 1952, a pre- liminary investigation of several sprayed areas in Gloucestershire and Oxfordshire, and the first interim report has recently come to hand.

he work was continued last summer and by the autumn of this year we should he in possession of a much greater range of facts. From the first results, however, it is clear that the effect of the weed-killer used (an amione salt of dichlorophenoxyacctic acid) was to kill a number of attractive plants in the verges, such as wild strawberry, meadow cranesbill, rockrose, cowslip, vetches and vetchlings, which are certainly not agricultural pests or weeds' in any sense. As to the real pests, such as docks and nettles,. they are more resistant but can be killed by repeatLid doses. The common field thistle—one of the most abundant and obstinate pests—cannot, unfor- tunately, be destroyed by killing the flowering shoots, for it spreads largely by deep-lying underground rhizomes which are unharmed by surface treatment. It is an important fact that these pests are only occasional in well- established verges, but are often dominant on recently disturbed roadside soil where they can be attacked without damage to the harm- less herbage of the verges.

The problems raised by this topic are of far-reaching importance t6 a wide range of interests. On the one hand there is the need to destroy, as far as possible, recognised agri- cultural pests, and, on the other, to preserve as far as possible the mixed herbage of the verges and hedgebanks, which are not only outstanding ornaments of our country roads because they contain many attractive flowers in a background of grasses, but also because they are of great scientific interest to natura- lists and ecologists, both for their varied

vegetation and for the invertebrate fauna they support. Thus the preservation of the verges has a direct claim on the Nature Con, servancy.

The old system of dealing with the verges was by ' lengthsmen ' who commonly cut or mowed the first few feet from the edge of the road twice during the summer, and the remain- der, back to the hedge, in the autumn. The modern 'spraying operator,' aware of the danger of damaging the hedge or an adjacent agricultural crop with his poisonous spray, also normally treats only the first few feet of the verge, so that the fallen vegetation close to the hedge must still be cleared by hand in the late summer or autumn.

There is no question that the old system, or something like it, must still be pursued if the flora and fauna of the verge are to be protected from destruction. Accumulations of dock, nettles and the like can be repeatedly ' spot-sprayed' till they are destroyed. The necessary war on agricultural pests does not involve the reduction of the whole verge to a monotonous band of grass.—Yours faithfully,