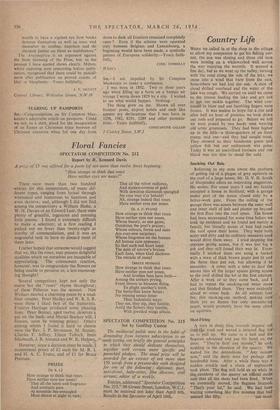 Referring 'to my note about the problem of getting rid of a plague of grey squirrels in the roof of a large house, Mr. D. V. H. Smith of Harpenden offers an interesting suggestion. He writes: For some years I and my family occupied a house in Scotland, with a garage under part of the house closed only by a lattice-work gate. From the ceiling of the garage there was access between the outer wall and inner shell of lath and plaster up beyond the first floor into the roof space. The house had been unoccupied for some time before we took up residence and we found not merely a family, but literally scores of bats had made the roof space their home. They were both noisy and dirty and no ordinary measures used would drive them away. I tried stopping the crevices giving access, but it was too big a job and they still found their way in. Even- tually I smoked them out using a bucket with a mass of thick brown paper just lit and the flame then put out, but allowing it to smoulder. A cover with a tube to lead the smoke into all the larger spaces giving access to the roof shifted the lot at the first attempt. After a week or so they came back, and I had to repeat the smoking-out twice morn and that finished them. They were evidently afraid to come back. As all animals fear fire, this smoking-out method, making sure there are no flames but only smouldering paper, would probably have the same cltect on squirrels.