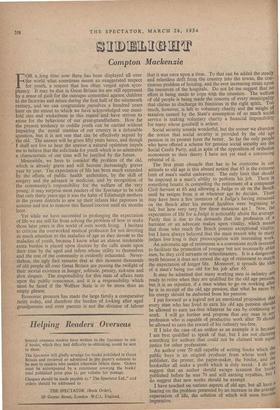 Meanwhile, we have to consider the problem of the old, which is already grave and will become increasingly graver year by year. The expectation of life has been much extended by the efforts of public health authorities, by the skill of surgery and the advance in medicine, and by recognition of the community's responsibility for the welfare of the very young: it may surprise most readers of the Spectatyr to be told that only thirty years ago it was the habit of Edinburgh mothers in the poorer districts to sew up their infants like papooses in autumn and not to remove this flannel cocoon until six months later. that it was once upon a time. To that can be added the steady and relentless drift from the country into the towns, the con- tinuous problem of housing, and the ever increasing strain upon the resources of the hospitals. Do not let me suggest that no effort is being made to cope with the situation. The welfare of old people is being made the concern of every municipality that claims to discharge its functions in the right spirit. Too much, however, is left to voluntary charity and the weight of taxation caused by the State's assumption of so much social service is making voluntary charity a financial impossibility for many whose goodwill is ardent. - Social security sounds wonderful, but the sooner we abandon the notion that social security is provided by the old ago pension in its present forth the better. So far the only people who have offered a scheme for genuine social security are the Social Credit Party, and in spite of the opposition of orthodox economists to their theory I have not yet read a convincing rebuttal of it.

The first great obstacle that has to be overcome in our attitude to old age is this absurd notion- that 65 is the extrema limit of man's useful endeavour. The only limit that should be imposed is a man's ability to perform his job. There i9 something lunatic in compelling the retirement of a competent Civil Servant at 65 and allowing a Judge to sit on the Bench until he resigns from it at whatever age he decides. There may have been a few instances of a Judge's having remained on the Bench after his mental faculties were beginning to fail, but how very very few those instances are ! Now, the expectation of life for a Judge is noticeably above the average. Partly that is due to the demands that the profession of a barrister or an advocate makes upon vitality, which means that those who reach the Bench possess exceptional vitality, but I have always believed that the main reason why so many judges live long is their preoccupation with interesting work. An automatic age of retirement is a convenient myth invented to facilitate the promotion of younger but not necessarily abler men, be they civil servants or schoolmasters. It is a dangerous myth because it does not extend the age of retirement to match the expectation of longer life. Moreover, it spreads the idea of a man's' being too old for his job after 65. It may be admitted that many working men in industry aro ready to retire when they are qualified for the old age pension, but it is an injustice, if a man wishes to go on working after he is in receipt of the old, age pension, that what he earns by his energy should be deducted from his pension. I put forward as a logical not an emotional proposition that, every man who has lived to earn his old age pension should