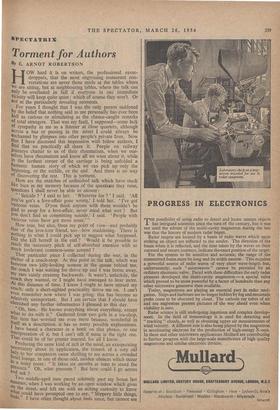 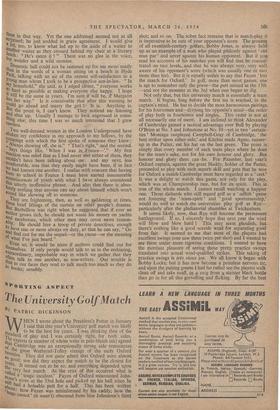 BY E. ARNOT ROBERTSON OW hard it is on writers, the professional eaves- droppers, that the most engrossing restaurant con- versations are never those made at the tables where Nye are sitting, but at neighbouring tables, where the talk can Only be overheard in full if everyone in our immediate vicinity will keep quite quiet: which of course they won't. Or not at the particularly revealing moments. For years I thought that I was the only person saddened half the belief that nothing said to me personally has ever been nalf as curious or stimulating as the chance-caught remarks of total strangers. That was my fault, I supposed—some lack of sympathy in me as a listener at close quarters, although across a bus or passing in the street I could always be enchanted by glimpses into other people's private lives. Now that I have discussed this impression with fellow authors, I find that we practically all share it. People on railway Journeys chatter to us of their rheumatism, when we our- selves have rheumatism and know all we want about it, while In the furthest corner of the carriage is being unfolded a fantastic human story of which we can pick up only the beginning, or the middle, or the end. And there is no way of discovering the rest. This is torment. Here are the snatches of unfinished talk which have stuck like burs in my memory because of the questions they raise, questions I shall never be able to answer: " ' Suicide ? ' I said to her. ' Whatever for ? ' I said. 'All You've got's a love-affair gone wrong,' I told her. ' I've got Varicose veins. D'you think anyone with them wouldn't be glad to swap for a love-affair, never mind what sort ? But You don't find us committing suicide,' I said. ' People with varicose veins have got more sense.' " How true, but also, from my point of view—and probably that of the love-lorn friend, too—how maddening. There is nothing in what I could pick up to suggest what happened. Did she kill herself in the end ? Would it be possible to reach the necessary pitch of self-absorbed emotion with so much irrelevant common-sense around ?

That particular piece I collected during the war, in the shelter of a coach-stop. At this point in the talk, which was between two jolly-looking women in the queue behind me, the coach I was waiting for drove up and I was borne away, ntY ears vainly straining backwards. It wasn't, unluckily, the Coach they wanted, or I might have managed to hear more. At this distance of time, I know I ought to have missed my Coach; only a short-sighted practicality drove me on. I can't even remember now where I was going; this has become so relatively unimportant. But I am certain that I should have cherished any further information I gleaned to this day. " Oh, him. He knows everything about everything, except What to do with it." Gathered from two girls in a tea-shop, this item has worried me even more because, wonderful in Itself as a description, it has so many possible explanations. ! have based a character in a book on that phrase, or one Interpretation of it, but I can't tell if mine is the right one. That could be of far greater interest, for all I know. Producing the same kind of itch in the mind, an exasperating ,IIncertainty about its application, the remark of a very old tadY to her companion came shrilling to me across a crowded in lounge, in one of those odd, sudden silences which occur In a noisy room: " It takes six months at least to stand the Pressure." Oh, what pressure ? But how could I go across and ask ? them • in that way. Yet the one addressed seemed not at all "urPrised; he just nodded in grave agreement. I would give a lot, too, to know what led up to the aside of a waiter to another waiter as they crossed behind my chair at a literary Lunch " He's eaten it ! " There was no glee in the voice, but wonder and a wild surmise.

# Domestic hell could not be summed up for me more neatly Pan in the words of a woman sitting on a bench in Hyde ,,ark, talking with an air of the utmost self-satisfaction to a /citing man whom I took to be a prospective son-in-law. " In tnY household," she said, as I edged closer, " everyone works as hard as possible at making everyone else happy. I hope it will be the same in yours. I'm sure it will be, if Margaret has her way." Is it conceivable that after this warning he ,Tald go ahead and marry the girlAnything is. lt the point is, I can't know. They noticed me listening taAd shut up. Usually I manage to look engrossed in some- Lung else; this time I was so much interested that I grew careless.

, Two well-dressed women math e London Underground have shaken my confidence in my pproach to my fellows, by the FeTte, mpt with which the first spoke of someone they knew : 4(11, Always showing off, she is." " That's right," said the second. ‘oays things like, ' When I was in France—'." My first reaction was relief that as I had never met either of them, they couldn't have been talking about me : and my next, less comfortable, was that they easily might have been, if in fact bIt had known one another. I realise with concern that having cell to school in France I must have started innumerable reminiscences of youth with what I have always considered , ilds utterly inoffensive phrase. And also that there is abso- 'ROY nothing that anyone can say about himself which won't sound like showing off to someone. tk They are frightening, then, as well as saddening at times, e brief liftings of the curtain on other peo's dramas. 1-it Barbellion was right when he suggested thpatle if ever an glithor grows rich, he should not waste his money on yachts aa,nd racehorses, which other men may covet more reason- CIY. He should hire a troop of private detectives, enough .2 have one or more always on duty, so that he can say, " Go and find out for me the sequel—or the cause—or the meaning of what I've just heard." Even so, it would be nicer if authors could find out for themselves. If only people would talk to us in the endearing, extraordinary, improbable way in which we gather .that they en talk to one another, as non-writers. Our trouble is that to our faces they tend to talk much too much as they do "". woks; sensibly.