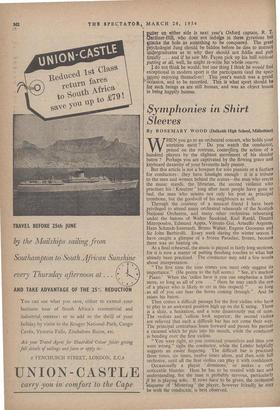 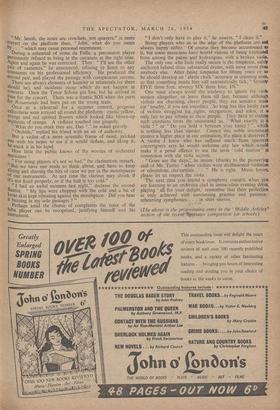 By ROSEMARY WOOD (Dalkeith High School, Midlothian) HEN you go to an orchestral concert, who holds your attention most ? Do you watch the conductor, poised on the rostrum, controlling the action of a hundred players by the slightest movement of his slender baton ? Perhaps you are captivated by the flowing grace and keyboard dexterity of your favourite lady pianist. But this article is not a bouquet for solo pianists or a fanfare for conductors : they have limelight enough : it is a tribute to the men and women behind the scenes—the man who erects the music stand's, the librarian, the second violinist who practises his ` Kreutzer ' long after most people have gone to bed, the man who retains not only his post as principal trombone, but the goodwill of his neighbours as well.

Through the courtesy of a musical friend I have been privileged to attend many orchestral rehearsals of the Scottish National Orchestra, and many . other orchestras rehearsing under the batons of Walter Susskind, Karl Rankl, Dimitn Mitropoulos, Edmund Appia, Vittorio Gui, Artaulfo Argenta, Hans Schmidt-Isserstedt, Bruno Walter, Eugene Goossens and Sir John Barbirolli. Every week during the winter season I have caught a glimpse of a frozen Paradise, frozen, because there was no heating on.

At a final rehearsal, the music is played in fairly long sections, for it is now a matter of putting finishing touches to what has already been practised. The conductor may add a few words about interpretation.

" The first time the tune comes you must only suggest its importance." (He points to the full score.) " See, it's marked ' Piano.' When the 'cellos have it you can emphasise a little more, so long as all of you . . . " (here he may catch the eye of a player who is likely to err in this respect) " . . . so long • as all of you can hear the horns coming through." And ha raises his baton.

Then comes a difficult passage for the first violins who have to play in an awkward position high up on the E string. There is a slide, a hesitation, and a note disastrously out of tune. The violists and 'cellists look superior; the second violins are relieved that such a difficult bar has not come their Way. The principal contrabass leans forward and passes his partner a caramel which he puts into his mouth, while the conductor is bending over the first violins. " You were right, so you corrected yourselves and then you were wrong," sighs the conductor, while the Leader helpfully suggests an easier fingering. The difficult bar is practised three times, six times, twelve times alone, and then with full orchestra, until all the first violins can, play it with confidence. " Mr. Smith, the notes are crotchets, not quavers," is more correct on the platform than, " John, what do you mean by " which may cause personal resentment. During a rehearsal of some da Falla, a percussion player persistently refused to bring in the castanets at the right time. Again and again he was corrected. Then : " I'll use the other Pair of castanets," he announced, refusing to listen to any comments on his professional efficiency. He produced the second pair, and played the passage with conspicuous success. There are always elements of humour at rehearsals (or there should be), and incidents occur which do not happen at concerts. Once the Tenor Soloist got lost, but he arrived in Vine for the concert. There was a frantic SOS when the parts for Rosamunde had been put on the wrong train. Once at a rehearsal for a summer concert, gorgeous calceolaria were arrayed all round the platform: exotic yellow, orange and red spotted flowers which looked like blown-up segments of orange. A violinist touched one gingerly. " What do you think they are, Dan ? " he asked gravely. " Orchids," replied his friend with an air of authority. But a violist of a more scientific frame of mind, pricked he with his tiepin to see if it would deflate, and liking it, ne stuck it in his lapel. How little the public knows of the worries of orchestral Musicians !

, "For string players it's not so bad," the clarinettists remark, "But we have our reeds to think about, and have to keep Slicing and shaving the bits of cane we put in the mouthpieces 91 our instruments. At any time the clarinet may shriek if it's not fixed properly, or if the hall is too cold." ,,, "I had an awful moment last night," declares the second flautist. " My lips were chapped with the cold and a bit of loose Skin kept vibrating against the mouthpiece. Did you hear it buzzing in my solo passages ? " don't only have to play it," he asserts, " I clean it."

String players who sit at the edge of the platform are• nal always happy either. Of course they become accustomed ID it, but some musicians have horrid visions of being extricated from among the palms and hydrangeas, with a broken violist.

The only one who feels really secure is the timpanist, safely anchored behind three substantial drums, with more room then anybody else. After being timpanist for fifteen years or so he should develop an alarm clock' accuracy in counting rests. so that something inside him will automatically tick, " Seventy FIVE three four, seventy SIX three four, 1N."