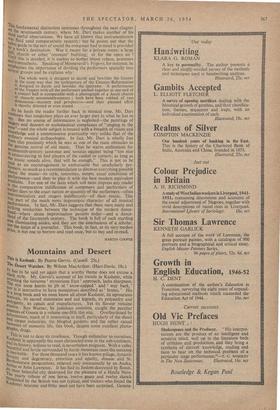 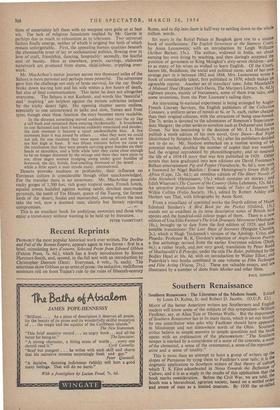 Page 29, 26 March 1954 — tions of uncertainty left them with no weapons save guile
Close

tions of uncertainty left them with no weapons save guile

or at best wit. The lack of religious fanaticism implied by Mr. Gervis is perhaps due as much to exhaustion as to tolerance. Two universal factors finally emerge, neither of which is origina) but both of which remain unforgettable. First, the appealing human qualities beneath the abominable crust of lay or ecclesiastical politics, flowing over in love of craft, friendship, dancing, hospitality: secondly, the fearful cost of beauty. Here as elsewhere, jewels, carvings, elaborate metalwork are produced from slums, child-labour, crippling over- work.

Mr. MacArthur's motor journey across two thousand miles of the Sahara is more personal and perhaps more powerful. The adventure gave him the challenge not only of brute survival, for the car finally broke down leaving him and his wife within a few hours of death, but also of final communication. This latter he does not altogether overcome. The Sahara is not Kashmir, and words like 'beautiful' and ` inspiring' are helpless against the minute subtleties induced by the tricky desert light. His opening chapter seems endless, especially to one uninterested in jacks and slots, frames and front tyres, though once these function the story becomes more readable.

In the distance something moved suddenly, shot into the air like

a tall bush and remained there swaying rhythmically. It broadened, its top flattened and then it became suddenly emaciated and slender; the next moment it became a squat unidentifiable blur. A -few moments later it was joined by others . . . what they were we could not tell, for one moment they were squat and small and the next ten feet high at least. It was fifteen minutes before we came to the conclusion that they were people carrying great bundles on their heads or shoulders, and a little while later they came close enough to be no longer distorted by the mirage and there they were plain to see, three negro women trudging along under great bundles of firewood, the dry, brittle, foul-smelling firewood of the desert . . . while a little apart a man strode easily, unconcerned.

Deserts -provoke madness or profundity, their influence on European culture is considerable though often unacknowledged. For the traveller there is no monotony. Mr. MacArthur passed rocky gorges of 1,500 feet, rich 'peen tropical oases, French hotels, squalid towns huddled against wailing sands, desolate man-made pyramids, the tomb of Tin Hinam, queen of the Tuareg, the former lords of the desert, feudal and matriarchal, among whom the men take the veil, now a doomed race, silently but fiercely rejecting compromises.

This is an excellent book for ambitious motorists and those who enjoy a travel-story without wanting to be held up by literature. PETER VANSITTART