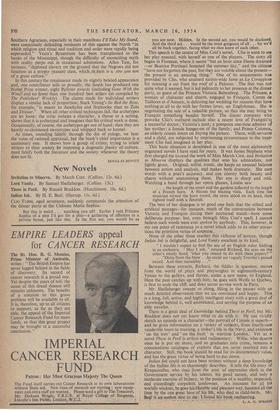 CLIO Tuns, aged seventeen, suddenly commands the attention of the dinner party at the Chateau Maria Sophia: But this is weird . . . watching you all! Earlier I told Princess Sophia of a plot I'd got for a play—a gathering of affinities in a private house, just like this. In the first act, you would be as you are now. Hidden. In the second act, you would be disc

And the third act .. . would be the most gorgeous of all ... for we'd. all be back together, facing what we then knew of each other.

This speech is the centre of Miss Cost's novel. Clio is soon to see her play enacted, with herself as one of the players. The story all began in Florence, where it seems "but an hour since Dante dreamed —or Beatrice Portinari breasted the summer day," and the citizens "have not forgotten the past, but they are voluble about the present— the present is an amazing thing." One of its amazements was provided by Clio, who attained nation-wide fame as La Coraggiosa for rescuing a cat from the roof of a Palazzo. The feat was not quite what it seemed, but it led indirectly to her presence at the dinner party, as guest of the Princess Victoria Babenberg. The Princess, a woman of character and charm, engaged to Francois, Comte do Taillores et d'Annecy, is deferring her wedding for reasons that have nothing at all to do with her former lover, an Englishman. She is negotiating the sale of a valuable picture, so that she may bring to Francois something besides herself. The dinner company who provoke Clio's outburst include also a recent love of Frangois's1 a masterful doctor; Victoria's aunt; a pompous one-time admirer a her mother; a female hanger-on of the family; and Prince Colonna, an elderly cousin intent on buying the picture. These, with servants and a child, are subjected by imprisoning circumstance to the treat- ment Clio had imagined in her play.

This basic situation is developed in one of the most elaborately organised novels I have read for years. It was James Stephens who first charged me to.read the work of Miss March Cost, and Invitation to Minerva displays the qualities that won his admiration, not lightly given. Original, wilful, ironic, she keeps an unusual balance between action and analysis, mid makes both dramatic. She uses words with a poet's accuracy, and can convey both beauty and charm without anatomising them. Her eye is sharp and odd. Watching a band through her opera glasses, Louise saw . . . the length of the street and the gardens reflected in the length of a French horn. A minute but blazing vista. Each time the musician turned the horn round, the town stood on its head, then righted itself with a flourish.

The best of her dialogue is so good one feels that the stilted and artificial passages—for instance, much of the conversation between Victoria and Francois during their nocturnal watch—have some deliberate purpose: but, even beneath Mist Cost's spell, I cannot believe such words were ever spoken by anybody. This, however, is my one point of resistance to a novel which adds to its other attrac- tions the primitive virtue of suspense.

None of the other three reaches this richness of texture, though Indian Ink is delightful, and Lord Vanity excellent in its kind.

in an orchestra. May I ask, ' returned Richard, his eyes on the other's steady hand, 'what you intend to do with these papers?' " . . ."Dizzy from the blow .. .he could see vaguely Tromba's poised sword. And then incredibly . . ."

Between these extracts, Richard, the fiddler in question, moves from the world of plays and playwrights in eighteenth-century Venice to the galleys, and thence, under a new name, to England. Here the past catches up with him; he goes with Wolfe to Quebec, is first to scale the cliff, and does secret service work in Paris.

Mr. Shellabarger sweeps us along, filling in the pauses with so much detailed observation that we are convinced and happy. This is a long, full, active, and highly intelligent story with a great deal of knowledge behind it, well assimilated, and serving the purpose of an able novelist.

There is a great deal of knowledge behind Those in Peril, bin Mr.

Braddon does not yet know what to do with it. He can vividly sketch an episode or a character—the portrait of Connie is superb— and he gives information on a variety of subjects, from fourth-rate vaudeville tours to trawling, a stoker's life in the Navy, and existence ' on the trot' and ' on the bash ' in wartime London. Yet as a novel Those in Peril is artless and rudimentary. Willie, who deserts once he is put on shore, and so graduates into crime, remains a conscientious catalogue of exploits that are never resolved into a character. Still, the book'should be read for its documentary value, and has the great virtue of being hard to put down.

Indian Ink could not have been written without a deep knowledge of the Indian life it so charmingly describes. It tells the life story of Krupasindhu, who rises from the post of apprentice clerk in the Government service by his talents, his good nature, and only a moderate exercise of bribery, to the position of a wealthy, respected, and exceedingly corpulent landowner. An innocent for all his worldly wisdom, he goes his likeable and pleasant way, haunted all the time by the one great love .of his life, who died in child-birth. Mr. 1341 is an author new to the: I fotind his book enchanting.