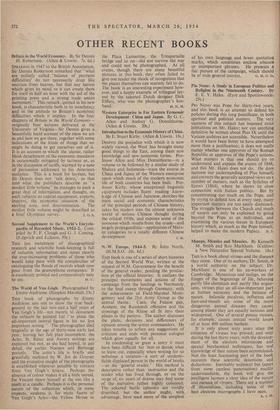 By G. C. Allen and Audrey G. Donnithorne. (Allen & Unwin. 20s.) Introduction to the Economic History of China. By E. Stuart Kirby. (Allen & Unwin. 18s.) DESPITE the prejudice with which it is now widely viewed, the West has brought many good things to the East, among them new knowledge and new economic forms. Pro- fessor Allen and Miss Donnithome—in a volume to be followed by a similar study of Malaya and Indonesia—trace the course in China and Japan of the Western enterprise upon which much of the modem economic life of both countries has been built. Pro- fessor Kirby, whose exceptional linguistic equipment includes fluent reading know- It.dge of Chinese and Japanese, sketches the main social and economic characteristics of the principal periods of Chinese history, takes his readers into the almost unknoWn world of serious Chinese thought during the critical 1930s, and exposes some of the nonsense which results from the crude—and largely propagandistic—application of Marx- ist categories to a totally different Chinese development. J. M.