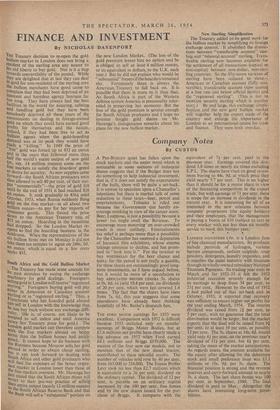 THE Treasury decision to re-open the gold bullion market in London does not bring a resident of the sterling area any nearer to his old liberty to buy gold. Nor is it a step towards convertibility of the pound. While they are delighted that at last they can deal In gold for non-residents of the sterling area the bullion merchants have good cause 'to complain that they had been deprived of an innocent and harmless agency business far too long. They have always had the best facilities in the world for assaying, refining and handling gold but they have been senselessly deprived all these years of the commissions on dealing in foreign-owned gold on which they could have earned good Profits for themselves and the nation. Indeed, if they had been free to act as bullion agents when the gold-hoarding demand was at its peak they would have p acle a "killing." In 1949 the price of 'free" gold was forced up to 1353 an ounce and in the years that followed more than half the world's entire output of new gold (or, say, 14 million ounces came on the free markets to satisfy the &warders' greed or desire for security. As new supplies came forward—the South African producers were then allowed to sell 40 per cent. of their out- Put "conunercially"—the price of gold fell until by the end of 1951 it had reached $38 an Ounce. It sank gradually to $36} until October, 1953, when Russia suddenly flung gold on the free market—in all about two Indlion ounces—to pay for her imports of consumer goods. This forced the price down to the American Treasury rate of ,435 an ounce. Hoarding in the meantime had dropped. So the London Market re- opens to find the hoarding business in the doldrums. When the representatives of the six bullion firms met on Monday it did not take them ten minutes to agree on 248s. 6d. an ounce, which is equal to a few cents under $35, South Africa and the Gold Bullion Market The Treasury has made some amends for its past mistakes by easing the exchange Machinery for gold dealings. Foreigners selling gold in London will receive" registered sterling." Foreigners buying gold will pay either in American or Canadian account erling or in "registered sterling." Thus, a renchman who has hoarded gold abroad n sell in London with the knowledge that can buy back without any exchange diffi- UltY: (He is, of course, not likely to be Toted to sell unless and until America Ises her Treasury price for gold.) The Ondon gold market can therefore compete ith the free markets abroad on better rnis than the bullion houses had andel- ated. It cannot hope to do business with e Russians because Moscow sells her gold broad in order to obtain cheap sterling, ut it can look forward to dealing with oath Africa and other gold producers who . the new London Market. (The loss of the gold premium leaves him no option and he is obliged to sell at least 4 million ounces, or its equivalent in dollars, to the U.K. each year.) But he did not explain who would be " substantial" buyers if the hoarders remained shy. Fortunately there is always the American .Treasury to fall back on. It is possible that there is more to it than that. As South Africa is part of the Western defence system America is presumably inter- ested in preserving her economy. But the loss of the gold premium is serious enough for South African producers and 1 hope no investor bought gold' shares on Mr. Havenga's disingenuous remarks about his plans for the new bullion market. New Sterling Simplification The Treasury added to its good work for the bullion market by simplifying its foreign exchange control. It abolished the distinc- tions between "transferable account" ster- ling and " bilateral account" sterling. Trans- ferable sterling now becomes available for the settlement of all transactions (capital or non-capital) between non-dollar, non-ster7 ling countries. So the fifty-seven varieties of sterling have been reduced to three-7 American or Canadian account (fully con- vertible), transferable account (now quoted at a free rate just below official parity) and the "registered sterling". (This is not to mention security sterling which is another story.) By and large, this exchange simpli- fication and the new gold bullion market will together help the export trade of the country and enlarge the importance or London as an international centre for trade and finance. They were both overdue.