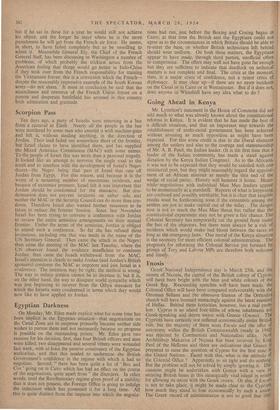 On Monday, Mr. Eden made explicit what for some time

has been implicit in the Egyptian situation—that negotiations on the Canal Zone are in suspense primarily 'because neither side wishes to pursue them and not necessarily because no progress is possible on the outstanding points. Mr. Eden gave two reasons for his decision, first, that four British officers .and men were killed, two disappeared and several others were wounded last week, with at least the passive connivance of the Egyptian authorities, and that this tended to undermine the British Government's confidence in the regime with which it had to negotiate. Second. " there has been quite a lot of ` Box and Cox' going on in Cairo which has had an effect on the course of the negotiations, quite apart from " the disorders. In other words, until the Revolutionary regime gives proof of a stability that it does not possess, the Foreign Office is going to indulge the indecision which has possessed it for a long time. All this is quite distinct from the impasse into which the negotia- tions had run, just before the Boxing and Coxing began in Cairo; at that time the British and the Egyptians could not agree as to the circumstances in which Britain should be able to re-enter the base, or whether British technicians left behind should wear uniform. On both these matters, the Egyptians appear to have made, through third parties, unofficial offers to compromise. The offers may well not have gone far enough but they are sufficient to indicate that deadlock on technical matters is not complete and final. The crisis at the moment, then, is a major crisis of confidence, not a minor crisis of diplomacy. It may clear up—if there are no more incidents on the Canal or in. Cairo or in Westminster. But if it does not, does anyone in Whitehall have any idea what to do ?