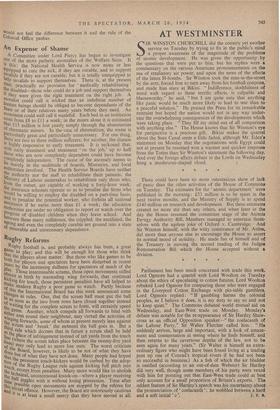 SIR WINSTON CHURCHILL did the country yet another service on Tuesday by trying to fix in the public's mind a proper awareness of the magnitude of the problems of atomic development. He was given the opportunity by the questions that were put to him, but his replies were a commentary on the various American pronouncements on the use of retaliatory air power, and upon the news of the effects of the latest H-bombs. Sir Winston took the man-in-the-street by the arm, forced him to turn away from-his football coupons, and made him stare at Bikini. " Indifference, slothfulness of mind with regard to these terrific effects, is culpable and blameworthy," he said, " but I am quite sure that anything like panic would be much more likely to lead to war than to a peaceful solution." He praised the Press for its remarkable restraint but hoped the nation would not in any way under- rate the overwhelming consequences of the developments which were taking place. " They fill my mind out of all comparison with anything else." The House knows that Sir Winston's eye for perspective is a precious gift. Bikini makes the quarrel about the Suez Canal seem a little faded, although Mr. Eden's statement on Monday that the negotiations with Egypt could not at present be resumed won a warmer and quicker response from the Tories than Sir Winston's statement the following day. And over the foreign affairs debate in the Lords on Wednesday hung a mushroom-shaped cloud. 4 * * * There could have been no more ostentatious show of lack of panic than the other activities of the House of CommOns on Tuesday. The estimates for the atomic department' were published in the morning : £53 million is to be spent in the next twelve months, and the Ministry of Supply is to spend £140 million on research and development. But these estimates created no more stir than any others, and when later in the day the House resumed the committee stage of the Atomio En'rgy Authority Bill, Members managed to entertain them- selves with the ageless joke' of Oxford v. Cambridge. And Sir Winston himself, with the witty connivance of Mr. Attlee, did more than anyone else to encourage the House to assert its normal mood of stolidity. He made fun of himself and of the Treasury in moving the second reading of the Judges Remuneration Bill which the House accepted without a division.

Parliament has been much concerned with trade this week. Lord Ogmore had a quarrel with Lord Woolton on Tuesday • about the ethics of speculating in cotton futures. Lord Woolton rebuked Lord Ogmore for comparing those who were engaged in the Liverpool Cotton Exchange with pin-table gamblers. Lord Ogmore replied: " If gambling harms the colonial peoples, as I believe it does, it is my duty to say so and not to keep quiet." The Commons debated world mutual aid on Wednesday, and East-West trade on Monday. Monday's debate was notable for the re-appearance of Sir Hartley Shaw- cross as an official Opposition speaker—" the coelacanth of the Labour Party," Sir Walter Fletcher called him. "Ho suddenly arrives, large and important, with a look of amaze- ment and consternation at seeing where he finds himself. and then returns to the cavernous depths of the law, not to be seen again for many years." (Sir Walter is himself an extra- ordinary figure who might have been found living at a trading post up one of Conrad's tropical rivers if he had not been so successful in business.) As a fish of which the air bladder is ossified (according to an out-of-date Webster) Sir Hartley did very well, though some members of his party, were vexed with him for pointing out that East-West trade could at best only account for a small proportion of Britain's exports. The oddest feature of Sir Hartley's speech was his uncertainty about the pronunciation of coelacanth ': he wobbled between a hard