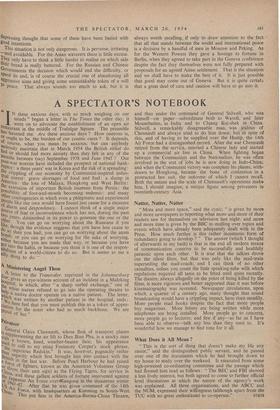 " N these anxious days, with so much weighing on our minds " began a letter in The Times the other day; it went on to advocate the establishment of an open air has haunted in the middle of Trafalgar Square. The preamble 'tas haunted me. Are these anxious days ? How onerous is, or ought to be, the burden of our cosmic cares ? It depends, °f course, what you mean by anxious; but can anybody tleriously maintain that in March 1954 the British either do '40 or should feel more anxiety than they felt in any of the .„111„"ths between (say) September 1938 and June 1945 ? Our "R.-war worries have included the prospect of national bank- ruPtcY : a three years' war in Korea and the risk of it spreading: the crippling of our economy by Communist-inspired indus- Val unrest: grave shortages of food and fuel: a slump in the : the loSs of Malaya, Hongkong and West Berlin : "le extrusion of important British interests from Persia : the Possibility of foot-and-mouth becoming endemic: and mapy other contingencies in which even a phlegmatic and experienced 13„e°Ple like our own would have found just cause for a measure of alarm and despondency. I cannot think of a single major tource of fear or inconvenience which has not, during the past own.° Years, diminished in its power to generate the one or the Erler. You can go on worrying about the Russians if you `cre, though the evidence suggests that you have less' cause to h° so than you had; you can go on worrying about the atom ilth; or you can go on worrying for the sake of worrying, either because you are made that way, or because you have got into the habit, or because you think it is one of the respon- sibilities 'titles of a world-citizen to do so. But it seems to me a tialY thing to do.—