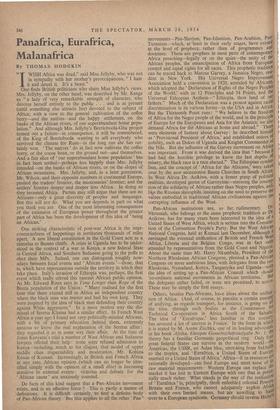 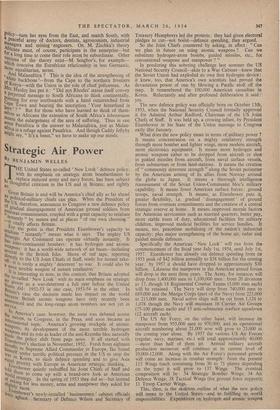 " WISH Africa was dead," said Miss Jellyby, who was not in sympathy with her mother's preoccupations, " I hate it and detest it. It's a beast."

One finds British politicians who share Miss Jellyby's views. Mrs. Jellyby, on the other hand, was described by Mr. Kenge as " a lady of very remarkable strength of character, who devotes herself entirely to the public . . . and is at present (until something else attracts her) devoted to the subject of Africa; with a view to the general cultivation of the coffee berry—and the natives—and the happy settlement, on the banks of the African rivers, of our superabundant hOme popu- lation." And although Mrs. Jellyby's Borrioboola-Gha project turned out a failure—in consequence, it will be remembered, of the King of Borrioboola wanting to sell everybody who survived the climate for Rum—in the long run she has cer- tainly won. ' The natives' do in fact now cultivate the coffee berry, or the cocoa bean, or the ground nut—and themselves. And a fair slice of ' our superabundant home population ' has in fact been settled-7-perhaps less happily than Mrs. Jellyby intended—on the banks of African rivers, or on the slopes of African mountains. Mrs. Jellyby, and, in a later generation, Mr. Wilcox, and their opposite numbers in continental Europe, pushed the traders' frontier, the missionaries' frontier, and the settlers' frontier deeper and deeper into Africa. In doing so they invented Africa. Purists may still argue that there are no Africans—only a great diversity of peoples and languages. But this will not do. What you are depends in part on what you think you are. One of the most interesting consequences of the extension of European power throughout the greater part of Africa has been the development of this idea of ' being an African.'

One striking characteristic of post-war Africa is the inter- connectedness of happenings in territories thousands of miles apart. A new liberal constitution in the Gold Coast acts as a stimulus to Basuto chiefs. A crisis in Uganda has to be under- stood in the context of a war in Kenya, a new federal State in Central Africa, and Southern Sudanese going to the polls to elect their MPs. Indeed, one can distinguish, roughly now- adays between local events and ' African events '—those, that is, which have repercussions outside the territory in which they take place. Italy's invasion of Ethiopia was, perhaps, the first event which really stirred this nascent African public opinion. As Mr. Edward Roux says in Time Longer than Rope of the Bantu population of the Union: " Many realised for the first time that there existed still in Africa an independent country where the black man was master and had his own king. They were inspired by the idea of black men defending their country against White aggressors." In a more modest way the dis- missal of Seretse Khama had a similar effect. In French West Africa a year ago I found not very politically-minded Africans, with a bit of primary education behind them, extremely anxious to know the real explanation of the Seretse affair : they regarded it as in some way their affair. At the time of Jomo Kenyatta's trial a number of West African and Sudanese lawyers offered their help: some were refused admission to Kenya—including, much to his disgust, that model of upper middle class respectability and moderation, Mr. Kobina movements—Pan-Slavism. Pan-Islamism, Pan-Arabism, Pan' Turanism—which, at least in their early stages, have existed at the level of prOphecy, rather than of programmes and doctrines. There are prophets in most parts of contemporarY Africa preaching—legally or on the quiet—the unity of the African peoples, the emancipation of Africa from European control and equal rights for all races. This prophetic tradition can be traced back to. Marcus Garvey, a Jamaica Negro, resi' dent in New York. His Universal Negro Improvement Association held a convention in 1920, attended by Africans, which adopted the Declaration of Rights of the Negro Peoples of the World,' with its 12 Principles and -54 Points, and the Universal Ethiopian Anthem—" Ethiopia, thou land of out fathers." Much of the Declaration was a protest against racial discrimination in its various forms—in the USA and in Africa. But the Thirteenth Point runs: " We believe in the freedom of Africa for the Negro people of the world, and in the principle of Europe for the Europeans and Asia for the Asiatics; we also demand Africa for the Africans at home and abroad." There were elements of fantasy about Garvey : he described himself as Provisional President of Africa,' and established orders 01, nobility, such as Dukes of Uganda and Knights Commander of the Nile. But the influence of the Garvey movement on Africa was important. From it was derived the idea that " because tt had had the horrible privilege to know the last depths of misery, the black race is a race elected." The Ethiopian symbo• lism, and the concept of Africa for the Africans,' were taken over by the new secessionist Bantu Churches in South Africa, In West Africa Dr. Azikiwe, with a firmer grasp of political realities, developed germs of Garveyism—stressing the concep' tion of the solidarity of African rather than Negro peoples, and like the Russian slavophils, insisting on the need to preserve the values embodied in traditional African civilisations against the corrupting influence of the West.

Pan-African institutions are, so far, rudimentary. Dr. Nkrumah, who belongs to the same prophetic tradition as Pr' Azikiwe, has for many years been interested in the idea of 3 United States of West Africa, which is written into the Constiur tion of the Convention People's Party. But the West Africa National Congress, held at Kumasi last December, although it envisaged the eventual unification of British and French West Africa, Liberia and the Belgian Congo, was in fact onlY attended by representatives from the Gold Coast and Nigeria. About the same time Mr. Harry Nkumbula, President of tile Northern Rhodesian African Congress, planned a Pan-African Congress on more ambitious lines, with delegates from the t"';" Rhodesias, Nyasaland, Kenya, Tanganyika and Uganda—wit°, the idea of setting up a Pan-African Council which should 'co-ordinate national movements in African territories.' But the delegates either failed, or were not permitted, to arriN'e. These may be simply the first essays. policy—tum her eyes from the East, and march South, with a Peaceful army of doctors, dentists, agronomists, industrial managers and mining 'engineers. On M. Zischka's theory r°r"eans must, of course, participate in the enterprise—but a long time to come their role mus be subordinate. Other versions of the theory exist—M. Senghor's, for example-- Which conceive the Eurafrican relationship in less Germanic, more equalitarian, terms. hAnd Malanafrica ? This is the idea of the strengthening of 0rIbIte backbone '—from the Cape to the northern frontiers Kenya—with the Union in the role of chief policeman. As Huxley has put it: " Did not Rhodes' statue itself convey a perpetual message to South Africans to think continentally, P,IntIng for ever northwards with a hand outstretched from he'rPe, ?Town and bearing the inscription ' Your hinterland i But for those who have learned to think of them- sel:es as Africans the extension of South Africa's lebensraum means the enlargement of the area of suffering. Thus in one afe Panafrica is the answer to Malanafrica, just as Malan- _ea is a refuge against Panafrica. And though Caddy Jellyby 'fight say, " It's a beast," we have to make up our minds.