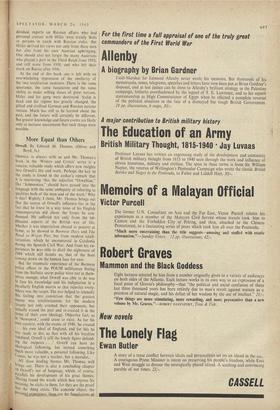 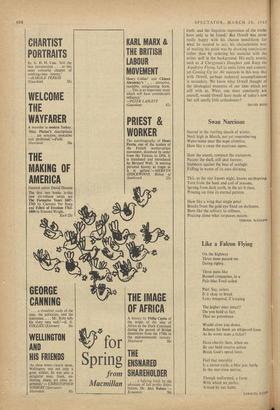 More Equal than Others

ORWELL is always with us and Mr. Thomas's book in the 'Writers and Critics' series is a concise, valuable study which offers new insights into Orwell's life and work. Perhaps the key to the study, is found in the author's remark that it is interesting 'that the adjective "Orwellian," like "Johnsonian," should have passed into the language with the same ambiguity of referring to qualities both of the man and of the work.' Why is this? Rightly, I think, Mr. Thomas brings out that the source of Orwell's influence lies in the fact that he knew in a way none of his English Contemporaries did about the forces he con- demned. He suffered not only from the un- Pleasant aspects of the British way of life, Whether it was imperialism abroad or poverty at home, as he showed in Burmese Days and The Road to Wigan Pier, but from modern totali- tarianism, which he encountered in Catalonia during the Spanish Civil War. And from his ex- periences he was able to distil the nightmare of 1984 which still haunts us, that of the boot coming down on the human face for ever.

But the traumatic experience of the Burmese Police officer or the POUM militiaman fleeing I rom the Stalinist secret police were not in them- selves enough; what Orwell was able to do was to fuse his knowledge and his indignation in a Peculiarly English matrix so that injustice every- where was the target. The war helped to intensify this feeling into conviction that the' greatest enemy was totalitarianism; for the modern tyrants not only crushed their opponents, but actually erased the past and re-created it in the terms of their own ideology. Objective fact, as In 'Newspeak,' could cease to exist. As for his awn country, with the events of 1940, 'he created • • . his own ideal of England, and for this he was ready to die; so that with all his loyalties redefined, Orwell is still the lonely figure defend- ing the outposts . . .' Orwell can have no Ideological following, but instead something nitwit more valuable, a personal following. Like Camus, he was not a teacher, but a moralist. All these leading themes Mr. Thomas well brings out. There is also a concluding chapter "n Orwell's use of language, which, of course, parallels his development of his great themes. Having found the words which best express his Meaning, he sticks to them, for they are the proof that the thing exists. The concrete object, the Personal experience, them„,are the fougdations of truth, and the linguistic expression of the truths have only to be found.' But Orwell was never really happy with his chosen novel-form for what he wanted to say; his characteristic way of making his point was by drawing conclusions rather than by ordering his material with the writer well in the background. His early novels, such as A Clergyman's Daughter and Keep the Aspidistra Flying, fail to unite form and content; yet Coining Up for Air succeeds in this way. But with Orwell, perhaps technical accomplishment is secondary. We know what Orwell thought of the ideological monsters of our time which are still with us. What, one must constantly ask oneself, would Orwell have made of today's new but still smelly little orthodoxies?