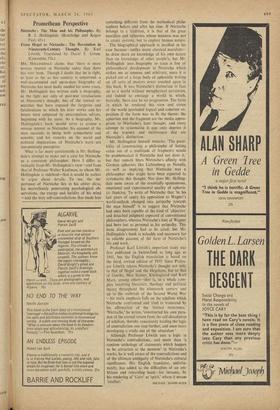 From Hegel to Nietzsche: The Revolution in Nineteenth-Century Thought. By Karl Lowith. • Translated by David E. Green. (Constable, 55s.)

MR. HOLLINGDALE claims that 'there is more serious interest in Nietzsche today than there has ever been. Though I doubt that he is right, at least as far as this country is concerned, a well-documented and up-to-date biography of Nietzsche has been badly needed for some years. Mr. Hollingdale has written such a biography, in the light not only of post-war revaluations of Nietzsche's thought, but of the textual re searches that have exposed the forgeries and falsifications to which his later works and his letters were subjected by unscrupulous editors, beginning with his sister. As a biography, Mr. Hollingdale's book should serve to arouse a serious interest in Nietzsche; his account of the man succeeds in being both sympathetic and sensible, and his remarks on the social and political implications of Nietzsche's work are uncommonly perceptive.

What is far more questionable is Mr. Holling- dale's attempt to make out a case for Nietzsche as a consistent philosopher. Here I differ so radically from Mr. Hollingdale's view—and from that of Professor Walter Kaufman, to whom Mr. Hollingdale is indebted—that it would be useless to argue about details. To me, the im- portance of Nietzsche lies in his ()biter dicta, his marvellously penetrating psychological ob- servations, the energy and lucidity of his mind —and the very self-contradictions that made him something different from the methodical philo- sophers before and after his time. If Nietzsche belongs to a tradition, it is that of the great moralists and aphorists whose business was not to create systems, but to explore human nature.

The biographical approach is justified in his case because—unlike many classical moralists— he drew more on knowledge of his own nature than on knowledge of other people's; but Mr. Hollingdale uses biography to trace a line of philosophical development in Nietzsche which strikes me as tenuous and arbitrary, since it is picked out of a large body of aphoristic writing on all sorts of matters never touched upon in this book. It was Nietzsche's distinction to face up to a world without metaphysical certainties, and indeed to envisage a world in which, basically, there can be no progression. The form in which he rendered this view and vision of the world precluded logical and coherent ex- position if the form was to fit the theme; the aphorism and the fragment are the media appro- priate to Nietzsche's later thought, and every attempt to systematise it can only deprive it of the urgency and incisiveness that are Nietzsche's distinction.

Mr. Hollingdale himself remarks, 'The possi- bility of 'constructing a philosophy of lasting value out of a multitude of fragments would be problematical if Nietzsche had not done it,' but that remark blurs Nietzsche's affinity with German aphorists like Lichtenberg or Novalis, as well as implying that Nietzsche was a philosopher who might have been expected to systematise this thought. Nor does Mr. Holling- dale seem aware of the essentially spontaneous, emotional and experimental quality of aphoris- tic thinking. To write of Nietzsche that 'in his last years of sanity his opposition to Wagner's world-outlook changed into antipathy towards the man himself' is to suggest that Nietzsche had once been capable of the kind of 'objective' and detached judgment expected of conventional philosophers, whereas Nietzsche's love of Wagner had been just as personal as his antipathy. This basic disagreement had to be aired; but Mr. Hollingdale's book is valuable and necessary for its reliable account, of the facts of Nietzsche's life and work.

Professor Karl Liiwith's important study was first published in Switzerland as long ago as 1941, but the English translation is based on the third, revised edition of 1953. Since Profes- sor Lowith relates Nietzsche's thought not only to that of Hegel and the Hegelians, but to that of Goethe, Max Stirner, Kierkegaard and Karl Marx, among others—that is, to a whole com- plex involving literature, theology and political theory throughout the nineteenth century and up to the outbreak of the Second World War —his main emphasis falls on the nihilism which Nietzsche confronted and tried to transcend by his affirmation of the `eternal recurrence.' 'Nietzsche,' he writes, 'constructed his own para- dox of the eternal return from the self-dissolution of nihilism, thereby consciously leading the logic of contradiction one step further, and once more developing a credo out of the absurdum.'

Although Professor Ltiwith sees a logic in Nietzsche's contradictions, and more than 'a random anthology of statements which happen to be attractive at the moment' in Nietzsche's works, he is well aware of the contradictions and of the ultimate ambiguity of NietzSche's cultural significance. His English translator, unfortu- nately, has added to the difficulties of an am- bitious and rewarding book—for instance, by his rendering of 'Geist' as 'spirit,' where it means