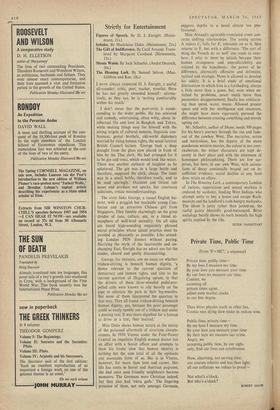 I HAVE always respected D. J. Enright, a useful all-rounder; critic, poet, teacher, novelist. Here he has not greatly extended himself : alterna- tively, as they say, he is 'writing comfortably within his reach.'.

I don't mean that the poet-critic is conde- scending to the wider public. He has achieved real comedy, entertaining, often witty, about in- tellectual life and love in Bangkok and Tokyo, while making things easy for himself with the sitting targets of cultural nannies, Linguistic con- ferences, genial brothels, old-world diplomats worried by rising human rights, the usual farcical British Council lecture. 'George took a deep draught from the glass now placed in front of him by the Thai clerk. He had arranged for it to be gin and tonic, which would look like water. There was another outburst of laughter as he spluttered. The gin was in a large bottle and therefore, supposed the clerk, cheap. The tonic was in a small bottle, therefore costly, and to be used sparingly.' Occident and Orient rub noses and produce not sparks, but courteous solecisms, ornate misunderstandings.

The story links George, a casual English lec- turer, with a priggish but teachable young Con- fucian and an attractive Chinese girl from Singapore. They fumble charmingly on the great divides of race, culture, sex, in a tinted at- mosphere of well-bred unreality. On all sides are heard high-sounding exquisitely phrased moral principles whose actual practice must be avoided as pleasantly as possible. Like ,attend- ing London PEN dinners without paying. Harrying the myth of the inscrutable and un- changing East, Enright has an adroit eye for the tender, absurd and gently disconcerting.

George, for instance, sets an essay on whether trishaw-driving is beneath human dignity, 'a theme relevant to the current question of democracy and human rights, and also to the current question of illegalising opium, in that the drivers of these three-wheeled pedal-pro- pelled cabs were known to rely heavily on the pipe to alleviate the pain in their leg-muscles. But none of them interpreted the question in that way. They all found trishaw-driving beneath human dignity, yes, because the poor passenger could so easily tumble out of a trishaw and under a passing taxi. It was more dignified for a human to drive in a taxi, they insisted.'

Miss Duke shows human nature at the mercy of the poisoned aftermath of atrocious circum- stances. In 1954 Vienna under the Four-Power Control an impulsive English woman doctor has an affair with a Soviet officer and attempts to thaw his trashy view that human identity is nothing but the sum total of all the .opinions our associates form of us. She is in Vienna, however, for more than love and career. Her life has roots in Soviet and Austrian pogroms, she had once seen friendly neighbours become monsters. The Germans were Christian indeed, but they also had 'extra gods.' The lingering presence of these, not only amongst Germans, suggests depths to a novel almost too pro- fessional.

Miss Arnaud's agreeably-translated conte con- cerns shifting relationships. The young actress A rejects C, falls for F, rebounds on to S, then returns to F, but with a difference. 'The sort of thing the French do so well' one tends to over- hear. I refer to them by initials because their human strangeness and unpredictability arc vitiated by the hypothesis: the power of in- difference, alternately offensive and defensive, tactical and strategic. None is allowed to develop his oddity. It is a brief study of emotional dilettantism in which love is a foreboding, always a little more than a game, but, even when en- riched by problems, never much more than passionless disappointment, finally less exhilarat- ing than speed, water, music. Allowed greater space and with her intelligence and resources, she might have more vigorously pursued the difference between creating something and merely opting out.

Mr. Schaefer, author of Shane, needs 500 pages for his hero's journey through the rise and fade- out of the cowboy West. The narrative, active and meticulous, has the dignity of the more ponderous western movies, the colour is not over- exuberant, the minor characters are kept de- cently in their place and with the minimum of homespun philosophising. There are few sur- prises, but here, in our own West, with accusa- tions of decay continually brayed out on in- sufficient evidence, social decline at any level does retain an allure.

In The Housing Lark, a contemporary London of rackets, superstition and sexual markets is endured by sardonic, feuding West Indians who attempt unity to buy a house and escape Rach- manism and the landlord's cosh-hungry mohawks. The idiom is jazzy rather than jazzed-up, the rueful gaiety blessedly good-humoured. Bitter sociology barely shows its teeth beneath the high spirits implied by the title.