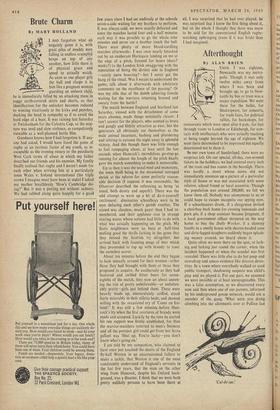 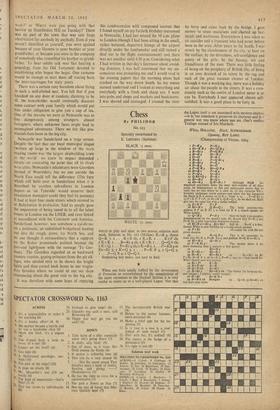 UNTIL I was eighteen, Newcastle was my metro-

restaurants which were open after 6 p.m., for fast through trains to London or Edinburgh, for con- tacts with intellectuals who were actually teaching or being taught beyond the age of eighteen. We went there determined to be impressed but equally determined not to show it.

In our own town of Sunderland, there were no surprises left. On our special, all-day, run-around tickets in the holidays, we had covered every inch of the tram and bus routes in the borough. There was hardly a street whose name did not immediately summon up a picture of a particular style of house or was not associated with some relative, school friend or local eccentric. Though the population was around 200,000, we felt we knew them all. Nobody was anonymous to us or could hope to escape incognito our spying eyes. If a schoolmaster drank, if a clergyman invited a choirboy back home for evening lemonade and pork pie, if a shop assistant became pregnant, if a local government officer detoured on the way home to buy the Daily Worker, if a slummy family in a smelly house with shaven-headed sons and dirty-legged daughters suddenly began splash- ing money around, we heard about it.

Quite often we were there on the spot, or lurk- ing and larking just round the corner, when the incident happened or when the scandal was first revealed. There was little else to do but peep and eavesdrop and amass evidence like divorce detec- tives. In a town where everybody walked or used public transport, shadowing suspects was child's play and we played it. For our part, we assumed we were invisible or at least unrecognisable. This was a false assumption, as we discovered every now and then when one of our parents, informed by his underground gossip network, would ask a member of the gang, 'What were you doing climbing into the allotments over at Pallion last 'Cul-de-sac.' week?' or 'Where were you going with that barrow up Humbledon Hill on Tuesday?' There was .no part of the town that was safe from observation for anybody by anybody. Even if you weren't identified as yourself, you were spotted because of your likeness to your brother or your grandfather, or because you were in the company of somebody who resembled his brother or grand- father. To hear adults talk was like hearing a genealogy from the Old Testament devoted to establishing who began the begat. One surname would be enough to start them off tracing back the inter-marriages for sixty years.

There was a certain cosy boredom about living in such a well-plaited nest. You felt that if you knocked on any door at random, claiming to be ill, the householder would eventually discover some contact with your family which would put him under obligation to give you a cup of tea. One of the reasons we went to Newcastle was to live dangerously among strangers, almost foreigners. where unknown faces might lead to unimagined adventures. There we felt like pro- vincials foot-loose in the big city.

Newcastle was Sunderland on a large screen. Despite the fact that our local municipal slogan (written up large in the window of the main reading room) was 'the largest shipbuilding town in the • world we knew its impact depended . simply on concealing the point that all its rivals were clue. Newcastle's inhabitants were Geordies instead of Wearsiders, but no one outside the North East could tell the difference. (The fury Which still boils over in Sunderland when it is described by careless sub-editors in London Papers as 'on Tyneside' would unnerve their circulation managers could they feel its passion.) It had at least four main streets which seemed to Us Babylonian in profusion. And its people gave the impression of being tuned in to all the latest events in London via the LNER, and even linked at secondhand with the Continent and America. Sunderland, however, was somehow a cul-de-sac on a peninsula, an unfinished bridgehead leading out into the rough, green, icy North Sea, and no one thought it extraordinary that a signpost on the Raker promenade pointed beyond the Pier-end lighthouse with the message To Ger- lilany.' The Geordies regarded us as backward country cousins, gaping primates from the pit vil- lages, who needed only to be shown the bright lights and then carted back home to our troglo- dyte firesides where we could sit out our days reminiscing about the great visit to the big city.

It was therefore with some hope of repaying

this condescension with compound interest that I found myself on my fortieth birthday marooned in Newcastle. I had just missed the 10 a.m. plane to London (though I had been sitting in the small, rather battered, departure lounge of the airport directly under the loudspeaker and still turned a deaf ear to the flight announcement) and there was not another until 4.30 p.m. Considering what I had written in that day's Spectator about avoid- ing disasters, I was half convinced that my un- conscious was protecting me and I would read in the evening papers that the morning plane had crashed on the way down South. So my senses seemed tenderised and I looked at everything and everybody with a fresh and sharp eye. I went into pubs and shops and markets and bookstores. I was shaved and massaged. I crossed the river by ferry and came back by the bridge. I save money to street musicians and chatted up bar- maids and waitresses. Everywhere 1 was taken as an outsider and a transient who had never before been in the area. After years in the South, I-was struck by the classlessness of the city, at least on the surface; by the directness, self-confidence and gaiety of the girls; by the fluency, wit and friendliness of the men. There was little feeling of being on the periphery of British life, of being in an area drained of its talent by the tug and suck of the great vacuum cleaner of London. Though it was a working day, there was a holiday air about the people in the streets. It was a com- munity such as the centre of London never is or can be. Everybody I met appeared almost self- satisfied. It was a good place to be forty in.