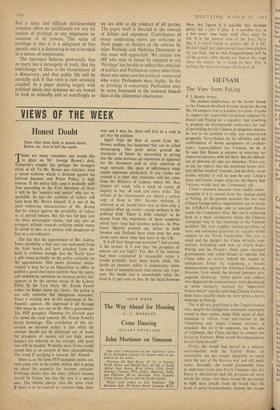 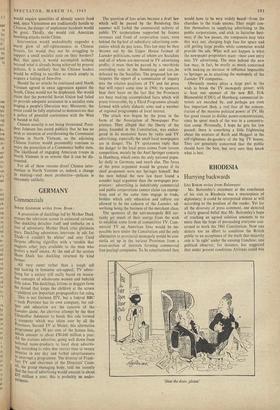 The View from Peking P. J. HONEY writes: The present helplessness ot the Soviet Union in the Vietnam deadlock became apparent during Mr. Gromyko's visit to London last week. Unable to support the impossible conditions imposed by Hanoi and Peking for a ceasefire. and unwilling to propose an international conference for tear of provoking hostile Chinese propaganda attacks, he was in no position to offer any constructive proposals. Nevertheless, by his affability and his confirmation of Soviet acceptance of co-chair-- man's responsibilities for Vietnam, he let it be seen that Russia is anxious to maintain her improved relations with the West. But the difficul- ties of pleasing all sides are immense. There are, as yet, no reports that the promised Soviet mili- tary aid has reached Vietnam, and the delay raises doubts whether it will be now be sent. China's latest anti-Soviet tirades disprove the theory that Vietnam would heal the Communist rift.

China's situation becomes most readily under- standable if it is viewed from the vantage point of Peking. At the present moment, the two vital Chinese foreign policy requirements are to wreck the USSR-US detente and to discredit Russia inside the Communist bloc. But she'-is achieving both in a most satisfactory (from the Chinese viewpoint) way by her treatment ot the Vietnam problem. She now supplies limited quantities of arms and unlimited quantities of raucous verbal support to the 'North Vietnamese. The cost is small and the dangers for China virtually non- existent. Following each new air attack Radio Peking and the People's Daily issue outraged protestations and veiled threats of reprisal, but China takes no action. Indeed she reaped an unexpected bonus by organising a protest demonstration against the Anierican Embassy in Moscow, from which she derived immense pro- paganda advantage. Soviet police and soldiers who dispersed the demonstrators were denounced in terms formerly reserved for 'imperialist Fascist beasts' and the returning Chinese students, their faces suitably made up, were given a hero's welcome in Peking.

This is all very gratifying to the Chinese leaders who, despite the belligerent statements constantly issued in their names, make little secret of their intention to refrain from intervention in the Vietnamese war unless -Chinese territory is attacked. But let it be supposed, for the sake of argument, that China decided to commit her forces in Vietnam. What would the consequences be for China herself?

Firstly, she would find herself in a military confrontatibn with the United States, an eventuality she has sought diligently to avoid since the end of the Korean war and still seeks today. Secondly, she would presumably have to send land forces into North Vietnam—her Air Force is obsolescent and she possesses no navy worth the name—but there would be no enemy to fight since attacks from the South take the form of aerial bombardment. Indeed, her troops

would require quantities of already scarce food and, since Vietnamese are traditionally hostile to Chinese, the danger of unpleasant incidents would be great. Thirdly, she would risk American bombing attacks inside China.

Intervention would undoubtedly engender a warm glow of self-righteousness in Chinese breasts, for would they not be struggling to support a small socialist state on their borders?

But, that apart, it would accomplish nothing beyond what is already being achieved by present

policies. It is unlikely that the Chinese leaders Would be willing to sacrifice so much simply to acquire a feeling of Mien-etre.

Should the air attacks be continued until North Vietnam agreed to cease aggression against the South, China would not be displeased. She would claim that the powerful Soviet Union had failed to provide adequate assistance to a socialist state Waging a people's liberation war. Moreover, the event could be fully exploited to demonstrate that a policy of peaceful coexistence with the West is bound to fail.

Chinese security is not being threatened. Presi- dent Johnson has stated publicly that he has no

Wish or intention of overthrowing the Communist regime in North Vietnam, so the adjoining Chinese frontier would presumably continue to enjoy the protection of a Communist buffer state. The likelihood of engaging American troops in North Vietnam is so remote that it can be dis- counted.

For all of these reasons direct Chinese inter- vention in North Vietnam or, indeed, a change in existing—and most productive—policies is extremely unlikely.