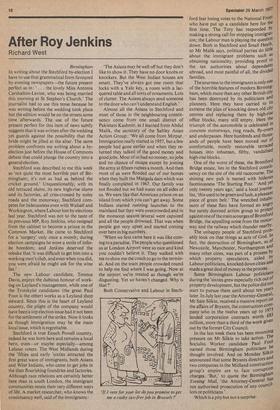 perfect as in : . the lovely Miss Antonia Carshalton-Levine, who was being married this morning at St Stephen's Church.' The journalist had to use this tense because he was writing before the wedding took place but the edition would be on the streets some time afterwards. The use of the future present perfect for this item of news subtly suggests that it was written after the wedding yet guards against the possibility that the bride might be jilted at the altar. The same problem confronts me writing about a byelection just before the House of Commons debate that could plunge the country into a general election.

• Stechford was described to me this week as 'not quite the most horrible part of Birmingham; it's not as bad as behind the cricket ground.' Unquestionably, with its old terraced slums, its new high-rise slums • and its factories, all criss-crossed by noisy roads and the motorway, Stechford competes for hideousness even with Walsall and Workington, where Labour lost by-elections last year. Stechford was not to the taste of its previous MP, Roy Jenkins, who resigned from the cabinet to become a prince in the Common Market. He came to Stechford for a 'surgery' only once a month; during election campaigns he wore a smile of infinite boredom; and Jenkins deserved the rebuke that 'it was difficult to get him into a working men's club, and even when you did, you were afraid he might ask for the wine list.'

The new Labour candidate, Terence Davis, enjoys the dubious honour of working on Leyland's management, while one of the Trotskyist candidates (the great Paul ' Foot is the other) works as a Leyland shop steward. Since this is the heart of Leyland country, the plight of the company would have been a top election issue had it not been for the settlement of the strike. Now it looks as though immigration may be the main local issue, which is regrettable.

Stechford is true Enoch Powell country, indeed he was born here and remains a local hero, even—or maybe especially—among Labour voters. The West Midlands during the 'fifties and early 'sixties attracted the first great wave of immigrants, both Asians and West Indians, who came to get jobs in the then flourishing foundries and factories. Although race relations are certainly better here than in south London, the immigrant communities retain their very different ways of life. A market researcher, who knows the constituency well, said of the immigrants: 'The Asians may be well off but they don't like to show it. They have no door knobs or knockers. But the West Indian houses are smart. They've always got one room that locks with a Yale key, a room with a lacquered table and all sorts of ornaments. Lots of clutter. The Asians always send someone to the door who can't understand English.'

Almost all the Asians in Stechford and most of those in the neighbouring constituency come from one small district of Pakistani Kashmir, as I learned from Abdul Malik, the secretary of the Saltley Asian Action Group: 'We all come from Mirpur. Immigration really started in 1957, but a few people had gone earlier and when they returned they talked of the good money and good jobs. Most of us had no money, no jobs and no chance of escape except by joining the army at fifteen rupees a month. And then most of us were flooded out of our homes when they built the Mangala dam which was finally completed in 1967. Our family was not flooded but we had water on all sides of us. We were like that American prison on an island from which you can't get away. Some Indians started running launches to the mainland but they were overcrowded and in the monsoon season several were capsized and all the people drowned. That was when people got very upset and started coming over here in big numbers.

'When we first came here it was like coming to a paradise. The people who questioned us at London Airport were so nice and kind you couldn't believe it. They walked with me to show me the coach to go to the terminal. And on the train people crowded round to help me find where I was going. Now at the airport we're treated as though we're disgusting. Yet we haven't changed. Why is that?'

Both Conservative and Labour in Stech

ford fear losing votes to the National Front who have put up a candidate here for the first time. The Tory has responded bY making a strong call for stopping immigration ; the Labour man is playing the question down. Both in Stechford and Small Heath. so Mr Malik says, political parties do little about the immigrant problems such as obtaining nationality, providing proof to the tax authorities about dependants abroad, and most painful of all, the divided families.

The sourness to the immigrants is only one of the horrible features of modern Birmingham, which more than any other British citY has been destroyed by its politicians and planners. Here they have carried to 45 extreme the plan of knocking down old citY centres and replacing them by high-rise office blocks, many still empty. Here the triumph of the automobile is celebrated in concrete motorways, ring roads, fly-overs and underpasses. Here hundreds and thousands of people have been moved out of comfortable, mostly restorable terraced houses into inhuman, filthy, vandalised high-rise blocks. One of the worst of these, the Bromford Bridge estate, lies in the Stechford constituency on the site of the old racecourse. The shining new pub is named with hideous facetiousness 'The Starting Post.' And yet only twenty years ago,' said a local journalist, 'this used to be green and lush, a pleasant piece of green belt.' The wretched inhabitants of these flats have formed an angry but surely doomed action group to protest against one of the main scourges of Bromford Bridge, the appalling noise from the motorway and the railway which thunder nearbY.

The unhappy people of Stechford probably look on thse things as acts of God. In fact, the destruction of Birmingham, as of Newcastle, Manchester, Northampton and many other cities, was part of a process bY which property speculators, aided bY Labour politicians, knocked down cities and made a great deal of money in the process.

Some Birmingham Labour politicians during the 'sixties grew especially rich out of' property development, but the police did riot start to pursue them until about ten years later. In July last year the Attorney-General, Mr Sam Silkin, received a massive report on the affairs of Bryants, the construction company who in the twelve years up to 1973 landed corporation contracts worth £83 million, more than a third of the work given out by the former City Council. In the last week there has been mounting pressure on Mr Silkin to take action. The Socialist Worker candidate Paul Foot named those Birmingham politicians he thought involved. And on Monday Silkin announced that some Bryants directors and two companies in the Midland construction group's empire are to face corruption charges. 'But,' to quote the Birminghant Evening Mail, 'the Attorney-General has not authorised prosecution of any councillors or politicians.'

Which is a pity but not a surprise.