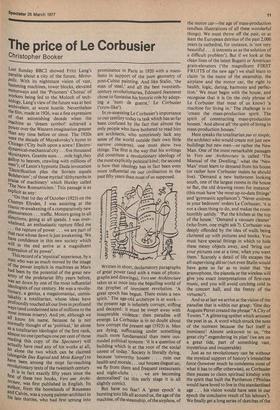 The price of Le Corbusier

Last Sunday BBC2 showed Fritz Lang's Parable about a city of the future, MetroMis. With its nightmare vision of vast, humming machines, tower blocks, elevated motorways and the 'Prisoners' Chorus' of workers being fed to the Moloch of technology, Lang's view of the future was at best ambivalent, at worst hostile. Nevertheless the film, made in 1926, was a fine expression of that astonishing decade when the machine as 'dream symbol' achieved a Power over the Western imagination greater than any time before or since. The 1920s were the decade of Mayakovsky's hymn to Chicago ('City built upon a screw! Electra: dynamical-mechanical city. ... five thousand skYscrapers, Granite suns. . . mile high they gallop to heaven, crawling with millions of men'); of Lenin's hypnotic Dada invocation Electrification plus the Soviets equals Bolshevism' ; of those myriad 'dithyrambs in Praise of machinery' which Huxley called The New Romanticism.' This passage is as explicit as any; "On that 1st day of October (1923) on the Champs Elysees, I was assisting at the titanic re-awakening of a comparatively new Phenomenon . . traffic. Motors going in all directions, going at all speeds. I was overwhelmed, an enthusiastic rapture filled me • • . the rapture of power. . . we are part of that race whose dawn is just awakening. We lave confidence in this new society which will in the end arrive at a magnificent expression of its power'. This record of a 'mystical' experience, by a Than who was as much moved by the image of the power implicit in machines as Marx had been by the potential of the great new army of the proletariat fifty years before, Was set down by one of the most influential Ideologists of our century. He was a revolutl°narY, a genius, a megalomaniac, unmistakablY a totalitarian, whose ideas have Profoundly touched all our lives in profound waYs (and condemned tens of millions to the Most intense misery). And yet, although we all know his name, because he is not normally thought of as 'political,' let alone as a totalitarian ideologist of the first rank, almost no one (perhaps one per cent of those reading this copy of the Spectator) will actually have read any of his works at all, let alone the two which can be claimed (,alongside Das Kapital and Mein Kampf) to nave been among the mqst far-reaching revolutionary texts of the twentieth century. It is in fact exactly fifty years since the first of these two books, Vers une Architecture, was first published in English. Its author, from the homelands of Rousseau an. d Calvin, was a young painter-architect in hIS late thirties, who had first sprung into prominence in Paris in 1920 with a manifesto in support of the pure geometry of post-Cubist painting. And like Stalin, 'the man of steel,' and all the best twentiethcentury revolutionaries, Edouard Jeanneret chose to fantasise his historic role by adopting a 'nom • de guerre,' Le Corbusier ('crow-like').

In re-assessing Le Corbusier's importance to our centtry today (a task which has so far been confused by the fact that almost the only people who have bothered to read him are architects, who notoriously lack any sense of the world outside their own little narrow concerns), one must show two things. The first is the way that his writings did constitute a revolutionary ideology of the most explicitly political kind; the second is how that ideology has in fact been even more influential on our civilisation in the past fifty years than most of us supposed.

Written in short, declamatory paragraphs of great power (and with a mass of photographs and drawings), Vers une Architecture takes us at once into the beguiling world of the prophet of imminent revolution. 'A great epoch has begun. There exists a new spirit.' The age-old archetype is at work— the present age is infinitely corrupt, stifling and decayed: it must be swept away with insuperable violence: then paradise will emerge. Le Corbusier is in no doubt about how corrupt the present age (1923) is. Men are dying, suffocating under something much more fundamental than mere outmoded political systems: 'it is a question of building which is at the root of the social unrest of today.' Society is literally dying, because 'unworthy houses . . . ruin our health and morale ... our houses disgust us; we fly from them and frequent restaurants

and night-clubs . . we are becoming demoralised' (at this early stage it is all slightly comic).

But have no fear! A 'great epoch' is bursting into life all around us, the age of the machine, of the steamship, of the airplane, of the motor car—the age of mass-production (endless illustrations of all these wonderful things). We must throw off the past, or at least the European detritus of the past 2,000 years (a cathedral, for instance, is 'not very beautiful ... it interests us as the solution of a difficult problem'). But if we look at the clean lines of the latest Bugatti or American grain-elevators ('the magnificent FIRST FRUITS of the new age') we shall learn to claim 'in the name of the steamship, the airplane and the motor car, the right to health, logic, daring, harmony and perfection.' We must begin with the house, and recognise that it is (in the only phrase of Le Corbusier that most of us know) 'a machine for living in.' The challenge is to 'create the mass-production spirit. The spirit of constructing mass-production houses.' And above all 'the spirit of living in mass-production houses.'

Here speaks the totalitarian pur et simple, the architect who would create not just new buildings but new men—or rather the New Man. One of the most remarkable passages in Vers une Architecture is called 'The Manual of the Dwelling,' what the 'New Man' must learn to demand from his house (or rather how Corbusier insists he should live). 'Demand a new bathroom looking south, one of the largest rooms in the house or flat, the old drawing room for instance' (this must have 'the most up-to-date fittings' and 'gymnastic appliances'). 'Never undress in your bedroom' orders Le Corbusier, 'it is not a clean thing to do, and makes the room horribly untidy.' Put the kitchen at the top of the house.' Demand a vacuum cleaner' (who from, one might ask ?). Corbusier was deeply offended by the idea of walls being cluttered up with pictures and books. You must have special fittings in which to hide these messy objects away, and 'bring out your pictures one at a time, when you want them.' Scarcely a detail of life escapes the all-supervising diktat (not even Stalin would have gone so far as to insist that 'the gramophone, the pianola or the wireless will give you exact interpretations of first-rate music, and you will avoid catching cold in the concert hall, and the frenzy of the virtuoso').

And so at last we arrive at the vision of the paradise that is within our grasp: 'One day Auguste Perret created the phrase "A City of Towers." A glittering epithet which aroused the poet in us. A word which struck the note of the moment because the fact itself is imminent! Almost unknown to us, "the great city" engendering its plan' (we are on a great tide, part of something vast, mysterious and insuperable).

Just as no revolutionary can be without the mystical support of history's irresistible force (however much he condemns most of what it has to offer otherwise), so Corbusier then pauses to claim spiritual kinship with the spirit that built the Parthenon (Thidias would have loved to live in this standardised age . . his vision would have seen in our epoch the conclusive result of his labours'). We finally get a long series of sketches of the