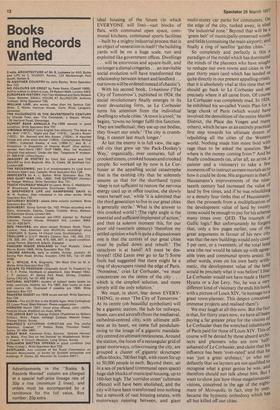 IN ANOTHER COUNTRY by John Bayley. Write Spectator Box 722.

THE HUGUENOTS IN THE SEVENTEENTH CENTURY by Charles Tyler, also The Camisards; a Sequel. Moore, 139 Hertford Road, Stevenage.

A SHEPHERD'S LIFE and HAMPSHIRE DAYS by W. H. Hudson. Also interested in his other works. Wiile Spectator Box 732.

SCOTLAND. Any volumes of the Royal Commission on Ancient Monuments, or books on Scottish antiquities and buildings. P. Clarke, 20, Morrison St. London SW11.

ideal housing of the future (in which EVERYONE will live)—vast blocks of flats, with communal open space, communal kitchens, communal sports facilities —built by a mighty industrial process that is an object of veneration in itself (`the building yards will be on a huge scale, run and exploited like government offices. Dwellings . . . will be enormous and square-built, and no longer a dismal congeries. .. an inevitable social evolution will have transformed the relationship between tenant and landlord ... our towns will be ordered instead of chaotic').

With his second book, Urbanisme (`The City of Tomorrow'), published in 1924, the social revolutionary finally emerges in its most devastating form, as Le Corbusier turns his attention from the individual dwelling to whole cities. 'Atown is atool,' he begins, 'towns no longer fulfil this function. They are ineffectual; they use up our bodies, they thwart our souls,' The city is crumbling, it cannot last much longer.'

At last the enemy is in full view, the ageold city that grew up `the Pack-Donkey's Way,' organically, over centuries, full of crooked streets, crooked houses and crooked people. So worked up by now is Le Corbusier at the appalling social catastrophe that is the existing city that he solemnly' assures us that for the shorthand typist 'sleep is not sufficient to restore the nervous energy used up in office routine, she slowly wears herself out,' while 'it is admitted that the third generation to live in our great cities is generally sterile.' What is the answer to this crooked world ? 'The right angle is the essential and sufficient implement of action,' and then (a solemn moment this, for our poor old twentieth century) 'therefore my settled opinion which is quite a dispassionate one is that the centres of our great cities must be pulled down and rebuilt.' The cataclysm is at hand ! All must be destroyed! (Did Lenin ever go so far ?) Some fools had suggested that there might be a ring of skyscrapers round the edge of Paris. 'Nonsense,' cries Le Corbusier, 'we must concentrate on the centre of the city which is the simplest solution, and more simply still the only solution.'

We must, in short, tear down EVERYTHING, to erect 'The City of Tomorrow.' At its centre (oh beautiful symbolism) will be a gigantic station, the hub for railways, buses, cars and aircraft (from the mediaeval, cathedral-centred city, with ultimate stillness at its heart, we come full pendulumswing to the image of a gigantic mandalacity centred on ultimate restlessness. Around the station, the focus of a rectangular grid of great motorways, criss-crossing the city, are grouped a cluster of gigantic skyscraper office-blocks, 700 feet high, with room for up to 50,000 people in each. Beyond them, set in a sea of parkland (communal open space) huge slab blocks of municipal housing, up to 160-feet high. The 'corridor street' (ultimate offence) will have been abolished, and the city will have been transformed into nothing but a network of vast housing estates, with motorways running between, and giant multi-storey car parks for commuters. On the edge of the city, tucked away, is sited 'the industrial zone.' Beyond that will be a 'green belt' of municipally-preserved woods and fields (containing the main airport); and finally a ring of satellite 'garden cities.'

So completely and perfectly is this a paradigm of the model which has dominated the minds of the planners who have sought to reshape our own towns and cities in the past thirty years (and which has landed Us quite directly in our present appalling crisis), that it is absolutely vital at this time that we should go back to Le Corbusier and see precisely where it all came from. Of course Le Corbusier was completely mad. In 1924, he exhibited his so-called Voisin Plan for a large chunk of Paris (which would have involved the demolition of the entire Marais District, the Place des Vosges and manY others), which he saw as an entirely practical first step towards his ultimate dream of 'rebuilding all the cities of the Western world. Nothing made him more livid with rage than to be asked the question 'But where is the money coming from ?' And he finally condescends (as, after all, an artist, a painter and a visionary) to take a few moments off to instruct us mere mortals as to how it could be done. His argument is that, if Haussmann's improvements of the nineteenth century had increased the value of land by five times, and if he was rebuilding to a density four tim'es that of Haussmann, then the proceeds from a multiplication of the development value of land by twenty times would be enough to pay for his scheme many times over. QED. The triumph of Gallic logic! But unfortunately he forgets that, only a few pages earlier, one of the great arguments in favour of his new city was that the new buildings would only cover 5 per cent, or a twentieth, of the total land area (the rest would be taken up with agreeable trees and communal sports areas). Jn other words, even on his own batty arithmetic, the development value of the land would be precisely what it was before! [fear Le Corbusier would not have made a Hart')' Hyams or a Joe Levy. No, he was a vet')' different kind of visionary (he ends his book with a picture of Louis XIV, 'in homage to a great town-planner. This despot conceived immense projects and realised them'). We may laugh at all this now. But the fact is that, for thirty years now, we have all been paying a far greater price for the visions of Le Corbusier than the wretched inhabitants of Paris paid for those of Louis XIV. This of course will be denied by those absurd architects and planners who are now halfashamed of Le Corbusier, and claim that his influence has been 'over-rated' and that he was 'just a great architect,' or who say defiantly that we laymen are not qualified to recognise what a great genius he was, and therefore should not talk about him. But I want to show just how those megalomaniac visions, conceived in the age of the nightmare of Metropolis, in fact, step by steP, became the hypnotic orthodoxy which has all but killed off our cities.