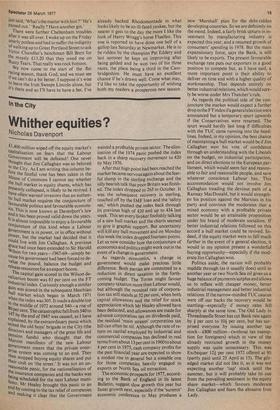 41,400 million wiped off the equity market's capitalisation on fears that the Labour Government will be defeated! One never !bought that Jim Callaghan was so beloved in the City. As I am writing this column before the fateful vote has been taken in the House of Commons I cannot say whether the bull market in equity shares, which has Presently collapsed, is likely to be revived. I have often warned investors that an authentic bull market requires the conjuncture of favourable politics and favourable economies. This is now known as Daventores law and it has been proved valid down the years. It is almost impossible to enjoy a favourable eorituncture of this kind when a Labour government is in power, or in office without Power, but the market had decided that it could live with Jim Callaghan. A previous grace had once been extended to Sir Harold Wilson for two years-1967-69—simply because his government had been forced to devalue the pound, balance the budget and release resources for an export boom. The capital gain scored in the Wilson dev. aluation boom was 83 per cent on the FT Industrial index. Curiously enough a similar gain was Scored in the subsequent Heathian bull market which began in March 1971 When the index was 305. It made a double top in the middle of 1972 around 540—a rise of 80 Per cent. The catastrophic fall from 540 to 147 by the end of 1947 was caused, as I have explained, by the extraordinary panic which seized the old boys' brigade in the City (the directors and managers of the great life and Pension funds) who thought that the Marxist manifesto of the new Labour goVernment meant that the private enterprise sYstem was coming to an end. They then stopped buying equity shares and put their cash on 'the street.' It was not an unreasonable panic, for the nationalisation of the insurance companies and the banks was 12eIng scheduled for the next Labour manifesto, Mr Healey brought this panic to an end by coming to the tax relief of companies and making it clear that the Government wanted a profitable private sector. The elimination of the 1974 panic pushed the index back in a sharp recovery movement to 420 by May 1976, After that high point had been reached the market became nervous again about the fearful slump in the sterling exchange and the silly bearish talk that poor Britain was finished. The index dropped to 265 in October. It was the subsequent recovery in sterling, touched off by the IMF loan and the 'safety net,' which pushed the index back through its previous high of 420 and up to 434 last week. This set every broker foolishly talking Of a new bull market and the charts seemed to give it graphic support. But uncertainty will kill any bull movement and on Monday this week the index dropped fourteen points. Let us now consider how the conjuncture of economics and politics might work out in the event of a change in government.

As regards economics, a change in government would make precious little difference. Both parties are committed W a reduction in direct taxation in the forthcoming budget. The Tories might favour company taxation more than Labour would, but although the nominal rate of corporation tax still stands at 52 percent, when both capital allowances and the relief for stock appreciation which Mr Healey allowed have been deducted, and allowances are made for advance corporation tax on dividends paid, the residual 'main stream' corporation tax bill can often be nil. Although the rate of return on capital employed by industrial and commercial companies has declined in real terms from about 13 per cent in 1960 to about 4 per cent in 1975, cash company profits for the past financial year are expected to show a modest rise in general but a sizeable one for those companies heavily engaged in exports or North Sea oil extraction.

The economic prospects for 1977, accord ing to the Bank of England in its latest Bulletin, suggest slow growth this year but faster growth next, especially if the 'summit' economic conference in May produces a

new 'Marshall' plan for the debt-ridden developing countries. So we are definitely on the mend. Indeed, a fairly brisk upturn in investment by manufacturing industry is expected this year, and a resumed growth of consumers' spending in 1978. But the main expansionary force, says the Bank, is still likely to be exports. The present favourable exchange rate puts our exporters in a good position to compete but, as I have said, a more important point is their ability to deliver on time and with a higher quality of workmanship. That depends entirely on better industrial relations, which would surely be worse under Mrs Thatcher's rule.

As regards the political side of the conjuncture the market would expect a further drop in the FT index if a general election were announced but a temporary spurt upwards if the Conservatives were returned. The spurt would hardly last long if difficulties with the TUC came running into the headlines. Indeed, in my opinion, the best chance of maintaining a bull market would be if Jim Callaghan won his vote of confidence through an understanding with the Liberals on the budget, on industrial participation, and on direct elections to the European parliament, which would seem fair and reasonable to fair and reasonable people, and save whatever conscience Labour has. This accommodation would not involve Jim Callaghan treading the devious path of a Ramsay MacDonald, but it would strengthen his position against the Marxists in his party and convince the moderates that a mixed economy with a profitable private sector would be an attainable proposition under his brand of moderate socialism. If better industrial relations followed on this accord a bull market could be revived. Indeed, if the equity market were to fall much further in the event of a general election, it would in my opinion present a wonderful buying opportunity—especially if the moderate Jim Callaghan won.

Politics aside, the nation will probably muddle through (as it usually does) until in another year or two North Sea oil gives us a huge balance of payments surplus and allows us to reflate with cheaper money, better industrial management and better industrial relations. If the narrow-minded TUC caucus were off our backs the recovery would be startling—especially if money rates fell sharply at the same time. The Old Lady in Threadneedle Street has cut Bank rate again by 5 per cent to 104 per cent, but has surprised everyone by issuing another tap stock—f,800 million—(without tax exemption for foreigners) which in view of the already restricted growth in the money supply was quite unnecessary. This was Exchequer 12f per cent 1972 offered at 96 (partly paid until 25 April at 15). The giltedged market did not like it, as it was not expecting another 'tap' stock until the summer, but it will probably take its cue from the prevailing sentiment in the equity share market—which favours moderate Jim Callaghan and fears the abrasive Iron Lady.