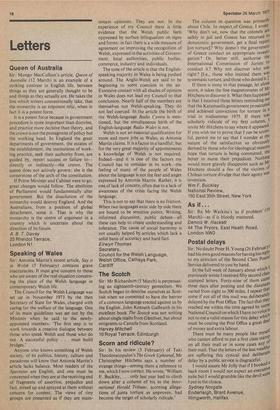 Sir: Mungo MacCullum's article, Queen of Australia (12 March) is an example of a striking contrast in English life, between things as they are generally thought to be and things as they actually are. He takes the line which writers conventionally take, that the monarchy is an impotent relic, when in fact it is a potent force.

It is a potent force because in government procedure is rpore important than doctrine, and practice more decisive than theory, and the crown is not the protagonist of policy but the working head, In England the great departments of government, the estates of the establishment, the institutions of working practice, seek their authority from, are guided by, report success or failure to— directly or indirectly—the crown. The queen does not actively govern; she is the cornerstone of the arch of the constitution.

If Prime Minister and Cabinet were to go, great changes would follow. The abolition of Parliament would fundamentally alter government. But the dissolution of the monarchy would destroy England. And the Australians, from a position of global detachment, sense it. That is why the monarchy is the centre of argument in a country which is uncertain about the direction of its future.