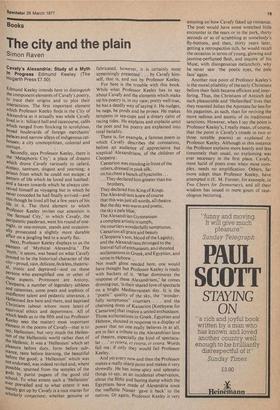 The city and the plain

Cavafy's Alexandria: Study of a Myth in Progress Edmund Keeley (The Hogarth Press £7.50)

Edmund Keeley intends here to distinguish the component elements of Cavafy's poetry, tO trace their origins and to plot their interactions. The first important element Which Professor Keeley finds is the City of Alexandria as it actually was while Cavafy lived in it : billiard hall and racecourse, cafés which ranged from finicking to scrofulous, broad boulevards of foreign merchants' Palaces and narrow alleys of indigenous cathouses; a city cosmopolitan, colonial and corrupt.

Secondly, says Professor Keeley, there is the 'Metaphoric City': a place of dreams Which drove Cavafy variously to cafard, ecstasy, tantrum, disgust and yearning; a Prison from which he could not escape; a Pattern of life which he loved and loathed: and a haven towards which he always conceived himself as voyaging but in which he never conceded he had finally arrived—and this though he lived all but a few years of his life in it. The third element to which Professor Keeley invites our attention is the Sensual City,' in which Cavafy, the Peripatetic paederast, went his round of onenight, or one-minute, stands and occasionally prosecuted a slightly more durable affair on a jangling bed in a scurfy flat. Next, Professor Keeley displays to us the element of 'Mythical Alexandria.' The myth,' it seems, was based on what Cavafy Posited to be the historical character of the citY—proud, vain, delicate, feckless, theatrical, ironic and depraved—and on those Persons who exemplified one or other of these aspects. Prominent are Antony, Cleopatra, a number of legendary athletes and catamites, some poets and sophists of indifferent talent and pedantic utterance, a Hellenised Jew here and there, and baptised Christians (about whom more later) of equivocal ethics and deportment. All of Which leads us to the fifth and (as Professor Keeley sees the matter) most important element in the poems of Cavafy—that is to ,say, Hellenism; but very much the Hellen'sm of the Hellenistic world rather than of the Hellenic. It was a 'Hellenism' which set Pleasure before duty, form before substance, taste before learning, the beautiful before the good; a 'Hellenism' which was not endorsed, was indeed reviled and, where Possible, spurned from the temples of the gods by purist pagans of the good old school. To what extent such a 'Hellenism' ever prevailed and to what extent it was Merely got up by Cavafy is a nice matter for scholarly conjecture; whether genuine or

fabricated, however, it is certainly most appetisingly presented • . . by Cavafy himself, that is, and not by Professor Keeley.

For here is the trouble with this book. While what Professor Keeley has to say about Cavafy and the elements which make up his poetry is, in my view, pretty well true, he has a deadly way of saying it. He nudges, he nags, he prods and he proses. He makes tempests in tea-cups and a dreary calm of racing tides. He explains and explains until the poet and his poetry are explained into total banality.

There is, for example, a famous poem in which Cavafy describes the coronation, before an audience of appreciative but sceptical 'Alexandrians, of the children of Cleopatra: Caesarion was standing in front of the others, dressed in pink silk, on his chest a bunch of hyacinths ...

The Alexandrians knew of course that this was just all words, all theatre.

But the day was warm and poetic, -the sky a pale blue, The Alexandrian Gymnasium a complete artistic triumph, the courtiers wonderfully sumptuous, Caesarion all grace and beauty

(Cleopatra's son, blood of the Lagids); and the Alexandrians thronged to the festival full of enthusiasm, ansl shouted acclamations in Greek, and Egyptian, and some in Hebrew,.

Not much gloss needed here, one would have thought but Professor Keeley is ready with buckets of it. 'What dominates the response of these Alexandrians,' he comes droning out, 'is their shared love of spectacle on a bright Mediterranean day. It is the "poetic" quality of the sky, the "wonder

fully sumptuous" courtiers . . and the charming dress of Kaisarion [Keeleyese for Caesarionl that inspire a united enthusiasm. Those acclamations in Greek, Egyptian and Hebrew, shouted in response to a display of power that no one really believes in at all, are in fact a tribute to the Alexandrian love of theatre, especially the kind of spectacular . . .' et cetera, et cetera, et cetera. Words fail me; if only they would fail Professor Keeley.

And yet every now and then the Professor makes a really sharp point and makes it very shrewdly. He has some spicy and splenetic things to say, as an incidental observation, about the filthy and boring dump which the Egyptians have made of Alexandria since the ineffable Nasser 'gave it back' to the natives. Or again, Professor Keeley is very

amusing on how Cavafy faked up romance. The poet would have some wretched little encounter in the rears or in the park, thirty seconds or so of scrabbling at somebody's fly-buttons, and then, thirty years later, getting a retrospective itch, he would recall the occasion in terms of young, glowing and jasmine-perfumed flesh, and inquire of his Muse, with disingenuous melancholy, why he never saw . 'the poetic eyes, the pale face' again.

Another nice point of Professor Keeley's is the moral pliability of the early Christians before their faith became efficient and interfering. Thus, the Christians of Antioch led such pleasurable and `Hellenified' lives that they resented Julian the Apostate far less for his paganism, as such, than for reviving the more tedious and ascetic of its traditional sanctions. However, when I say the point is Professor Keeley's, I really mean, of course, that the point is Cavafy's (made in two or three notable poems) as explained by Professor Keeley. Although in this instance the Professor explains more keenly and less tiresomely than usual, no explaining was ever necessary in the first place. Cavafy, most lucid of poets even when most complex, needs no amplification. Others, far more adept than Professor Keeley, have attempted it (E. M. Forster, for example, in Two Cheers for Democracy), and all their wisdom has issued in mere gouts of tautologous hectoring.