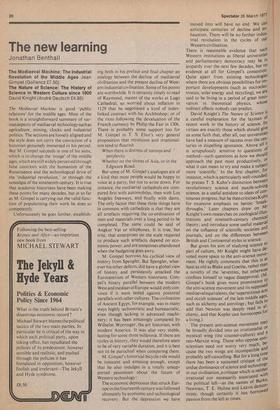 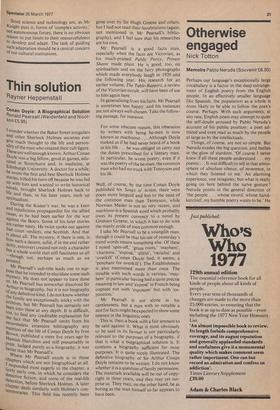 The Mediaeval Machine: The Industrial Revolution of the Middle Ages Jean Gimpel (Gollancz £7.50)

The Nature of Science: The History of Science in Western Culture since 1600 David Knight (Andre Deutsch £4.95) The Mediaeval Machine is good 'public relations' for the middle ages. Most of the book is a straightforward summary of various aspects of mediaeval technology such as agriculture, mining, clocks and industrial politics. The sections are loosely aligned and the style does not carry the conviction of a historian genuinely immersed in his period. But M. Gimpel succeeds in one of his aims, which is to change the 'image' of the middle ages, which are still widely perceived through false contrasts with the humanism of the Renaissance and the technological drive of the 'industrial revolution,' or through the nostalgia of the nineteenth century. It is true that academic historians have been making these points for many decades, but in so far as M. Gimpel is carrying out the valid function of popularising their work he does so competently.

ing both in his preface and final chapter an analogy between the decline of mediaeval civilisation and the present decline of Western industrial civilisation. Some of his points are worthwhile. It is certainly timely to read of Raymond, master of the works at Lugo Cathedral, so worried about inflation in 1129 that he negotiated a kind of indexlinked contract with his Archbishop; or of the riots following the devaluation of the Franch currency by Philip the Fair in 1306. There is probably some support too for M. Gimpel in T. S. Eliot's very general proposition that mysticism and irrationalism tend to flourish When there is distress of nations and ' perplexity Whether on the shores of Asia, or in the Edgware Road.

But some of M. Gimpel's analogies are of a kind that most people would be happy to voice at a party, but not to write down. For instance, the mediaeval cathedrals are compared first with automobiles, then with Los Angeles freeways, and finally with dams. The only factor that these three things have in common with cathedrals is that they are all artefacts requiring the co-ordination of men and materials over a long period to be completed. The same could be • said of Angkor Vat or telephones. It is true, but trite, that enterprises on the scale required to produce such artefacts depend on economic power, and are sometimes abandoned when the budgeting goes awry.

M. Gimpel borrows his cyclical view of history from Spengler. But Spengler, whatever his other defects, did have a global view of history and persistently attacked the Eurocentrism of Western historians. Gimpel's binary parallel between the modern West and mediaeval Europe would only convince if it were tested against potential parallels with other cultures. The civilisation of Ancient Egypt, for example, was in many ways highly technocratic and bureaucratic, even though lacking in advanced machinery; it has been amusingly compared by Wilhelm Worringer, the art historian, with modern America. It was also very stable, lasting for some three millennia. If there are cycles in history, they would therefore seem to be of very variable duration, and it is best not to be parochial when comparing them.

M. Gimpel's historical bicycle-ride would be innocent and amusing enough, except that he also indulges in a totally unsupported pessimism about the future of Western technology: The economic depression that struck Europe in the fourteenth century was followed • ultimately by economic and technological recovery. But the depression we have

moved into will have no end. We can anticipate centuries of decline and exhaustion. There will be no further industrial revolution in the cycles of our Western civilisation.

There is reasonable evidence that such Western institutions as liberal universities and parliamentary democracy may be in jeopardy over the next few decades, but no evidence at all for Gimpel's contention. Quite apart from existing technologies where there are obvious possibilities for important developments (such as microelectronics, solar energy and recycling), we are said to be living in a period of great innovation in theoretical physics, whose indirect effects nobody can predict. David Knight's The Nature of Science is a careful explanation for the layman of recent work in the history of science. Its virtues are exactly those which should gi.ve us some faith that, after all, our universities have had a measure of success over the centuries in dispelling ignorance. Above all It is scrupulously sensitive to questions of method—such questions as how we should approach the past most productively, or what it can mean to try and make a subject more 'scientific.' In the first chapter, for instance, which is particularly well-rounded, he praises T. S. Kuhn's distinction between revolutionary science and ' puzzle-solving science, as a useful antidote to ideas of continuous progress; but he then criticises Kuhn for excessive emphasis on heroic 'breakthroughs.' Later chapters draw on Mr Knight's own researches on zoological innstrations and nineteeth-century chemical theory; and introduce some useful material on the influence of scientific societies and journals, and on the differences between British and Continental styles in science. But given his aim of studying science as part of culture, Mr Knight might have clevoted more space to the anti-science move" ment. He rightly comments that this is at least as old as Blake and Goethe, rather th.an a novelty of the 'seventies, but otherwise confines himself to vague disapproval. (M. Gimpel's book gives more prominence t° the anti-science movement and its supPosed mediaeval equivalents, the 'superstitious arts and occult sciences' of the late middle ages, such as alchemy and astrology; but fails to add that Newton was deeply read in alchemy, and that Kepler cast horoscopes fbr a living.) The present anti-science movement, may be broadly divided into an irrationalist or mystical wing (the counter-culture) and .a neo-Marxist wing. Those who oppose an scientism need not worry very much, be: cause the two wings are incompatible and

probably self-cancelling. But for a long there has been a sustained critique

there has been a sustained critique

undue dominance of science and technologYr in our civilisation, acritique which is neithe irrational nor necessarily associated witn the political left—as the names of Burke, Newman, T. E. Hulme and Leavis dem:endstrate, though certainly it has borro passion from the left at times.

Since science and technology are, as Mr Knight puts it, forms of 'complex activity,' not autonomous forces, there is no obvious reason to put limits to their resourcefulness to develop and adapt. The task of guiding such adaptation should be a central concern of our cultural institutions.