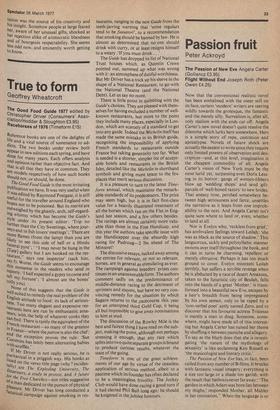 Reference books are one of the delights of life and a vital source of sustenance to addicts. The two books under review both appear in new editions each spring, and have done for many years. Each offers analysis and opinion rather than objective fact. And that is all that they have in common. They are models respectively of how such books Should not, or should, be done.

The Good Food Guide is the most irritating Publication we have. It was very useful when it was edited by Raymond Postgate, it is still useful for the traveller around England who hopes not to be poisoned. But its merits are outweighed by the ghastly, arch, self-regarding whimsy which has become the Guide's Style under its present editor : 'Trip no further than the City Sweetings, where journeys end in fish lovers' meetings' ; 'There are more flames (from the lamp) than you are likely to see this side of hell or a Hindu funeral Pyre'; ' "I may never be hung in the [late] gallery but I am hooked on the restaurant," says one inspector' (sack him, say I). Worse, the Guide seems to encourage this nonsense in the readers who send in rePorts: '1 half expected a gypsy to come and tell my fortune' ; 'I almost ate the bones (silly you). None of this suggests that the Guide is well suited to remedy the real problem of the English attitude to food: its lack of' seriousness. Too many elegant and expensive restaurants here are run by enthusiastic amateurs, with the help of whatever cooks they Can find. There is rarely the equivalent of the French restaurant --so many of the greatest In France—where the patron is also the chef; t.trid the exception proves the rule: 'Sue Cummins has lately been alternating babies With souffles.' If Mr Driver is not really serious, he is Puritanical in a priggish way. His books as listed on the verso title page (why ? incidentally). are The Exploding University, The Disarmers, a study in protest, and A .fitture /or the Free Churches—not titles suggestive of a man dedicated to the pursuit of physical ._Pleasure. Mr Driver has long conducted a fanatical campaign against smoking in res taurants, ranging in the new Guide from the teeth-jarring warning that 'some regulars tend to be fumatorr, to a recommendation that smoking should be banned by law. He is almost as determined that no one should drink with curry, or at least resigns himself to a weary ,'If you must drink...'

The Guide has dropped its list of National Trust houses which, as Quentin Crewe pointed out, summed up what was wrong with it : an atmosphere of dutiful worthiness. But Mr Driver has a trick up his sleeve in the shape of a National Restaurant, to go with the National Theatre (and the National Debt). Let us say no more.

There is little point in quibbling with the Guide's choices. They are pleased with them

selves for having excluded a number of well known restaurants, but more to the point they include many places, especially in Lon don, which are scarcely of a standard to get

into any guide. indeed the Michelin itself has made the same mistake in its British guide,

recognising the impossibility of applying French standards to restaurants outside France but taking generosity too far. What

is needed is a shorter, simpler list of acceptable hotels and restaurants in the British Isles, detailed like the Michelin in shorthand symbols and giving more space to the few places that merit serious discussion.

It is a pleasure to turn to the latest Timeform annual, which maintains the remark

able standards of its predecessors. The price may seem high, but it is in fact first-class value for a heavily illustrated treatment of all the horses which ran on the Flat in Eng land last season, and a few others besides. The ratings are almost certainly more valu able than those in the Free Handicap, and this year the authors take specific issue with the Handicapper over the absurdly high rating for Padroug-2 lbs ahead of The Minstrel!

The discussive essays, tucked away among the entries for relevant, or not so relevant, horses, are in general as stimulating as ever.

The campaign against breeders' prizes continues in an unanswerable form. The authors comment sadly on the predominance of middle-distance racing to the detriment of sprinters and stayers, but have no very con vincing remedy for the situation by which Sagaro returns to the racecourse this year for an attempted third Gold Cup, it being all but impossible to give away nominations to him at stud.

ject, making the point, although not perhaps stressing it enough, that any race which splits into two quite separate groups is bound to produce curious results, whatever the state of the going.

application of serious method, albeit to a pastime which its founder has often declared to be a meaningless frivolity. The Jockey Club would have done racing a good turn if it had elected Phil Bull long ago : he should be knighted in the jubilee honours.