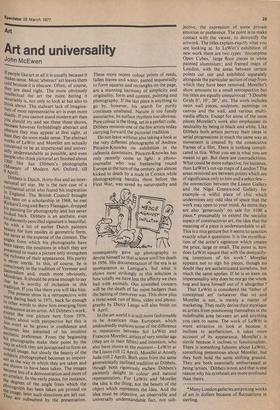 People like art at all it is usually because it

makes sense. Most 'abstract' art leaves them cold because it is obscure. Often, of course, they are dead right. The more obviously intellectual the art the more boring it invariably is, not only to look at but also to think about. The stalwart lack of imagination of most representative art is even more deadly. If you cannot stand modern art then You should try and see these three shows, because however forbiddingly abstract and Obscure they may appear at first sight, at least they do soon make sense. The abstract works of LeWitt and Morellet are actually conceived to be as impersonal and universally understandable as possible, and even People who think pictorial art finished about 1500 like Jan Dibbets's photographs (Museum of Modern Art, Oxford, till 9 April).

Dibbets is Dutch, thirty-five and an inter

national art star. He is the rare case of a continental artist who found his inspiration in England. The British Council brought him here on a scholarship in 1968, he met Richard Long and Barry Flanagan, dropped h, is Painting for photography and has never looked back. Dibbets is an aesthete, even his discreetly pencilled signature is beautiful. ,As with a lot of earlier Dutch painters but for him resides in geometric form, out never at the expense of the content. The been from which his photographs have °e'en taken, the positions in which they are Presented to make a picture only strengthen the richness of their appearance. His purity Is never sterile. In this, of course, he is cc,t)nsciously in the tradition of Vermeer and ‘3aenredam and, much more obviously, Mondrian. It should be praise enough to say that he is worthy of inclusion in this tradition. If you like them you will like him.

The present show is a retrospective with

!vork dating back to 1971, back far enough iT1 other words to show him emerging from adolescence as an artist. All Dibbets's work, e.,)ccept the one picture here from 1976, !Inkers about with perspective but this is becomes overt as he grows in confidence and °ecomes less ashamed of his intuitive ae. sthetic preference. From the beginning r‘lia Photographs make their point by the Way in which they are juxtaposed to form an overall image, but slowly the beauty of the subjects

ant as the way in which they are taken and a, re shown to have been taken. The images become less of a demonstration and more of an artefact. In the early pieces, for instance, the degrees of the angle from which the 13h t °:1138raPh has been taken are printed on h -te Image, later such directions are left out. hey are subsumed by the presentation.

These more recent colour prints of reeds, fallen leaves and water, pasted sequentially to form squares and rectangles on the page, are a stunning harmony of simplicity and originality, form and content, painting and photography. If the last piece is anything to go by, however, his search for purity continues unabated. Nature is too fussily associative, its surface rhythms too obvious. Pure colour is the thing, set in a perfect cube. Dibbets remains one of the few artists today carrying forward the pictorial tradition.

Do not leave without also taking a look at the very different photographs of Andrew Pitcairn-Knowles on exhibition in the cafeteria downstairs. Pitcairn-Knowles has only recently come to light: a photojournalist who was freelancing round Europe at the turn of the century, got almost kicked to death by a mule in Corsica while photographing bandits there before the First War, was saved by naturopathy and ,Ed,ref consequently gave up photography to devote himself to that science until his death in 1956. His documentation of the era is as spontaneous as Lartigue's, but what it shows most strikingly in this selection is how totally we have lost the affinity we then had with animals. Our townified concern will be the death of far more badgers than the baiting of them ever was. This show plus a three-week run of films, video and photographs by Darcy Lange will also finish on 9 April.

In the art world it is still more fashionable to be American than European, which undoubtedly explains some of the difference in reputation between Sol LeWitt and Francois Morellet, artists of very similar age (they are in their fifties) and intention, who also have shows at the moment—LeWitt at the Lisson (till 12 April), Morellet at Annely Juda (till 2 April). Both stem frOm the same geometrically inclined tradition as Dibbets, though both rigorously eschew Dibbets's painterly delight in colour and natural representation. For LeWitt and Morellet the idea is the thing, not the beauty of the object which represents the idea. And the idea must be objective, an observable and universally understandable fact, not sub

jective, the expression of some private emotion or preference. The point is to make contact with the viewer, to demystify the artwork. The titles explain exactly what you are looking at. In LeWitt's exhibition of new work there are two types: 'Incomplete Open Cubes,' large floor pieces in white painted aluminium; and framed maps of London, with the areas between certain points cut out and exhibited separately alongside the particular section of map from which they have been removed. Morellet's show amounts to a small retrospective but his titles are equally unequivocal: '3 Double Grids 0', 10°, 20°,' etc. The work includes neon wall pieces, sculpture, paintings on canvas and the wall, and various multimedia effects. Except for some of the neon pieces Morellet's work also emphasises its neutrality by being in black and white. Like Dibbets both artists portray their ideas in serial progressions in much the same way as movement is created by the consecutive frames of a film. There is nothing complicated in this. What you see is what you are meant to get. But there are contradictions. What could be more subjective, for instance, than LeWitt's cut-up maps of London? The areas removed are between points which are of significance only to him and a select few— the connection between the Lisson Gallery and the Nigel Greenwood Gallery for example—a wilful piece of chic which undermines any odd idea of space that the work may, open to your mind. As items they are also 'generously' on sale for 8100 a piece,* presumably to extend the socialist aspect of constructivist art, the idea that the meaning of a piece is understandable to all. This is a nice gesture but it seems to sanction exactly what it questions. It is the mystification of the artist's signature which creates the price, large or small. The point is, how does LeWitt square that with the demystifying intentions of his work ? Morellet appears not to sign his pieces, though no doubt they are authenticated somehow, but much the same applies. If he is so keen on impersonality why does he not go the whole hog and leave himself out of it altogether?

That LeWitt is considered the 'father of conceptual art' (whatever that is) and Morellet is not, is merely a matter of marketing. They really derive their mystique as artists from positioning themselves in the indefinable area between art and anything you care to name. The work of LeWitt is more attractive to look at because it inclines to aestheticism, it takes more account of its appearance. Morellet's is sterile because it inclines to functionalism. There is something fulsome about LeWitt, something pretentious about Morellet, but they both hold the same shifting ground. They are both essentially embarrassed at being 'artists.' Dibbets is not, and that is one reason why his syntheses are more profound than theirs.

*Many London galleries are pricing works of art in dollars because of fluctuations in sterling.