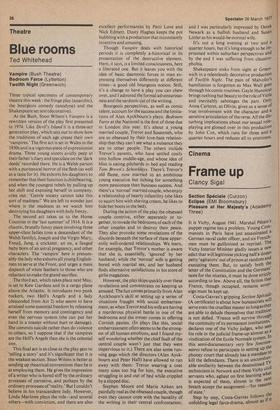 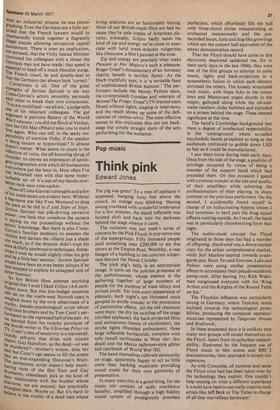 It is Vichy, August 1941. Marshal Petain's puppet regime has a problem. Young Communists in Paris have just assassinated a German naval cadet officer, and six Frenchmen must be guillotined as reprisal. The Vichy Interior Minister gladly issues a new edict that will legitimise picking half a dozen petty `agitators' out of prison at random and executing them. But, to satisfy both the, letter of the Constitution and the Germans taste for the niceties, it must be done strictlY according to law. Above all, the fiction that France, though occupied, remains sovereign must be kept up. Costa-Gavras's gripping Section Speciale (A certificate) is about how bureaucrats Will serve even the cruellest master as long as the)' are able to delude themselves that tradition is not defied. 'France will survive through, the continuity of its permanent institutions, declares one of the Vichy judges, who sees his role in the judicial frame-up almost as a vindication of the Ecoie Normale system. In this semi-documentary very few fonctiannaives refuse to participate in setting up the phoney court that already has a mandate to kill the defendants. There is an uncomfort.; able similarity between the desensitised Tv.. technicians in Network and these Vichy civil servants who, aghast on first learning what is expected of them, almost in the next breath accept the assignment—Tor reasons of state.' Step by step, Costa-Gavras follows th.e.

f It unfolding legal farce-drama, almost as i

Were an industrial process he was photographing. Even the Germans are a little surprised that the French lawyers would so 9nashamedly knock together a flagrantly Illegal statute allowing retroactive capital Punishment. There is even an implication, not Pursued, that the Vichy Justice Minister convinced his colleagues with a threat the Germans may not have made: that speed is essential to head off a much bloodier purge. The French crawl, lie and double-deal so that the Germans can always look 'correct. Correctness is all. One of the great strengths of Section Speciale is the way Costa-Gavras's actors smoothly persuade each other to break their own consciences. You are mobilised—we all are,' a judge tells one of his reluctant colleagues. The gut argument is patriotic flattery of the World War I veterans: you did not flinch at Verdun, now the Old Man (Petain) asks you to stand firth again. Who can tell, in the seedy respectability of wartime Vichy, if the speaker Is being sincere or hypocritical ? It almost doesn't matter. What seems to count is the Inflection of voice, the all-knowing shrug of Shoulder, to convey an impression of apologetic pragmatism with which all bureaucrats everywhere put the boot in. How often I've 'net Whitehall men with that same imperturbable air of it's-out-of-my-hands-nowbetter-luck-next-time-sucker.

of of Costa-Gavras's strengths and a few

weaknesses are evident here. Without a °Ig-name star like Yves Montand to drag the Pace as he did in Z and State of Siege, Sect ion Speciale has pile-driving narrative Pnwer; one feels that somehow the camera Is Vying on the proceedings without the actors' knowledge. But there is also CostaGavras's familiar tendency to sweeten the victims and darken the villains just a shade too much, as if the director didn't trust his OWn skilfully unobtrusive techniques. Sometimes I wish he would slightly relax his grip and be a little less 'serious.' Section Speciale would have been an even better picture if he had stopped to explore its untapped vein of bitter humour. 8° few British films attempt anything original that I wish I liked Eclipse (AA certili cate) more. But this low-budget suspense tale set on the north-west Scottish coast is weighed down by the twin albatrosses of a murky, pseudo-psychological script about rival twin brothers and by Tom Conti's performance as the repressed half of the pair. As the learned from his twitchy portrayal of h „.,,e Jewish writer in The Glittering Prizes on TV, Conti's idea of sensitivity is a mannered, moody self-pity that drips with injured

bestmurdered ?—brother's widow, does her t but Conti's ego seems to fill the screen Ihe e an ever-expanding Donovan's brain. Portentous script doesn't help much: during most of the film Tom and Gay

,runkenly, relentlessly pick at the knot of

their relationship with the brother whose charisma, we are assured, has practically s,trangled them. Maybe so. But it's hard to believe in the vitality of a dead man whose living relations are so fashionably boring. Most of our British-made films are bad because they're pale copies of American pictures; ironically, Eclipse badly needs the kind of zip and energy we've come to associate with lurid trans-Atlantic vulgarities like Obsession, a film I panned at the time.

Zip and energy are precisely what make Pleasure at Her Majesty's such a pleasure. Roger Graef's documentary of an Amnesty charity benefit is terribly funny. As the blurb truthfully says, it is 'a veritable feast of sophisticated British humour.' The performers include the Monty Python team, the (overpraised) Goodies and veterans of Beyond The Fringe. Graef's TV-trained team filmed without lights, staging or interviews, and the result shows up some of the deficiencies of cinema-verite. The most effective scenes in this enjoyable film are not backstage but simply straight shots of the acts performing for the audience.