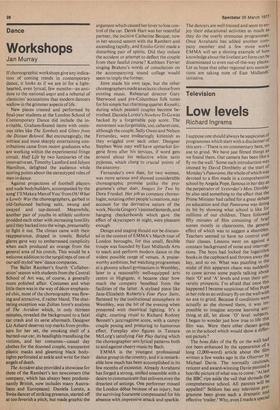 If choreographic workshops give any indication of coming trends in contemporary dance, it looks as if we are in for a lighthearted, even lyrical, few months—an antidote to the national angst and a rebuttal of classicists' accusations that modern dancers wallow in the grimmer aspects of life.

New pieces created and performed by final-year students at the London School of Contemporary Dance did include the inevitable, Graham-fixated items with ominous titles like The Symbols and Glints from the Distant Beloved. But encouragingly, the wittiest and most sharply entertaining contributions came from recent graduates who are working within the experimental fringe circuit. Half Life by two luminaries of the innovative set, Timothy Lamford and Julyen Hamilton, delighted the audience while scoring points about the stereotyped roles.of men in dance.

Against projections of football players and nude bodybuilders, accompanied by the song' I'll Make a Man of You' from Oh! What a Lovely War the choreographers, garbed in old-fashioned bathing suits, swung .and swayed and tap-danced. Meanwhile, another pair of youths in athletic uniform prodded each other with increasing hostility until they backed into the wings, presumably to fight it out. The climax came with their reappearance, draped in towels. Baleful glares gave way to embarrassed, complicity when each produced an orange from the general area of his crotch. This would be a welcome addition to the turgid reps of one of our self-styled 'new' dance companies.

The Ballet Rambert's fourth 'Collaboration' season with students from the Central School of Art was, of course, a generally more polished affair. Costumes and what little there was in the way of decor emphasised chic, most of the choreography was flowing and attractive, if rather bland. The shattering exception was Zoltan Imre's analysis of The Accident which, in only thirteen minutes, revealed the background to a fatal car crash and its eerie aftermath. Designer Liz Ashard deserves top marks from professors for her set, the smoking shell of a burned-out car, its headlights transfixing the victims, and her costumes—casual day clothes for the doomed couple, transparent plastic masks and gleaming black bodytights perforated at ankle and wrist for their angels of death.

The Accident also provided a showcase for three of the Rambert's ten newcomers (the company, which has always been predominantly British, now includes many Australians and Europeans). Daniela Loretz, a Swiss dancer of striking presence, started off at too feverish a pitch, but made graphic the argument which caused her lover to lose control of the car. Derek Hart was her resentful partner, the incisive Catherine Becque, now in her second season with the Rambert and ascending rapidly, and Emilio Gritti made a disturbing pair of spirits. Did they induce the accident or attempt to deflect the couple from their fateful course ? Kathleen Ferrier singing Brahms's words of consolation on the accompanying sound collage would seem to imply the former.

Imre made his own tape, but the other choreographers made an eclectic choice from existing music. Rehearsal director Gary Sherwood used pre-Columbian folk tunes for his simple but charming quartet Kuyaiki, during which peasant couples become betrothed. Daniela Loretz's Nowhere To Go was backed by a forgettable pop score. The movement was forgettable, too, cabaret cute, although the couple, Sally Owen and Nelson Fernandez, were endearingly kittenish as they wriggled over each other. Designer Stephen West may well have upmarket lingerie firms after his services, if word gets around about his seductive white satin pyjamas, which clung to crucial points of the anatomy.

Fernandez's own duet, for two women, was more serious and showed considerable choreographic promise unlike the programme's other duet, Images for Two by Dora Frankel. Her job as company choreologist, notating other people's creations, may account for the derivative nature of the work. Nicola Gregory's painted leotards, and hanging checkerboards which gave the effect of skyscrapers at night, were pleasant enough.

Design and staging should not be discussed in the context of EM MA's March tour of London boroughs, for this small, flexible troupe was founded by East Midlands Arts to teach and perform modern dance in the widest possible range of venues. A praiseworthy ambition, but watching programmes at a gloomy school gymnasium in Wembley, later in a reasonably well-equipped arts centre in Highgate, it became clear how much the company benefited from the facilities of the latter. A stylised piece like Jane-Elizabeth Roberts's Four Piece Suite, flattened by the institutional atmosphere in Wembley, was the hit of the evening when presented with theatrical lighting. It's a slight, courting ritual to Richard Rodney Bennett's jazz/ragtime score, with a campy couple posing and posturing to humorous effect. Foreplay also figures in Tamara McLorg's satisfying Fair Play during which the choreographer sets lyrical patterns both to and against cheery music by Bach.

EMMA is the youngest professional dance group in the country, and it is remarkable how much has been accomplished in its few months of existence. Already Avrahami has forged a strong, unified ensemble with a desire to communicate that enlivens even the dreariest of settings. One performer missed the London debut because of an injury, but the surviving foursome compensated for his absence with impressive attack and sparkle.

The dancers are well trained and seem to enjoy their educational activities as much as they do the overly strenuous programmes. Once Avrahami has added another company member and a few more works EM MA will set a shining example of how knowledge about the liveliest art form can be disseminated to even out-of-the-way places. Let us hope that other regional arts associations are taking note of East Midlands' initiative.