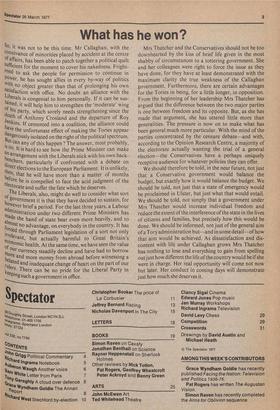 What has he won?

So, it was not to be this time. Mr Callaghan, with the connivance of minorities placed by accident at the centre Of affairs, has been able to patch together a political quilt sufficient for the moment to cover his nakedness.Frightened to ask the people for permission to continue in wer, he has sought allies in every by-way of politics With no object greater than that of prolonging his own satisfaction with office. No doubt an alliance with the Liberals is congenial to him personally. If it can be sustained, it will help him to strengthen the 'moderate' wing of his party, which sorely needs strengthening since the death of Anthony Crosland and the departure of Roy j enkins. If cemented into a coalition, the alliance could have the unfortunate effect of making the Tories appear u_angerously isolated on the right of the political spectrum. ,bitit can any of this happen ? The answer, most probably, is no It is hard to see how the Prime Minister can make an arrangement with the Liberals stick with his own back b ,lichers, particularly if confronted with a debate on direct elections to the European Parliament. t is unlikely, len, that he will have more than a matter of months before he is compelled to face the acid judgment of the electorate and suffer the fate which he deserves. The Liberals, also, might do well to consider what sort Ofgovernment it is that they have decided to sustain, for ,.,however brief a period. For the last three years, a Labour clununistration under two different Prime Ministers has rniade the hand of state bear even more heavily, and to almost no advantage, on everybody in the country. It has forced through Parliament legislation of a sort not only Irrelevant but actually harmful to Great Britain's economic health. At the same time, we have seen the value r Our currency steadily decline and have had to borrow more ?re and more money from abroad before witnessing a belated and inadequate change of heart on the part of our rulers. There can be no pride for the Liberal Party in k '.ePing such a government in office. Mrs Thatcher and the Conservatives should not be too downhearted by the kiss of brief life given in the most shabby of circumstances to a tottering government. She and her colleagues were right to force the issue as they have done, for they have at least demonstrated with the maximum clarity the true weakness of the Callaghan government. Furthermore, there are certain advantages for the Tories in being, for a little longer, in opposition. From the beginning of her leadership Mrs Thatcher has argued that the difference between the two major parties is one between freedom and its opposite. But, as she has made that argument, she has uttered little more than generalities. The pressure is now on to make what has been general much more particular. With the mind of the parties concentrated by the censure debate—and with, according to the Opinion Research Centre, a majority of the electorate actually wanting the trial of a general election—the Conservatives have a perhaps uniquely receptive audience for whatever policies they can offer.

We should therefore be told, in the near future, not just that a Conservative government would balance the budget, but exactly how it would balance the budget. We should be told, not just that a state of emergency would be proclaimed in Ulster, but just what that would entail. We should be told, not simply that a government under Mrs Thatcher would increase individual freedom and reduce the extent of the interference of the state in the lives of citizens and families, but precisely how this would be done. We should be informed, not just of the general aim of a Tory administration but—and in some detail—of how that aim would be achieved. As dissatisfaction and discontent with life under Callaghan grows Mrs Thatcher has nothing to lose and everything to gain from spelling out just how different the life of the country would be if she were in charge. Her real opportunity will come not now but later. Her conduct in coming days will demonstrate just how much she deserves it.