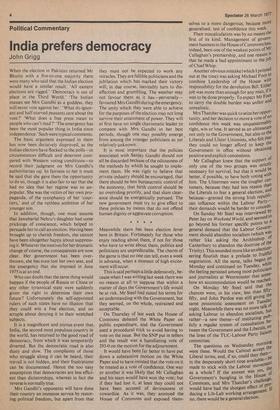 When the election in Pakistan returned Mr Bhutto with a five-to-one majority there were many who said that the Indian election would have a similar result. 'All eastern elections are rigged.' Democracy is out of place in the Third World.' The Indian masses see Mrs Gandhi as a goddess, they will never vote against her.' What do ignorant and half-starved peasants care about the vote ?"What does a free press mean to people who can't read ?The emergency has been the most popular thing in India since independence.' Such were typical comments.

The basic argument expressed in them has now been decisively disproved, as the Indian electors have flocked to the polls—in circumstances difficult and deterrent compared with Western voting conditions—to record their judgment on Mrs Gandhi's authoritarian raj. In fairness to her it must be said that she gave them the opportunity to do so, though it is also fair to say that she had no idea that her regime was so unpopular. She was the victim of her own propaganda, of the sycophancy of her 'courtiers,' and of the ruthless ambition of her younger son.

In addition, though, one must assume that Jawaharlal Nehru's daughter had some prickings of conscience, which helped to persuade her to call an election. Having been brought up to cherish freedom, she cannot have been altogether happy about suppressing it. Whatever the motives for her dramatic change of course, the consequences are now clear. Her government has been overthrown, she has even lost her own seat, and the emergency that she imposed in June 1975 is at an end.

Who can doubt that the same thing would happen if the people of Russia or China or any other tyrannical state were suddenly given the right to determine their own future? Unfortunately the self-appointed rulers of such states have no illusion that they could win a free election, and no scruple about denying it to their wretched subjects.

It is a magnificent and joyous event that India, the second most populous country in the world, has returned to the good road of democracy, from which it was temporarily diverted. But the democratic road is also dusty and slow, The complaints of those who struggle along it can be heard, their travail is not hidden, and their frustrations' can be documented. Hence the too easy assumption that democracies are less efficient than dictatorships, whereas in fact the reverse is normally true.

Mrs Gandhi's opponents will have done their country an immense service by restoring political freedom, but apart from that they must not be expected to work any miracles. They are fallible politicians and the jubilation which has marked their victory will, in due course, inevitably turn to disaffection and grumbling. The weather may not favour them as it has—perverselyfavoured Mrs Gandhi during the emergency. The unity which they were able to achieve for the purposes of the election may not long survive their attainment of power. They will at first have no single charismatic leader .to compare with Mrs Gandhi in her best periods, though one may possibly emerge from among the Younger politicians as yet relatively unknown.

It is most important that the policies associated with Sanjay Gandhi should not all be discarded because of the odiousness of the methods by which he sought to implement them. He was right to believe that private industry should be encouraged, that there should be less bureaucratic control of the economy, that birth control should be an overriding priority, and that slum clearance should be energetically pursued. The new government must try to give effect to these policies by means that do not offend human dignity or aggravate corruption.

Meanwhile there has been election fever here in Britain. Fortunately for those who enjoy reading about them, if not for those who have to write about them, politics and politicians are unpredictable. The charm of the game is that no one can tell, even a week in advance, when a moment of high excitement will occur.

This is said perhaps a little defensively, because when I was writing last week there was no reason at all to suppose that within a matter of days the Government's life would be at risk. Mr Steel had stated his terms for an understanding with the Government, but they seemed, on the whole, restrained and acceptable.

On Thursday of last week the House of Commons debated the White Paper on public expenditure, and the Government used a procedural trick to avoid having to vote on the issue. But the SNP put in tellers and the result was a humiliating yote of 293-0 on the motion for the adjournment.

It would have been far better to have put down a substantive motion on the White Paper and to have insisted that the vote on it be treated as a vote of confidence. One way or another it was likely that Mr Callaghan and his team would have won the vote; but if they had lost it, at least they could not have been accused of deviousness or cowardice. As it was, they annoyed the House of Commons and exposed them; selves to a more dangerous, because more generalised, test of confidence this week.

Their miscalculation was by no means the first of its kind. Management of government business in the House of Commons has, indeed, been one of the weakest points of Mr Callaghan's 'premiership, and one reason is that he made a bad appointment to the job of Chief Whip.

Another obvious mistake (which I pointed out at the time) was asking Michael Foot to combine Leadership of the House with responsibility for the devolution Bill. Either job was more than enough for any man, if it was to be done properly. To expect Mr Foot to carry the double burden was unfair and unrealistic.

Mrs Thatcher was quick to seize her °PIO' t unity, and her decision to move a vote of it° confidence this week was unquestionablY right, win or lose. It served as an ultimatum not only to the Government, but also to the Liberals and Ulster Unionists, who felt that they could no longer afford to keep the Government in office without obtaining positive and explicit concessions. Mr Callaghan knew that the support of only one of the two groups was strictlY necessary for survival, but that it would be better, if possible, to have both voting with him. The Ulstermen were the tougher customers, because they, had less reason than the Liberals to fear a general election, and because—granted the strong Irish republic can influence within the Labour Party-their demands would be harder to concede' On Sunday Mr Steel was interviewed hY Peter Jay on Weekend World, and seemed t° go beyond his former specific points to a general demand that the Labour Government should abandon socialism (which was, rather like asking the Archbishop °I Canterbury to abandon the doctrine of the Trinity). This sounded more like an election' eering flourish than a prelude to fruitful negotiation. All the same, talks began on Monday and continued on Tuesday, while the feeling persisted among most politicians and journalists at Westminster that sortie° how an accommodation would be reached. On Monday Mr Steel said that the chances were, in his view, less than fiftYfifty, and John Pardoe was still giving the same' pessimistic assessment on TtlesdaYf night. Meanwhile there was no more talk ot asking Labour to abandon socialism, hn rather—a new theme—of instituting Pub. licly a regular system ,of consultation be" tween the Government and the Liberals, on cthoemlminietsteoe.f the TUC-Labour PartY liaiSOO The questions on Wednesday m were these. Would the Cabinet accept th Liberal terms, and, if so, could they then-in the desperately short time available—. made to stick with the Labour movente; as a whole? If the answer was Yes, t 01 orninge Government's bungling in the House Commons, and Mrs Thatcher's challeng", would have had the shotgun effect of 171.'4 ducing a Lib-Lab working arrangetnent. no, there would be a general election.