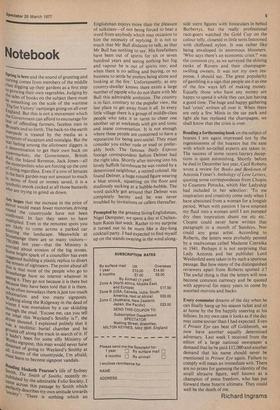 """•••••-,..Spring is here and the sound of grunting and cursing comes from members of the middle class digging up their gardens as a first step l° growing their own vegetables. Judging by the sales of books on the subject there must ,1),e_something on the scale of the wartime r.ulg for Victory' campaign going on all over cngland. But this is not a movement which the Government can afford to encourage for fear of offending farmers, faceless men in Brussels and so forth. The back-to-the-earth stampede is treated by the media as a sYmptom of escapism and nostalgia. But the real feeling among the allotment diggers is • d determination to get their own back on supermarkets, the Government, British Rail, the Inland Revenue, Jack Jones—all the „ monopolists who are forcing up the cost !)I living regardless. Even if a row of lettuces !n the back garden may not amount to much In terms of food or money saved, it is a sYMbolic snook cocked at all those bastards Who are trying to grind us down.

Any hopes that the increase in the price of petrol would mean fewer motorists driving round the countryside have not been Confirmed. In fact they seem to have Even in the remotest spots you `re likely to come across a parked car Q 71l°tting the landscape. Meanwhile at °0fli.Lhenge there are so many visitors— ,‘'w last year—that the Ministry is orried about erosion of the big stones. c■trie bright spark of a councillor has even ,suggested building a plastic replica to divert _the stream of sightseers. The point about all Ihts is that most of the people who go to tonehenge have no interest whatever in sk_eeing it. They go not because it is there but ueA cause they have been told that it is there. SO often nowadays there is just too much rrmation and too many signposts. walking along the Ridgeway in the dead of thinter I was overtaken by a car skidding ,rough the mud. 'Excuse me, can you tell cTe What this Wayland's Smithy is?', the river shouted. I explained politely that it Was a neolithic burial chamber and he iIrclund off along the track in search of it. If _ hadn't been for some silly Ministry of orks signpost, this man would never have !earned of going to Wayland's Smithy at Lovers of the countryside, afraid: Must learn to become signpost vandals.

itc eading Hesketh Pearson's life of Sydney 111ith, The Stnith of Smiths, recently rePublished by the admirable Folio Society, I harne across this passage by Smith which ."errectly describes my own attitude towards society': 'There is nothing which an Englishman enjoys more than the pleasure of sulkiness—of not being forced to hear a word from anybody which may occasion to him the necessity of replying. It is not so much that Mr Bull disdains to talk, as that Mr Bull has nothing to say. His forefathers have been out of spirits for six or seven hundred years and seeing nothing but fog and vapour he is out of spirits too; and when there is no selling and buying. or no business to settle he prefers being alone and looking at the fire.' Unfortunately, as any country-dweller knows there exists a large number of people who do not share with Mr Bull this admirable ambition. The country is in fact, contrary to the popular view, the last place to get away from it all. In every little village there is a group of middle-class people who take it in turns to cheer one another up at weekends with gin and tonic and inane conversation. It is not enough where these people are concerned to have a reputation for being anti-social. They must consider you either rude or mad or preferably both. The famous Daily Express foreign correspondent Sefton Delmer had the right idea. Shortly after moving into his lovely Suffolk farmhouse he was visited by a determined neighbour, a retired colonel. He found Delmer, a huge rotund figure wearing a blue smock, squatting on the floor and studiously sucking at a hubble-bubble. The word quickly got around that Delmer was completely barmy and he was never troubled by invitations or callers thereafter.

Prompted by the greatest living Englishman, Nigel Dempster, we spent a day at Cheltenham Races last week. Rather to my surprise it turned out to be more like a day-long cocktail party. I had expected to find myself up on the stands swaying in the wind along side stern figures with binoculars in belted Burberrys, but the really professional race-goers watched the Gold Cup on the colour telly, closeted in little tents festooned with chiffoned nylon. It was rather like being enveloped in enormous bloomers. 'Who says there's an economic crisis ?' was the common cry, as we surveyed the shining ranks of Rovers and their champagneswilling owners. It was not my own response, I should say. The great popularity of gambling is a sign that people see it as one of the few ways left of making money. Equally those who have any money are happy to spend it while they can just having a good time. The huge and happy gathering had 'crisis' written all over it. When there are only a few Minis in the car park and light ale has replaced the champagne, we shall know that the crisis is over.

Reading a forthcoming book on the subject of hoaxes I am again impressed not by the ingeniousness of the hoaxers but the ease with which so-called experts are taken in. The success of some recent literary deceptions is quite astonishing. Shortly before he died in December last year, Cecil Roberts wrote a review for Books and Book men of Antonia Fraser's Anthology of Love Letters, quoting some correspondence from Chopin to Countess Potocka, which Her Ladyship had included in her selection: `To me inspiration and creativity come only when I have abstained from a woman for a longish period. When with passion I have emptied my fluid into a woman until I am pumped dry then inspiration shuns me etc etc.' Chopin could never have written that paragraph in a month of Sundays. Nor could any great artist. According to Roberts, the letters were probably penned by a madwoman called Madame Czernika in 1941. Perhaps it is not surprising that Lady Antonia and her publisher Lord Weidenfeld were taken in by such a spurious passage. But how many of the distinguished reviewers apart from Roberts spotted it ? The awful thing is that the letters will now become common currency and be quoted with approval for many years to come by assorted morons and hacks.

Every commuter dreams of the day when he can finally hang up his season ticket and sit at home by the fire happily sneering at his fellows. In my own case it looks as if the day may come sooner than I had expected. Even if Private Eye can beat off Goldsmith, we now have another equally determined adversary. Last week I received from the editor of a large national newspaper a demand that he be paid £12,000 and another demand that his name should never be mentioned in Private Eye again. Failure to comply will mean an immediate writ. There are no prizes for guessing the identity of the small abrasive figure, well known as a champion of press freedom, who has put forward these bizarre ultimata. They could well be the death. of me.