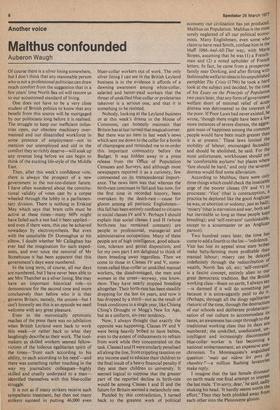 Of course there is a silver lining somewhere, but I don't think that any reasonable person who is not a professional politician can draw much comfort from the suggestion that in a few years' time North Sea oil will restore us to our accustomed standard of living.

One does not have to be a very close student of British politics to know that any benefit from this source will be mortgaged by our politicians long before it is realised. The struggle to keep our inefficient industries open, our obsolete machinery overmanned and our dissatisfied workforce in some pretence of employment—not to mention our unemployed and old in the comfort they so richly deserve—will soak up any revenue long before we can begin to think of the exciting life-style of the Middle East.

Then, after this week's confidence vote, there is always the prospect of a new government in the not-too-distant future. I have often wondered about the constitutional validity of votes cast by a corpse wheeled through the lobby in a parliamentary division. There is nothing in Erskine May which says that brain cells must be active at these times—many MPs might have failed such a test had it been applied— and even if there were, this can be achieved nowadays by electrosynthesis. But even with the unsuitable Dr Donoughue at his elbow, I doubt whether Mr Callaghan has ever had the imagination for such expedients, and ever since the removal of Mr Stonehouse it has been apparent that this government's days were numbered.

In the long term, of course, all our days are numbered, but I have never been able to see Mrs Thatcher as a silver lining. She may have an important historical role—to demonstrate for the second time and more conclusively than before who it is that governs Britain, namely, the unions—but I can't honestly see this is an episode we need welcome with any great pleasure.

Even in the moronically optimistic reaches of the press there was no jubilation when British Leyland went back to work this week—or rather back to what they laughingly describe as their work. The toolmakers as skilled workers seemed fellowvictims of the hideous egalitarian spirit of the times—'from each according to his ability, to each according to his need'—and there was something rather touching in the way my journalistic colleagues—highly skilled and cruelly underpaid to a man— identified themselves with this blue-collar struggle.

bluer-collar workers out of work, The only silver lining I can see in the British Leyland business is in the evidence it affords of a dawning awareness among white-collar, salaried and better-paid workers that the threat of unskilled blue-collar or proletarian takeover is a serious one, and that it is something to be resisted.

Nobody, looking at the Leyland business or at this week's drama in the House of Commons, can honestly maintain that Britain has at last turned that magical corner. But there was an item in last week's news which sent me down to the cellar for a bottle of champagne and reminded me to re-order this important commodity before the Budget. It was hidden away in a press release from the 'Office of Population Censuses and Surveys, and although most newspapers reported it as a curiosity, few commented on its transcendental importance. The news item was that whereas the birth-rate continues to fall and has now, for the first time in recorded history, been overtaken by the death-rate—cause for gloom among all patriotic Englishmen— this fall has been entirely confined to citizens in social classes IV and V. Perhaps I should explain that social classes I and II (whose birth-rate has remained constant) are people in professional, managerial and administrative occupations. Many of these people are of high intelligence, good education, tolerant and genial disposition, and for my own part I am delighted to think of them breeding away regardless. Then we come to those in Classes IV and V, sometimes called blue-collar or unskilled manual workers, the disadvantaged, the men and women in the street—anyway, you know, them. They have nearly stopped breeding altogether. Their birth-rate has been steadily dropping for the last six years, and now it has dropped by a third—not as the result of freak conditions in a single year, like Chiang Ching's Drought or Mogg's New Ice Age, but as a uniform, six-year tendency.

Now, I always thought that exactly the opposite was happening. Classes IV and V were being heavily bribed to have babies, even to the extent of inducements to refrain from work while they concentrated on .the task. Classes I and II were similarly penalised all along the line, from crippling taxation on any income used to educate their children to the final insult of a heavy financial penalty if they sent their children to university. It seemed logical to .suppose that the greater part of the reported decline in birth-rate would be among Classes I and II and the future for Britain seemed a melancholy one.

Puzzled by this contradiction, I turned back to the greatest work of political economy our civilisation has yet produced, Malthus on Population. Malthus is the most sorely neglected of all our political economists. Many Englishmen, even some who claim to have read Smith, confuse him in the bluff 1066-And-All-That way, with Marie Slopes, assuming that he was (1) a Frenchman and (2) a noted upholder of French letters. In fact, he came from a prosperous family near Dorking, and after flirting with fashionable welfarist ideas in his unpublished pamphlet The Crisis (1796) he took a hard look at the subject and decided, by the time of his Essay on the Principle of Population two years later, that any form of government welfare short of minimal relief of acute distress was detrimental to the interests of the poor. If Poor Laws had never existed, he wrote, 'though there might have been a few more instances of severe distress, the aggregate mass of happiness among the common , people would have been much greater than it is at present.' These laws limited the mobility of labour, encouraged fecunditY and should be abolished, he said. For the most unfortunate, workhouses should not be 'comfortable asylums' but places where 'fare should be hard,' and only the severest distress would find some alleviation.

According to Malthus, there were onlY three things which could check the insatiable urge of the poorer classes (IV and V) t° procreate: 'Vice' (that is contraception, a practice he deplored like the good Anglieari he was, or abortion or sodomy, just as bad); 'misery' (that is starvation and war, both sad but inevitable so long as these people kept breeding); and 'self-restraint' (unthinkable, except to a scoutmaster or an Anglican parson). Two hundred years later, the time has. come to add a fourth to the list—Indolence. Vice has lost its appeal since state bribes make baby-farming more profitable manual labour; misery can be delayed indefinitely through the redistribution of wealth, North Sea oil, etc; 'self-restraint' is a fascist concept, entirely alien to our great democratic tradition. But the British working class—finest on earth, I always saY —is damned if it will do something .idst because it is extravagantly paid to do it. (Perhaps, through all the dingy egalitarian rhetoric of the time, through the destruction of our schools and deliberate proletarianisation of our culture to accommodate its tastes, an awareness has crept through to the traditional working class that its days are numbered; the unskilled, uneducated, ufl-. intelligent and increasingly discontented blue-collar worker is fast becoming a national embarrassment, an expensive ana-. chronism. To Montesquieu's anguished question: `rnais qui videra les pots de chambre ?'—a million flushing lavatories make reply. I imagine that the last female dinosaurt on earth made one final attempt to inter the last male. 'I'm sorry, dear,' he said, a shaking his head. 'It hardly seems worth the effort.' Then they both plodded away from each other into the Pleistocene gloom.