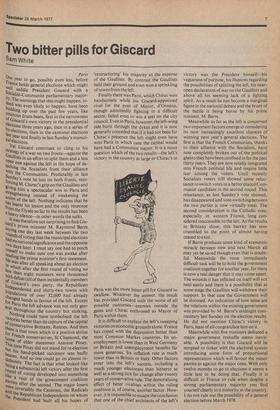 Paris C)ne year to go, possibly even less, before France holds general elections which might well saddle President Giscard with a 4Ocialist-Communist parliamentary majority. The warnings that this might happen, ind, eed was even likely to happen, have been building up over the past few years, like ominous drum beats, first in the narrowness Of Giscard's own victory in the presidential elections three years ago, then in a series of ,hY-elections, then in the cantonal elections last Year and finally in last Sunday's municiPal elections. Yet Giscard continues to cling to his strategy of a war on two fronts—against the Gaullists in an effort to split them and a less °Pe n one against the left in the hope of detaching the Socialists from their alliance with the Communists. Predictably in last Sundays vote he lost on both fronts, reinforcing M. Chirac's grip on the Gaullists and 6"Ing him a spectacular win in Paris and strengthening instead of weakening the 11,.nicon of the left. Nothing indicates that he from learnt his lesson and the only response Ironl the Elysie so far to the results has been a heavy silence—in other words the sulks. It was therefore not surprising to find Giscard's prime minister M. Raymond Barre saYing one day last week between the two rounds of voting that the municipal elections ,nad no national significance and the opposite "v0 days later. I must say one had to pinch oneself to make sure one was awake after 'beading the prime minister's first statement. ,(le was after all speaking about an election ifl Which after the first round of voting no Less than eight ministers were threatened +vith defeat (allof them incidentally members or Giscard's own party, the Republican Independents) and thirty-two towns with Populations of over 32,000 had already h a n EXkl hands in favour of the left. Except

for Paris the left advance was not only general throughout the country but striking. v. Nothing could have symbolised the left

ictories better than its capture of the capital °_leonservative Brittany, Rennes. And then there is that town which is a positive shrine !or French conservatives, St Chamond, the home of elder statesman Antoine Pinay. ins time Pinay did not stand for re-election but his hand-picked successor was badly beaten. And so one could go on almost indefinitely The fact is that what looked like being a substantial left victory after the first 1,0und of voting developed into something Ike a rout of the government coalition Parties after the second. The major losers w_ ere invariably the Centrists, the Radicals and the Republican Independents on whom the President had built all his hopes of

'restructuring' his majority at the expense of the Gaullists. By contrast the Gaullists held their ground and even won a sprinkling of towns from the left.

Finally there was Paris, which Chirac won handsomely while his Giscard-appointed rival for the post of Mayor, d'Ornan9, though admittedly fighting in a difficult sector, failed even to win a seat on the city council. Even in Par-is, however, the left-wing tide burst through the dykes and it is now generally conceded that if it had not been for Chirac's presence the left might even have won Paris in which case the capital would have had a Communist mayor. It is a moot question which of the two results--the left's victory in the country at large or Chirac's in

Paris was the more bitter pill for Giscard to swallow. Whatever the answer, the result has provided Giscard with the worst of all possible outcomes—enemies outside the gates and Chirac enthroned as Mayor of Paris within them.

It is difficult to explain the left's sweeping victories on economic grounds alone. France has coped with the depression better than most Common Market countries. Its unemployment is lower than in West Germany or Britain and unemployment benefits far more generous. Its inflation rate is much lower than in Britain or Italy. Other factors enter into the left's success, including a much younger electorate than hitherto as well as a strong itch for change after twenty years of conservative rule. The demoralising effect of bitter rivalries within the ruling coalition is, of course, another factor. However, it is impossible to escape the conclusion that one of the chief architects of the left's victory was the President himself—his vagueness of purpose, his illusions regarding the possibilities of splitting the left, his nearopen declaration of war on the Gaullists and above all his seeming lack of a fighting spirit. As a result he has become a marginal figure in the national debate and the brunt of the battle is being borne by his prime minister, M. Barre.

Meanwhile as far as the left is concerned two important factors emerge in considering its now increasingly excellent chances of winning next year's general elections. The first is that the French Communists, thanks to their alliance with the Socialists, have now completely broken out of the political ghetto they have been confined in for the past thirty years. They are now totally integrated into French political life and inspire little fear among the voters. Until recently Socialists voters still showed some reluctance to switch votes to a better placed Communist candidate in the second round. This reluctance, as last Sunday's vote showed, has disappeared and vote-switching between the two parties is now virtually total. The second consideration is the Catholic vote, especially in western France, long considered inaccessible to the lett. As the results in Brittany show, this barrier has now crumbled to the point of almost having ceased to exist.

If Barre produces some kind of economic miracle between now and next March all may yet be saved though even that is doubtful. Meanwhile the most immediately difficult task will be to hold the government coalition together for another year, for there is now a real danger that it may come apart. The wounds it has inflicted on itself will not heal easily and there is a possibility that at some stage the Gaullists will withdraw their support. In that case the Government will be doomed. An indication of how tense are the relations within the existing government was provided by M. Barre's midnight commentary last Sunday on the election results. He did not mention Chirac's victory in Paris, least of all congratulate him on it.

Meanwhile with five ministers defeated a major government reshuffle seems inevit able. A possibility is that Giscard will be tempted to tinker with the electoral system ' introducing some form of proportional representation which will favour the minor parties as against the major ones. With only twelve months to go to elections it seems a little late to be doing that. Finally it is difficult in France to rule when despite a strong parliamentary majority you find yourself clearly in a minority in the country. I do not rule out the possibility of a general election before March 1978.