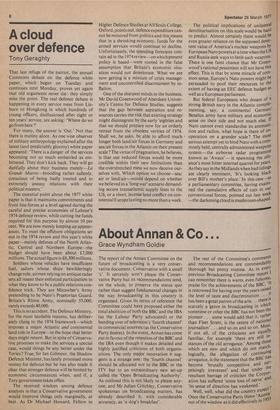 A cloud over defence

That last refuge of the patriot, the annual Commons debate on the defence white paper, which' began on Tuesday and continues next Monday, proves yet again that old arguments never die: they simply miss the point. The real defence debate is happening in every service mess from Lisburn to Hongkong in which hundreds of young officers, disillusioned after eight or ten years' service, are asking: 'Where do we go from here ?'

For many, the answer is 'Out.' Not that there is mutiny afoot. As one wise observer of military anthropology explained after the latest (and predictably gloomy) white paper appeared: 'There is a danger of the services becoming not so much embattled as embittered. They don't kick back. They will go dutifully about their business mutely—La Grande Muette—brooding rather sullenly, conscious of being badly treated and in extremely uneasy relations with their political masters.'

The essential point about the 1977 white paper is that it maintains commitments and front line forces at a level agreed during the careful and precise economies of Labour's 1974 defence review, while cutting the funds required for this purpose by almost 10 per cent. We are now merely keeping up appearances. To meet the offshore obligations set out in the 1974 review and this year's white paper—mainly defence of the North Atlantic, Central and Northern Europe—the budget should have been about 0,000 millions. The actual figure is £6,300 millions.

Soldiers whose vehicles have insufficient fuel, sailors whose ships bewilderingly change role, airmen relying on antique radar sets all resent their enfor'ced participation in what they know to be a public relations confidence trick. They are Micawber's Army pretending to be Nato's Praetorian Guard. Britain's Rhine Army, nominally 55,000, rarely exceeds 40,000.

This is no accident. The Defence Ministry, for the most laudable reasons, has deliberately clung to the 1974 framework—which imposes a major Atlantic and continental land role in Europe—in the hope that better days might return. But in spite of Conservative promises to make the services a special case, would things be any better under the Tories ? True, Sir Ian Gilmour, the Shadow Defence Minister, has lately promised more money for defence but he has also made it clear that stronger defence will be limited by economic circumstances when, and if, a Tory government takes office.

The received wisdom among defence analysts is that a Conservative government would improve things only marginally, at best. As Dr Michael Howard, Fellow in Higher Defence Studies at All Souls College, Oxford, points out, defence expenditure cannot be removed from politics and this means that in a shrinking economy, funds for the armed services would continue to decline. Unfortunately, the spending forecasts contain ed in the 1974 review—on which present policy is based—were rooted in the false assumption that Britain's economic situation would not deteriorate. What we are now getting is a mixture of crisis management and uncontrolled disarmament by inflation.

One of the sharpest minds in the business, Mr David Greenwood of Aberdeen University's Centre for Defence Studies, suggests that the gap between aspiration and resources carries the risk that existing strategy might disintegrate by the early 'eighties and that we should prepare now for an orderly retreat from the obsolete verities of 1974. Shall we, he asks, be able to afford much longer both land/air forces in Germany and sea/air forces in the Atlantic on their present scale ? The virtue of pragmatism, he believes, is that our reduced forces would be more credible within their new limitations than the overstretched mess we now deceive ourselves with. Which option we choose—sea/ air or land/air—would depend on whether we believed in a 'long war' scenario demanding secure transatlantic supply lines to the US, or a short, incense land conflict on continental Europe lasting no more than a week.

The political implications of unilateral demilitarisation on this scale would be hard to predict. Almost certainly there would be even greater reliance on the supposed deterrent value of America's nuclear weapons bY European Nato powers at a time when the US and Russia seek ways to limit such weapons. There is one faint chance that Mr Greenwood's rational pessimism will not have this effect. This is that by some miracle of cora' mon sense, Europe's Nato powers might be persuaded to pool their resources to the extent of having an EEC defence budget as well as a European parliament.

But federal Europeans who dream of a strong British navy in the Atlantic complementing; say, a continental Gerrnani Benelux army have military and economic, sense on their side and not much else. 11 Nato cannot even standardise its ammunition and radios, what hope is there of cooperation on a grander scale ? The most serious attempt yet to bind Nato with a commanly held, centrally administered weapons system—the airborne radar programme known as `Awacs' — is spawning the alliance's most bitter internal quarrel for years. As they say in the Midlands when bad tidings are clearly imminent, 'It's looking black over Bill's mother's place.' In this case—as a parliamentary committee, having examined the cumulative effects of cuts in our conventional forces, pointed out last week —the darkening cloud is mushroom-shaped,