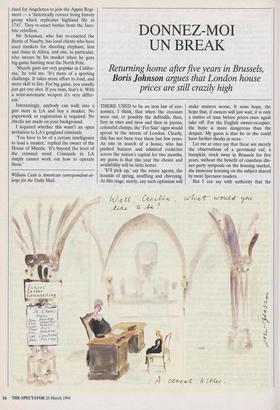 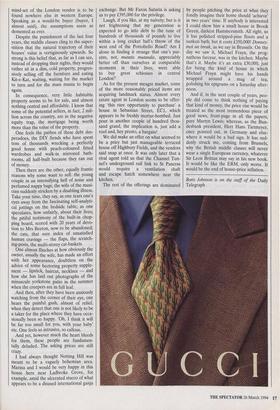 THERE USED to be an iron law of eco- nomics, I think, that when the crocuses were out, or possibly the daffodils, then, first in ones and twos and then in joyous, colourful clumps, the 'For Sale' signs would sprout in the streets of London. Clearly, this has not been true these last few years. As one in search of a house, who has pushed buzzers and admired rockeries across the nation's capital for two months, my guess is that this year the choice and availability will be little better.

'It'll pick up,' say the estate agents, the hounds of spring, snuffling and chivvying. At this stage, surely, any such optimism will make matters worse. It sows hope, the hope that, if owners will just wait, it is only a matter of time before prices once again take off. For the English owner-occupier, the hope is more dangerous than the despair. My guess is that he or she could have further shocks in store.

Let me at once say that these are merely the observations of a provincial oaf, a bumpkin, stuck away in Brussels for five years, without the benefit of countless din- ner-party symposia on the housing market, the immense learning on the subject shared by most Spectator readers.

But I can say with authority that the mind-set of the London vendor is to be found nowhere else in western Europe. Speaking as a would-be buyer (buyor, I almost said), the assumptions seem as demented as ever.

Despite the punishment of the last four years, the middle classes cling to the super- stition that the natural trajectory of their houses' value is vertiginously upwards. So strong is this belief that, as far as I can see, instead of dropping their sights, they would rather sit in a dim, cold property, progres- sively selling off the furniture and eating Kit-e-Kat, waiting, waiting for the market to turn and for the mass mania to begin again. In consequence, very little habitable property seems to be for sale, and almost nothing central and affordable. I know that some of the potential sellers, in fact, 2 mil- lion across the country, are in the negative equity trap, the mortgage being worth more than the value of the property.

One feels the pathos of these debt des- peradoes, the DIY fiends who have spent tens of thousands wrecking a perfectly good house with peach-coloured fitted wardrobes and walk-in mirrored bath- rooms, all half-built because they ran out of money. Then there are the other, equally frantic reasons why some want to sell: the young couple in an intensifying hell of noise and perfumed nappy bags; the wife of the musi- cian suddenly stricken by a disabling illness. Take your time, they say, as one tears one's eyes away from the fascinating self-analyti- cal jottings on the bedside table; as one speculates, how unfairly, about their lives; the pitiful testimony of the built-in chop- ping board, scored with 20 years of devo- tion to Mrs Beeton, now to be abandoned; the cats, that sure index of unsatisfied human cravings — the flaps, the scratch- ing-posts, the multi-storey cat-baskets. One almost flinches at how obviously the owner, usually the wife, has made an effort with her appearance, doubtless on the advice of some hectoring property supple- ment — lipstick, haircut, necklace — and how she has laid out photographs of the minuscule yorkstone patio in the summer when the creepers are in full leaf.

And then, after they have been anxiously watching from the corner of their eye, one hears the painful gush, almost of relief, when they detect that one is not likely to be a taker for the place where they have occa- sionally been so happy. 'Oh, I think it will be far too small for you, with your baby' etc. One feels so intrusive, so callous.

And yet, however much the heart bleeds for them, these people are fundamen- tally deluded. The asking prices are still crazy.

I had always thought Notting Hill was meant to be a vaguely bohemian area. Marina and I would be very happy in this house here near Ladbroke Grove, for example, amid the ulcerated stucco of what appears to be a disused international ganja exchange. But Mr Faron Sutaria is asking us to pay £395,000 for the privilege.

Laugh, if you like, at my navety; but is it not frightening that my generation is expected to go into debt to the tune of hundreds of thousands of pounds to live within a long cricket ball's throw of the west end of the Portobello Road? Am I alone in finding it strange that one's par- ents, not, mutatis mutandis, appreciably better off than ourselves at comparable moments in their lives, were able to buy great schlosses in central London?

As for the present meagre market, some of the more reasonably priced items are acquiring landmark status. Almost every estate agent in London seems to be offer- ing 'this rare opportunity to purchase' a house in Sebastian Street, Ed, which appears to be freshly mortar-bombed. Just pour in another couple of hundred thou- sand grand, the implication is, just add a roof and, hey presto, a bargain!

We did make an offer on what seemed to be a pricy but just manageable terraced house off Highbury Fields, and the vendors said snap at once. It was only later that a rival agent told us that the Channel Tun- nel's underground rail link to St Pancras would require a ventilation shaft and escape hatch somewhere near the kitchen.

The rest of the offerings are dominated by people pitching the price at what they fondly imagine their home should 'achieve' in two years' time. If anybody is interested I could show him a small house in Brook Green, darkest Hammersmith. All right, so it has polished stripped-pine floors and a sunken bath; but it costs £350,000! Donnez- moi un break, as we say in Brussels. On the day we saw it, Michael Frayn, the prog- nathous farceur, was in the kitchen. Maybe that's it. Maybe it's an extra £30,000, just for being the kind of house in which Michael Frayn might have his hands wrapped around a mug of tea, polishing his epigrams on a Saturday after- noon.

And if, in the next couple of years, peo- ple did come to think nothing of paying that kind of money, the price rise would be treated as the most tremendous piece of good news, front-page in all the papers, pure Martyn Lewis; whereas, as the Bun- desbank president, Herr Hans Tietmeyer, once pointed out, in Germany and else- where it would be a bad sign. It has sud- denly struck me, coming from Brussels, why the British middle classes will never wear a single European currency, whatever Sir Leon Brittan may say in his new book. It would be like the ERM, only worse. It would be the end of house-price inflation.

Boris Johnson is on the staff of the Daily Telegraph