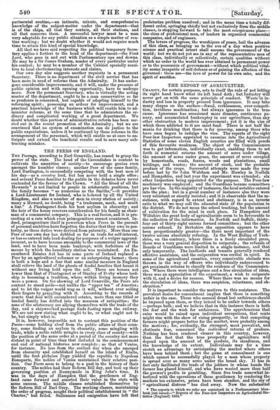 THE PEERS OF ENGLAND.

THE Peerage, according to Earl Granville, has ceased to grasp the power of the state. The head of the Cavendiahes is content to cultivate the amenities of society—to encourage genius even amongst the humbler classes ; another Peer of the same family, Lord Burlington, is successfully competing with the best men of his day—as a country lord, but has never held a single office; and several Peers familiar to the public in the debates have never contended for the favour of the Crown. "All the blood of all the Ho wards" is not limited to people in aristocratic positions, but the family becomes " as numerous as the Smiths,"—it provides a Lord-Lieutenant for Ireland, who is beloved by all the United Kingdom, and also a number of men in every-station of society; many a Howard, no doubt, being "a tradesman, meek, and much a liar." A Plantagenet finds his best asylum in obscurity ; and the heir of the house recovers consideration for his family as chair- man of a commercial company. This is a real fusion, and it is pro- ceeding at a rate which even primogeniture cannot counteract. In- deed, primogeniture itself is powerless when Peers in the pursuit of personal ambition have forgotten the duties that they owe to pos- terity, as those duties were derived from paternity. More than one Peer of our own day has dabbled so far in trade for self-interest, or has so entered into land-dealing for purposes of a vulgar aggrand- izement, as to have become amenable to the commercial laws of the land, and to have been made bankrupt, with forfeiture of the means by which the hereditary station was maintained. An En- cumbered. Estates Act has in some parts of Ireland replaced a Peer by an agricultural reformer or an enterprising farmer ; there is both a hope and a fear that some similar measure in England shall relieve the land of the ghosts of feudal families that haunt it without any living hold upon the soil. There are houses not lower than that of Plantagenet or of Stanley of Derby whose lord- ship is becoming a tradition, where within living memory they were a power. On the showing of Lord Granville, the Peers are content to stand aside—not unlike the " upper ten " of America; and to let the vulgar world wag as it will, without ever soiling their fingers by grappling with it. According to the records of courts that deal with encumbered estates, more than one titled or landed family has drifted into the museum of antiquities ; the sons of the aristocracy are allying themselves with the trade of the day, and a shipwrecked peerage finds footing upon the railway. We are not now stating what ought to be, or what ought not to be, but simply what is. It is, however, impossible not to contrast this position of the Peers—some holding aloof from the public affairs of their coun- try, some finding an asylum in obscurity, some mingling with trade, while a noble rabble mingles in every class of society—with the position of the same order at a period of the country not more distant in point of time than that included in the commencement and end of national histories now complete ; as that of Venice, for instance. No less from the earliest day when she emerged from obscurity and established herself on the island of Rialto, until the first plebeian Doge yielded the republic to Napoleon Bonaparte, the nobles of Venice maintained their relative posi- tion. Our Peers seem to belong to a past in the history of their country. The nobles had their Reform Bill day, and took up their governing position at Runnymede in King John's time. It was in the days of Hampden that the gentlemen of Eng- land came forward and asserted their value in the state with some success. The middle classes established themselves by the Reform Bill of Earl Grey. The working classes, maintaining the order of progress, sought their political establishment in " the Charter," but failed. Sullenness and emigration have left that

proletarian problem unsolved ; and in the mean time a totally dif- ferent order, springing chiefly but not exclusively from the middle classes, is stepping forward to take the most conspicuous place— the class of professional men, of leaders in organized commercial companies, and of engineers.

The lovers of progress, the worshipers ofpeace, hail the advance of this class, as bringing us to the eve of a day when positive science and practical intent shall assume the government of the world; but we do not yet see in any of the representative men of this class, individually or collectively, certain qualities without which no order in the world has ever attained to permanent power or to the possession of government—without which political vital- ity seems incapable of self-defence or of gaining the affection of the governed: these are—the love of power for its own sake, and the spirit of sacrifice.