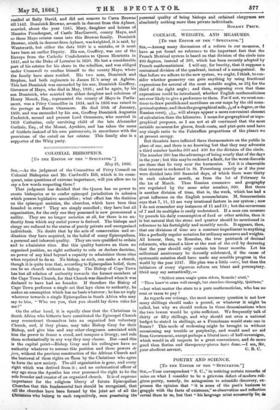 COINAGE, WEIGHTS, AND MEASURES. [ro THE EDITOR OF THE "SPECTATOR."]

Sra,—Among many discussions of a reform in our measures, I have as yet found no reference to the important fact that the French Metrical system is based on that division of the circle into 400 degrees, instead of 360, which has been recently adopted by French mathematicians'. I will say, for brevity, that it supposes a centesimal division of the quadrant, instead of a nonageaimal. So that before we adhere to the new system, we ought, I think, to con- sider whether geometry can gain anything by using fractional expressions for several of the most notable angles, as 33i for the third of the right angle ; and then, supposing even that these expressions could be introduced, whether English mathematicians are ever likely to give a preference to them. For if not, we must con- tinue to draw parallels and meridians on our maps by the old none- gesimal system; and then thegeographical mile, ,-1,6 of a degree, or the Russian verstj, Tim, will always appear a more convenient element of calculation than the kilometre. I mean for geographical or topo- graphical purposes, as I am not at all convinced that the most suitable measures for gloves, frock-coats, and pint-pots need have any simple ratio to the Falstaffian proportions of the planet we at present occupy.

But theorists have inflicted three thermometers on the public in place of one, and there is no knowing but that they may advocate a third number besides 360 and 400 for the division of the circle. The number 360 has the advantage of being nearly that of the days in the year ; but this maybe reckoned a fault, for the worst discords are those that lie very near the harmonies. Yet it is observable that interest is reckoned in St. Petersburg exactly as if the year were divided into 360 financial days, of which there were thirty in each calendar month, as from the 1st of February to the 1st of March. Thus Russian commerce and geography are regulated by the same solar number, 360. But there is another division of time, that is, the week, which has had a great influence on the English nomenclature. M. Sonnenschein says that 7, 11, 13 are very irrational factors in our system ; now I do not remember any instances of 11 and 13; but the occurrence of 7 and its multiples is easily understood. If a man can measure by pounds his daily consumption of food or other articles, then it is but natural that the stone and quarter should be mentioned in reference to his fortnightly and monthly needs. It appears, then, that our divisions of time are a constant impediment to anything like a perfectly regular notation for ordinary measures and weights. All honour, then, to Romulus, the true patriarch of decimal reformers, who aimed a blow at the root of the evil by decreeing that the year should only contain ten lunar months. Let his millesimal anniversary be devoutly celebrated, if the cause of systematic notation shall have made any sensible progress in the world by the year 2247. His plan was a little outré, but then the initiators of every vigorous reform are blunt and peremptory. Ovid may say sarcastically,— " Scilicet arms magis Tram sidera, Romule! nesti,"

—but what matter the stars to a pure mathematician, who has no rent or taxes to pay ?

As regards our coinage, the most necessary question is not how many shillings should make a pound, or whatever it might be called, but why we should reckon in three denominations when the two lowest would be quite sufficient. We frequently talk of thirty or fifty shillings, and why should not even a national budget be stated in shillings, as a Frenchman would state one in francs? This mode of reckoning might be brought in without occasioning any trouble or perplexity, and would need no aid from Government, except perhaps a liberal issue of half-sovereigns, which would in all respects be a great convenience, and do more good than florins and threepenny-pieces have done.—I am, Sir,