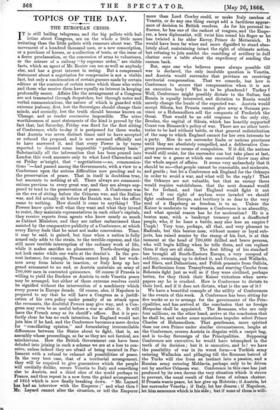 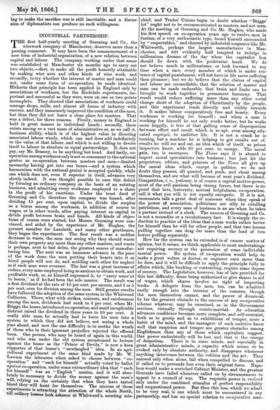 IT is still hailing telegrams, and the big pellets with bul- letins about Congress, are on the whole a little more irritating than the little pellets with rumours about war. The movement of a hundred thousand men, or a new conscription, or a purchase of horses, or a collection of tents, or the issue of a fierce proclamation, or the concession of arms to volunteers, or the seizure of a railway "by supreme order," are visible facts, which an agent of Mr. Reuter can see as well as anybody else, and has a great interest in seeing. But a compressed statement about a negotiation for compromise is not a visible fact, but only a condensation of certain guesses made by certain editors at the contents of certain notes which those who write and those who receive them have equally an interest in keeping profoundly secret. Affairs like the arrangement of a Congress are not transacted through despatches, but through notes and verbal communications, the nature of which is guarded with extreme jealousy, first, lest the Sovereigns should change their minds, and secondly, lest the truth should become known on 'Change, and so render concussion impossible. The utter worthlessness of most statements of the kind is proved by the fact that, last Saturday, Friday was fixed for the first sitting of Conference, while to-day it is postponed for three weeks, that Austria was seven distinct times said to have accepted or refused the proposal, and is now assumed officially not to have answered it, and that every Power is by turns reported to demand some impossible "preliminary basis." Substantially all the information that has been poured into London this week amounts only to what Lord Clarendon said on Friday se'nnight, that "negotiations—no, communica- tions "—had passed among the Governments, with a view to a Conference upon the serious difficulties now pending and to the preservation of peace. That in itself is doubtless true, but amounts to nothing at all. There always are communi- cations previous to every great war, and they are always sup- posed to tend to the preservation of peace. A Conference was on the eve of sitting before the Crimean war, and the Italian war, and did actually sit before the Danish war, but the effort came to nothing. How should it come to anything ? The Powers know quite well what they want and what they intend to resist, they maintain representatives in each other's capitals, they receive reports from agents who know nearly as much as Cabinet Ministers, and they are rather embarrassed than assisted by the comparative publicity of a Conference, at which every Envoy feels that he must not make concessions. Time, it may be said, is gained, but time when a nation is fully armed only adds to the strain, to the terrible expense, and the still more terrible interruption of the ordinary work of life, while it makes sacrifice no pleasanter. Tooth-drawing does not look easier while one waits at the dentist's. In the pre- sent instance, for example, Prussia cannot keep all her work- men away from labour in inaction, or Italy keep up her grand armament to no end, or Austria maintain an army of 700,000 men in contented quiescence. Of course if Prussia is willing to yield the Duchies or Austria to cede Venetia peace may be arranged, but either of those extreme resolves could be signified without the intervention of a machinery which every power in Europe dreads. Of course, also, if Napoleon is prepared to say that he will have a Congress as a justifi- cation of his own policy under penalty of an attack upon the recusants, the doubtful Powers may give way, and a Con- gress may even be as useful before a war as after it. It will have the French army as its sheriff's officer. But it is per- fectly clear he has no such intention, for England would not join him if he had, and the Conference becomes a mere device for "conciliating opinion," and formulating irreconcilable differences between the States about to fight, that is' an assembly whose proceedings, so far as they are not farcical, are mischievous. How the British Government can have been deluded into joining in such a scheme we are at a loss to con- ceive, unless indeed they are afraid of being taunted in Par- liament with a refusal to exhaust all possibilities of peace. In the very best case, that of a territorial arrangement, they will be required to give guarantees which the people will cordially dislike, secure Venetia to Italy and something else to Austria, and a third slice of the 7orld perhaps to France, and thus repeat in a new form the grand arrangement of 1815 which is now finally breaking down. "Mr. Layard haft had an interview with the Emperor ;" and what then? Mr. Layard cannot alter the situation, or tell the Emperor

more than Lord Cowley could, or make Italy careless of Venetia, or do any one thing except add a factitious appear- ance of decision to British resolves. As for his personal in- fluence, he has one of the rashest of tongues, and the Empe- ror, a born diplomatist, will twist him round his finger as he has twisted a far abler Envoy, Prince de Metternich. It would have been far wiser and More dignified to stand abso- lutely aloof, maintaining intact the right of ultimate action, but refusing to join amidst the rumbling of artillery in dull chatter over a table about the expediency of sending the cannon back.

But, says one who believes peace always possible till war is declared, the only insoluble question is Venetia, and Austria would surrender that province on receiving. territorial compensation. That we concede, but how is Conference to secure that compensation when it is not an executive body? Who is to be plundered ? Turkey?' Well, Conference might possibly dictate to the Sultan; but Russia is equally interested, and dictation to Russia would merely change the locale of the expected war. Austria would accept Silesia, but Prussia cannot give away a German pro- vince or a Hohenzollern sell the conquests of Frederick the Great. That would be an odd response to the only city, Breslau, the capital of Silesia, which has heartily supported Count von Bismarck's policy of war. There are no other terri- tories to be had without battle, or that general redistribution of the map to which England cannot for her awn interests be a party. Men do not surrender limbs or nations provinces until they are absolutely compelled, and a deliberative Con- gress possesses no means of compulsion. If it did, the nations would still resist, for the surrender can but take place at last, and war is a game at which one successful throw may alter- the whole aspect of affairs. It seems very melancholy that it should be so—that people cannot be reasonable, and moderate, and gentle ; but let a Conference ask England for the Orkneys in order to avoid a war, and what will be the reply? That the Orkneys are not valuable, but that an enemy there would require watchfulness, that the next demand would be for Ireland, and that England would fight it out first. If our right of asylum were invaded we should fight coalesced Europe, and territory is as dear to the .very soul of a Hapsburg as freedom is to us. Unless the Kaiser is moderate to weakness a Conference is an absurdity, and what special reason has he for moderation? He is a beaten man, with a bankrupt treasury and a disaffected people, who, if he loses a battle, may also lose an empire Umph 1 Very true, perhaps, all that, and very pleasant to Radicals, but this beaten man, without money or loyal sub- jects, has raised armies by the stamp of his foot, is at this moment at the head of 700,000 drilled and brave persons,. who will begin killing when he tells them, and can replace them if they are all slain. The first lifting of his standard has brought all South-Eastern Europe, a very cesspool of soldiery, swarming up to defend it, and Croats, and Wallacks, and Slays, and Dalmatians, and Polish peasants from Galicia,. and Ruthenians from Transylvania, and starving Czechs from Bohemia fight just as well as if they were civilized, perhaps better, for they think their Kaiser victorious when news- papers say he is crushed. How is Conference to dictate ta their lord, and if it does not dictate, what is the use of it?

We have a beautiful example of the utility of Conferences in the events of this week. A Conference has been sitting for five weeks or so to arrange for the government of the Prin- cipalities, and has arrived at the conclusion that no foreign Hospodar shall be appointed. The Roumans, who are only four millions, on the other hand, arrive at the conclusion that he shall be, and under some mysterious impulse select Prince Charles of Hohenzollern. That gentleman, more spirited than our own Prince under similar circumstances, laughs at the Conference, crosses Austria in disguise with a carpet bag, and is to-day Sovereign of the Principalities. Supposing Conference not executive, he would have triumphed in the

teeth of its decision ; but it is executive, and lo1 we have the possibility of war in its worst form—a Turkish army

entering Wallachia and pillaging till the Rouman hatred of the Turks will rise from an instinct into a passion, and a Russian army entering Moldavia, perhaps only to be driven out by another Crimean war. Conference in this case has just produced by its own decree the very situation which it strove to prevent, the usual result of that form of solemn chatter-.

If Prussia wants peace, let her give up Holstein; if Austria, let her surrender Venetia ; if Italy, let her disarm ; if Napoleon, let him announce which is his side ; but if none of them is will-

ing to make the sacrifice war is still inevitable, and a discus- sion of diplomatists can produce no such willingness.