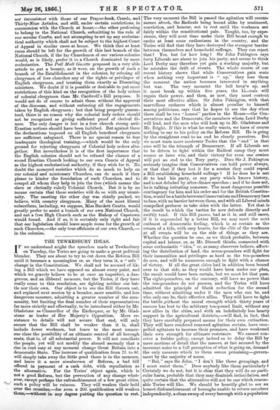 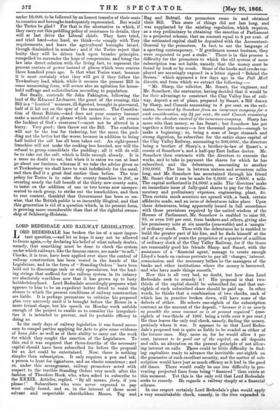 "But," says Sir John, "I don't like these groupings, and I must resist them." Does anybody like them particularly Certainly we do not, but it is clear that they will do no parti- cular harm, probable that they may diminish intimidation, and quite certain that the alternative will not be one which reason- able Tories will like. We should be heartily glad to see an honest disfranchisement of boroughs unable to return members independently, a clean sweep of every borough with a population

under 10,000, to be followed by an honest transfer of their seats to counties and boroughs inadequately represented. But would the Tories be glad For that is the alternative to which, if they carry out this peddling policy of resistance to details, they will at last drive the Liberal chiefs. They have tried, and tried hard—too hard, we think—to comply with Tory requirements, and leave the agricultural boroughs intact, though diminished in number ; and if the Tories reject• that lenity they will be driven back upon broader principles, compelled to surrender the hope of compromise, and bring the law into direct relation with the living fact, to represent the present centres of power instead of places which were centres three hundred years ago. Is that what Tories want, because it is most certainly what they will get if they follow the Tewkesbury lead, which, while it secures the present Bill in some unmeaning form, will secure also an agitation for house- hold suffrage and redistribution according to population.

But finally, contends Sir John Pakington, following the lead of Sir Edmund Lechmere, the guest of the evening, this Bill is a " hurried " measure, ill digested, brought in piecemeal, half of it hit out on the spur of the moment. The Constitu- tion of Great Britain,—and does not your country baronet make a mouthful of a phrase which makes him at all events the luckiest of God's creatures ?—must not be altered in a hurry. Very good ; then throw out the Bill. The confusion will not be the less for tinkering, but the more, the pud- ding not the better but the worse, because in addition to being half boiled the salt has all been taken out. An eight-pound franchise will not make the cooking less hurried, nor will the refusal to group consolidate the pudding ; all it will do will be to take out the salt, which is little enough already. It is a mess no doubt to eat, but when it is eaten we can at least go about our business, whereas if we take the advice given us at Tewkesbury we shall have to wait indefinitely for the meal, and then find it a great deal nastier than before. The true policy for Tories is to raise the county franchise to 20/., so securing nearly the full benefit of the thirty new county seats, to insist on the addition of one or two towns now unrepre- sented to each group, to strike out the leaseholders, and then to rest content, thankful that Government has been so un- wise, that the British public is so incurably illogical, and that this generation is rid of a question which, in its present form, is growing more unendurable than that of the rightful owner- ship of Schleswig-Holstein.