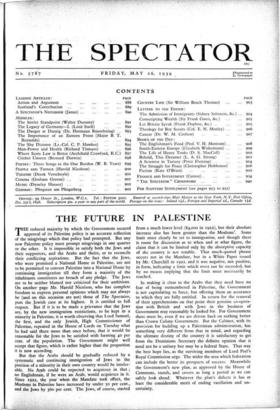 THE FUTURE IN PALESTINE

THE reduced majority by which the Government secured approval of its Palestine policy is an accurate reflection of the misgivings which that policy had prompted. But any new Palestine policy must prompt misgivings in one quarter or the other. It is impossible to satisfy both the Jews and their supporters, and the Arabs and theirs, or to reconcile their conflicting aspirations. But the fact that the Jews, who were promised a National Home in Palestine, are not to be permitted to convert Palestine into a National Home by continuing immigration till they form a majority of the inhabitants constitutes no breach of any pledge. The Jews are to be neither blamed nor criticised for their ambitions. On another page Mr. Harold Nicolson, who has complete freedom to express personal opinions which may not always be (and on this occasion are not) those of The Spectator, puts the Jewish case at its highest. It is entitled to full respect. But if it is to be made a grievance that the Jews are, by the new immigration restrictions, to be kept in a minority in Palestine, it is worth observing that Lord Samuel, the first, and the only Jewish, High Commissioner of Palestine, repeated in the House of Lords on Tuesday what he had said there more than once before, that it would be reasonable for the Jews to be satisfied with forming 40 per cent. of the population. The Government might well accept that figure, which is rather higher than the proportion it is now according.

But that the Arabs should be gradually reduced by a systematic and continuing immigration of Jews to the position of a minority in their own country would be intoler- able. No Arab could be expected to acquiesce in that ; no Englishman, if he were an Arab, would acquiesce in it. Since 1922, the year when the Mandate took effect, the Moslems in Palestine have increased by under 50 per cent., and the Jews by 360 per cent. The Jews, of course, started from a much lower level (84,000 in 1922), but their absolute increase also has been greater than the Moslems'. Some limit must clearly be set to immigration, and though there is room for discussion as to when and at what figure, the claim that it can be limited only by the absorptive capacity of the country is not tenable. That much-quoted phrase occurs not in the Mandate, but in a White Paper issued by Mr. Churchill in 1922, and it was negative, not positive, in form, indicating a limit which must not be exceeded, but by no means implying that the limit must necessarily be reached.

In making it clear to the Arabs that they need have no fear of being outnumbered in Palestine, the Government is not capitulating to force, but offering them an assurance to which they are fully entitled. In return for the removal of their apprehensions on that point their genuine co-opera- tion with British and with Jews in the business of Government may reasonably be looked for. For Government there must be, even if we are driven back on nothing better than Crown Colony Government. But the Cabinet; with its provision for building up a Palestinian administration, has something very different from that in mind, and regarding the ultimate destiny of the country it is satisfactory to get from the Dominions Secretary the definite opinion that it need not be a unitary but may be a federal State. That way the best hope lies, as the surviving members of Lord Peel's Royal Commission urge. The wider the area which federation can include the better its prospects of success. Meanwhile the Government's new plan, as approved by the House of Commons, stands, and covers as long a period as we can safely look ahead. Whatever the plan's defects it has at least the considerable merit of ending vacillation and un- certainty.