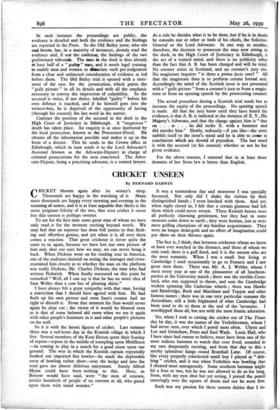 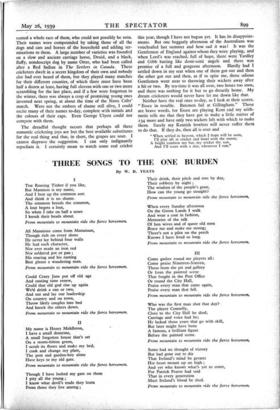 CRICKET blooms again after its winter's sleep. Thousands are happy in the watching of it. Many more thousands are happy every morning and evening in the scanning of scores, and it is at least arguable that theirs is the more poignant felicity of the two, that seen cricket is sweet but that unseen is perhaps sweeter.

To see for the first time some great man of whom we have only read is for the moment exciting beyond words. We may feel that no reporter has done full justice to that flash- ing and effortless genius, and yet when it is all over there comes a reaction. That great cricketer is never quite the same to us again, because we have lost our own picture of him and, shut our eyes how we may, we can never bring it back. When Dickens went on his reading tour in America, one of the audience insisted on seeing the manager and cross- examined him closely as to whether the man on the platform was really Dickens, Mr. Charles Dickens, the man who had written Pickwick. When finally reassured on this point he remarked "Well, all I can say is that he has no more idea of Sam Weller than a cow has of pleating shirts."

I have always felt a great sympathy with that man, having a conviction that I should have agreed with him. He had built up his own picture and even Sam's creator had no right to disturb it. From that moment his Sam would never again be clear cut ; the vision of it would be blurred even as is that of some beloved old room when we see it again with other people's furniture in it and other people's pictures on the wall.

So it is with the heroic figures of cricket. Last summer there was a red-letter day in the Kentish village in which I live. Several members of the Kent Eleven spent their Sunday of repose—repose in the middle of trampling upon Middlesex —in coming to play in a match for a good cause upon our ground. The way in which the Kentish captain repeatedly hooked our imported fast bowler—he made the deplorable error of bowling rather short—over the hedge and into the road gave me almost delirious enjoyment Surely Alfred Mynn could have been nothing to this. Here, as Borrow would have said, were "the men of renown, amidst hundreds of people of no renown at all, who gazed upon them with timid wonder." It was a tremendous day and moreover I was specially favoured. Not only did I shake the visitors by their distinguished hands ; I even lunched with them. And yet, when night closed in, I felt that a certain glamour had left them which could never return. These Kentish heroes were all perfectly charming gentlemen, but they had in some measure come down to earth ; they were human, just as were mere golfing champions of my familiar acquaintance. They were no longer demi-gods and no effort of imagination could put them on their thrones again.

The fact is, I think, that between cricketers whom we know or have ever watched in the distance, and those of whom we only read, there is a gulf fixed, and it is the unseen who are the most romantic. When I was a small boy living at Cambridge I used occasionally to go to Fenners and I saw great men there. There was Mr. A. J. Webbe, whom I meet every year at one of the pleasantest of all luncheon- parties at the University match ; there was the terrible Cross- land, who was supposed to throw, and sent the Cambridge wickets spinning like Catherine wheels ; there was Hawke and Bainbridge, Rock and Marchant and Toppin and other famous names ; there was in one very particular summer the Australians, still a little frightened of what Cambridge had been used to do to them at the end of the 'seventies. I worshipped them all, but not with the most frantic adoration.

No, when I took to cutting the cricket out of The Times day by day, it was the names of the Yorkshiremen, whom I had never seen, over which I pored most often. Ulyett and Lee and Grimshaw, Peate and Saul Wade. Louis Hall, who I have since had reason to believe, must have been one of the most tedious batsmen to watch that ever lived, sounded in my ears desperately exciting, and from that day to this a murky splendour hangs round Bramhall Lane. Of course, like every properly constituted small boy I played at " dab- bing " cricket, and it was when Yorkshire was bowling that I cheated most outrageously. Some southern batsman might hit a four or two, but he was not allowed to do so for long. Soon, with my eyes shut but yet seeing, I poised the pencil unerringly over the square of doom and out he went lbw.

Such was my passion for these unseen deities that I in- vented a whole race of them, who could not possibly be seen. Their names were compounded by taking those of all the dogs and cats and horses of the household and adding ter- minations to them. A large number of varieties was founded on a slow and ancient carriage horse, Druid, and a black, fluffy, nondescript dog by name Otter, who had been called after a Red Indian in The Settlers in Canada. These cricketers dwelt in a secret kingdom of their own and nobody else had ever heard of them, but they played many, matches for their different counties, of which there must have been half a dozen at least, having full elevens with one or two more scrambling for the last place, and if a few were forgotten in the winter, there was always a crop of promising young ones invented next spring, at about the time of the Notts Colts' match. Were not the embers of shame still alive, I could recite many of their names to-day, complete with initials and the colours of their caps. Even George Ulyen could not compete with them.

The dreadful thought occurs that perhaps all these romantic cricketing joys are but the best available substitutes for the real thing and that, in short, the grapes are sour. I cannot disprove the suggestion. I can only indignantly repudiate it. I certainly mean to watch some real cricket this year, though I have not begun yet. It has its disappoint- ments. But one beggarly afternoon of the Australians was vouchsafed last summer and how sad it was! It was the Gentlemen of England against whom they were playing, and when Lord's was reached, full of hope, there were Yardley and Gibb batting like denai-semi angels and there was promise of a full and gorgeous afternoon. Hardly had I settled down in my seat when one of them got out and then the other got out and then, as if to spite me, those odious Gentlemen went near to throwing their wickets away after a hit or two. By tea-time it was all over, two hours too soon, and there was nothing for it but to go drearily home. My dream cricketers would never have let me down like that.

Neither have the real ones to-day, as I look at their scores. "Essex in trouble. Batsmen fail at Gillingham." Those are brave words, for Essex are playing Kent and my arith- metic tells me that they have got to make a little matter of 134 more and have only two wickets left with which to make them. Surely my Kentish bowlers will never suffer them to do that. If they do, then all is over and

"When settled in heaven, which I hope will be soon, I'll play oft at cricket and bowl with the moon; A bright rainbow my bat, my wicket the sun, And I'll score with a star, whenever I run."