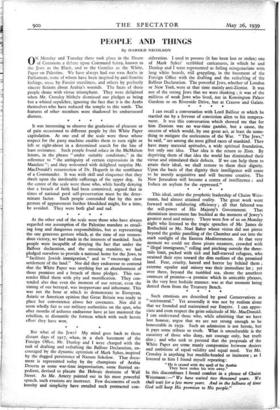 This ideal, under the prophetic leadership of Chaim Weiz- mann,

had almost attained reality. The great work went forward with unfaltering efficiency ; all that faltered was the will-power of His Majesty's Government. That aluminium instrument has buckled at the moment of Jewry's greatest need and misery. There were few of us on Monday night who listened to the tragic speeches of Mr. James de Rothschild or Mr. Noel Baker whose vision did not pierce beyond the gothic panelling of the Chamber and out into the stark sunlight of the Eastern Mediterranean. At that very moment we could see those pirate steamers, crowded with "illegal immigrants," rolling and pitching outside the three- mile limit, packed with sick and half-starved refugees, who strained their eyes toward the dim outlines of the promised land. Fear, cruelty, hatred and horror lay behind them ; extreme squalor and misery was their immediate lot ; yet over there, beyond the tumbled sea, shone the amethyst contours of promise—a promise which in amicable phrases, in the very best bedside manner, was at that moment being denied them from the Treasury Bench.