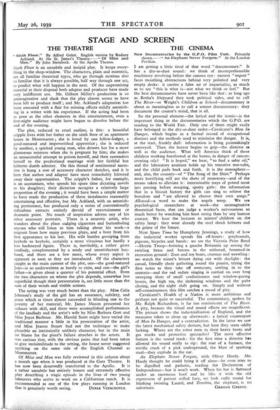 "Sixth Floor." By Alfred Gehri. English version by Rodney Ackland. At the St. James's Theatre.—" Of Mice and Men." By John Steinbeck. At the Apollo Theatre.

Sixth Floor is an unsubtle and insipid play. It keeps every- thing in the shop-window. The characters, plain and eccentric, are all familiar theatrical types, who go through motions also so familiar that it is always possible, half way through one act, to predict what will happen in the next. Of the unpromising material at their disposal both adapter and producer have made very indifferent use. Mr. Gilbert Miller's production is so unimaginative and slack that the play almost seems to have been left to produce itself ; and Mr. Ackland's adaptation has been executed with a flair for missing effects mildly astonish- ing in a writer with his experience. If the acting had been as poor as the other elements in this entertainment, even a first-night audience might have begun to dissolve before the end of the evening.

The plot, reduced to cruel outline, is this: a beautiful cripple lives with her father on the sixth floor of an apartment house in Montmartre ; she is loved by one fellow-lodger, a good-natured and impoverished apprentice ; she is seduced by another, a spirited young man, who deserts her for a more glamorous mistress when she is pregnant by him; she makes an unsuccessful attempt to poison herself, and then surrenders herself to the predestined marriage with her faithful but hitherto dumb admirer. On this thread of sentimental narra- tive is hung a row of accessory character sketches, and it is here that author and adapter have most remarkably frittered away their opportunities. The cripple's father, for example, is an accountant, who spends his spare time dictating novels to his daughter; their dictation occupies a relatively large proportion of the evening ; it would have been a simple matter to have made the production of these instalments reasonably entertaining and effective, but Mr. Ackland, with an astonish- ing persistence, has produced only a series of conventionally ridiculous extracts entirely devoid of entertainment or dramatic point. No touch of inspiration adorns any of his other accessory portraits. There is a neurotic artist, who wanders about the place cadging cigarettes and buttonholing anyone who will listen to him talking about his work—a migrant from how many previous plays, and a bore from his first appearance to his last. His wife bustles gossiping from keyhole to keyhole, certainly a more vivacious but hardly a less hackneyed figure. There is, inevitably, a rather gross landlady, complemented by a seedy and unsatisfactory hus- band, and there are a few more, whose every aspect is apparent as soon as they are introduced. Of the characters caught in the main current of the plot, one—the good-natured Jojo—is so underwritten as barely to exist, and one—the girl's father—is given about a quarter of his potential effect. Even the two characters on whom the plot depends, somewhat less superficial though their presentation is, are little more than the sum of their words and visible actions.

The acting was very much better than the play. Miss Celia Johnson's study of the girl has an assurance, subtlety, and grace which at times almost succeeded in blinding one to the poverty of her material; Mr. James Mason presented her seducer with skill, and there were accomplished performances of the landlady and the artist's wife by Miss Barbara Gott and Miss Joyce Barbour. Mr. Harold Scott might have varied the traditional manner a little in his presentation of the artist, and Miss Jeanne Stuart had not the technique to make plausible an intrinsically unlikely character, but in the main

no blame for the piece's failure attaches to the actors. It was curious that, with the obvious pains that had been taken to give verisimilitude to the setting, the house never suggested anything on the same side of the English Channel as Montmartre.

Of Mice and Men was fully reviewed in this column about a month ago when it was produced at the Gate Theatre. It

has now been deservedly transferred to the Apollo. It is a rather unsubtle but entirely honest and extremely effective play describing a tragic episode in the lives of two young labourers who arrive to work on a Californian ranch. It is recommended as one of the few plays running in London