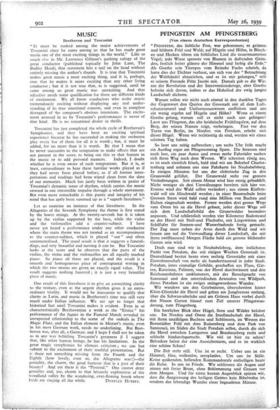 "IT must be ranked among the major achievements of Toscanini since he came among us that he has made great music one of the most exciting things in the world." Like so much else in Mr. Lawrence Gilman's gushing eulogy of the great conductor (published topically by John Lane, The Bodley Head), that statement hits a nail on the head without entirely missing the author's thumb. It is true that Toscanini makes great music a most exciting thing, and it is, perhaps, true that he makes it more exciting than any other living conductor ; but it is not true that, as is suggested, until he came among us great music was unexciting. And that adjective needs some qualification for there are different kinds of excitement. We all know conductors who make music tremendously exciting without displaying any real under- standing of its true emotional content, and even in complete disregard of the composer's obvious intentions. The excite- ment aroused in us by Toscanini's performances is never of that kind. He is no sensational dealer in thrills.

Toscanini has just completed the whole cycle of Beethoven's Symphonies, and they have been an exciting spiritual experience because he has succeeded in making the orchestra play every bar of them for all it is worth ; but, it must be added, for no more than it is worth. By that I mean that he never succumbs to the temptation to make effects that are not present in the score, to bring out this or that feature in the music or to add personal nuances. Indeed, I doubt whether he is even aware of such temptations. But it is, at least, extraordinary to hear these familiar works played as if they had never been played before, as if all former inter- pretations and readings had been wiped clean from the slate of our memories. Much has justly been written in praise of Toscanini's dynamic sense of rhythm, which carries the music onward in one irresistible impulse through a whole movement. But even more remarkable is this purity and integrity of his mind that has aptly been summed up as a "superb literalness."

Let us examine an instance of that literalness. In the Allegretto of the Seventh Symphony the theme is first stated by the lower strings. At the twenty-seventh bar it is taken up by the violins supported by the bass, while the violas and the violoncellos add a counter-subject. I have never yet heard a performance under any other conductor where the main theme was not treated as an accompaniment to the counter-subject, which is played " out " and often sentimentalised. The usual result is that it suggests a funeral- dirge, and very beautiful and moving it can be. But Toscanini looks at the score and he observes that the parts of the violins, the violas and the violoncellos are all equally marked piano. So piano all three are played, and the result is a smooth and homogeneous piece of contrapuntal writing in which the two strains are given an exactly equal value. The result suggests nothing funereal ; it is just a very beautiful piece of music.

One result of this literalness is to give an astonishing clarity to the texture, even as the urgent rhythm gives it an extra- ordinary vitality. It would not be inaccurate to qualify that clarity as Latin, and music in Beethoven's time was still very much under Italian influence. We are apt to forget that historical fact until Toscanini makes it evident. Even in so characteristically Beethovenian a work as the "Eroica " his performance of the fugato in the Funeral March revealed its unexpected relationship to the scene of the ordeals in The Magic Flute, and the Italian element in Mozart's music, even in his most German work, needs no underlining. But Beet- hoven was, after all, a German. and I hope I shall not be taken as in any way belittling Toscanini's greatness if I suggest that, like other human beings, he has his limitations. In the great tragic symphonies he silences criticism ; we can but submit to the excitement of their truthful presentation. But is there not something missing from the Fourth and the Eighth (how lovely, even so, the Allegretto was !)—the geniality, the charm, the good humour that is a part of their beauty? And yet there is the "Pastoral." One cannot deny geniality and, yes, charm to that leisurely exploration of the woodland valley by the wandering, ever-flowing brook where birds are singing all the while. DYNELEY HUSSEY.